Review: A Weekend with Mr. Darcy by Victoria Connelly 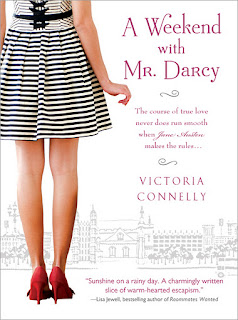 Surrounded by appalling exes and fawning students, the only thing keeping professor Katherine Roberts sane is Jane Austen and her personal secret love for racy Regency romance novels. She thinks the Jane Austen Addicts conference in the English countryside is the perfect opportunity to escape her chaotic life and finally relax...

But then she encounters a devilishly handsome man at the conference who seems determined to sweep her off her feet. Is he more fiction than fact? Or could he be the hero she didn't know she was looking for?

In a sea of novels that seek to capitalize on Jane Austen's enduring popularity, A Weekend with Mr. Darcy stands apart by not opting to retell the canon, but instead telling a story of Jane's most ardent fans -- those who can never get enough of the books, films, and retellings. Katherine Roberts is a respected Oxford professor whose professional expertise is all things Austen-related and whose secret passion is the "low-brow" popular Regency romances by the prolific author Lorna Warwick. Katherine much prefers Austen and Lorna's fictional heroes, since her own real-life attempts at happily-ever-afters have resulted in betrayal and heartache. Robyn Love is a receptionist, a romantic idealist stuck in a dead-end relationship and job whose only solace is Jane and her beloved film adaptions -- she'd rather escape from reality than face it head-on. Both Katherine and Robyn meet at a weekend Jane Austen Conference, little expecting that the conference will challenge their Austensian perceptions and change their lives forever. The "course of true love never did run smooth," particularly in an Austen novel, as Katherine and Robyn discover when they find themselves the heroines of dramas they never expected to live, and must each decide if real-life love stories are worth the risk, leaving them to answer one question -- what would Jane Austen do?

The setting for Katherine and Robyn's conference, the fictional Purley Hall, is worthy of any film adaptation of Austen's work, and thus the stage is set for romance in true Regency style, replete with moonlit encounters in lush gardens and misunderstandings and engagements, and secret identities! So many of the books that tout themselves as Austen sequels or retellings tread familiar territory, attempting to re-interpret the canon or capitalize on the public's insatiable appetite for anything that smacks of her heroes -- Darcy, Wentworth, Tilney, etc. Connelly makes the smart move of opting not to retell a classic story or translate it to the present day, instead focusing on individuals that make up the phenomenon known as Austen fanatics -- people who can't get enough of her books, the retellings, the inspired-bys, and the film versions. Somewhat similar to Shannon Hale's Austenland, A Weekend with Mr. Darcy is wish-fulfillment of the highest order for an Austen aficionada, perhaps all the moreso because its setting, a academic conference, is so "normal," lending a delightful aura of possibility to the tale.

Connelly plays to the most ardent Austen fan, giving acknowledgement to everything from the Colin Firth-as-Darcy mania to the unlikely mash-ups (i.e., Pride and Prejudice and Zombies). And while acknowledging many a woman's dream of measuring all men against the "perfect" Mr. Darcy, through Katherine and Robyn's romantic misadventures Connelly reminds readers that one's perfect match may be found where he's least expected (such a man - spoiler! - writing under a female pseudonym). Each woman's story has its charms, but I must admit to being particularly impressed with the unexpected depth of Robyn's story and her entirely unsuitable long-term boyfriend, touching on family tragedy and the temptation of staying in a relationship out of guilt. A Weekend with Mr. Darcy is a fresh spin on the on-going mania for capitalizing on Austen's enduring popularity. Connelly peppers her story with many nods to the many film adaptations that are so popular they've become canon (thanks in great part to deliciously-cast heroes *wink*), balanced with characters who no matter how extreme their fandom runs, are drawn with gentle humor and warmth on the page. Connelly's first foray into the realm of Austenesque fiction is a gem, a frothy and fun slice of escapism for anyone who has ever fallen for one of Austen's immortal heroes.
Posted by Unknown at 3:18 PM

Thanks so much for posting! Can't wait to get this book!! Enjoy your blog (I admit to being a blurker!!)

@Jenelle - Oh you're welcome & thank you! Now that you're officially no longer a "blurker" (that made me laugh out loud!!), I hope you're come back and let me know what you think of this one! :)

Great review. I haven't had a lot of luck with Austen wannabe writers. Love the premise of this one. It has been on my list and sounds terrific.

@Holly - Hope you enjoy it! I think the main reason this one worked for me was because it wasn't TRYING to retell Pride & Prejudice or anything like that...it was more a story about the fans. :)