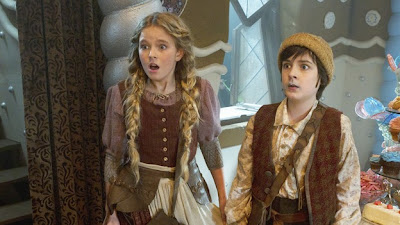 Sorry about the delay in posting a recap/review of this week's episode of Once Upon a Time, but I've been sidelined with a horrible cold/sinus infection for most of the week. I HATE COLDS. All this to say this post may not make much sense. So let's attempt to talk about something fun, shall we? :) This episode introduced two more classic fairy characters to the realm of Storybrooke -- Hansel and Gretel. And much like the Cinderella-centric episode from earlier this year, the plight of these fairy tale characters provides a great window through which we're given insight into Emma's (Jennifer Morrison) past, an opportunity to see what makes her "tick."
The episode opens with Henry (Jared Gilmore) reading a Hulk vs. Wolverine comic (how frakkin' adorable is that?!). A young girl, Ava a.k.a. Gretel (Karley Scott Collins) introduces herself and Henry is instantly pierced by Cupid's arrow. You can just see him flash "Isn't she pretty?" and "She's talking to me?!" and "Maybe I'm going to make friends MY OWN AGE!" Sadly Henry's hopes of befriending Ava and her brother Nicholas a.k.a. Hansel (Quinn Lord) are crushed when he discovers that the pair only befriended him in order to use his handy backpack to shoplift assorted snacks and personal care items. At this point I was ready to smack Ava upside the head -- no one messes with Henry!!
In Fairy Tale Land we see the Hansel and Gretel story play out very similar to tradition, with a few exceptions -- the children's father (Nicholas Lea) gives Gretel a compass, a family heirloom, before sending the pair out to collect wood, along with words to live by -- "family should always be able to find each other." When the children can't find their father they (conveniently for her) run into the Evil Queen (Lana Parrilla), who blackmails them into retrieving an object for her from the Blind Witch's (Emma Caulfield) house, in return for its successful retrieval she promises to reunite the children with their MIA father. First thing's first, how awesome was it to see the Evil Queen really living up to her name, performing some sort of apparating magic and exploiting helpless kids? Yes we had the whole horrifying "I collect hearts" revelation, but there was something about her actions in this episode, the exploiting of kids, that brought a whole new level of meaning to the evil in her moniker.
Back in Storybrooke, Emma discovers that the two children have been living on their own, with a dead mother whom no one seems to remember and no record of who their father is or where he could be found. Given her own past in the foster system, Emma's determined these kids won't suffer the same fate -- being separated, unloved, etc., and resolves to find their missing dad. Emma takes Ava's compass as a clue, and interestingly enough it is Mr. Gold (Robert Carlyle) who provides her with the name of the children's father. This is one of those moments that make Gold such a fascinating character -- this *seems* to be a really nice thing to do, but given his past actions we know we shouldn't trust him -- so the question remains, why is he being helpful? Is this only to undermine Regina or is there more to the story? 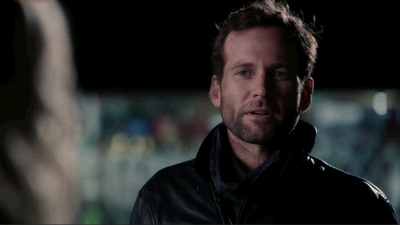 Emma's attempts to convince the children's father, now an auto mechanic named Michael, to step up really gives Morrison a chance to shine in the acting department. Emma's regret over giving up Henry has an almost palpable ache, and I just love seeing how much she's changed in just the brief time she's known her son (I thought it was interesting that apparently all that's happened this season has taken place in just a month's time, did anyone else catch it when Emma let that slip?). It just about broke my heart (this show is getting in the habit of that) when Emma fictionalized an account of Henry's father as a hero. It's clear that Henry just adores her, and Emma so desperately wants to live up to his faith in her that it just about kills her to tell him anything about her past. (HUGS ALL AROUND!) I also loved how this episode gave us some great moments where we could see Emma and Mary Margaret (Ginnifer Goodwin) just hanging out, becoming friends -- I suppose one "upside" to this curse (if you want to call it that) is that Mary Margaret and Emma will perhaps skip that awkward teenage parental rebellion phase and skip to the part where you actually realize it might be possible that you can be friends with your parents. *wink*
Back to Storybrooke -- the Blind Witch was extraordinarily creepy, and her house was a sugar lover's dream (I cannot tell you how badly I wanted a cupcake after viewing this episode!). I loved Gretel's moxie (really had trouble buying that these two were supposed to be twins, Gretel had such an older sister vibe) even though she had the worst Fairy Tale Land hair of ALL TIME, and I thought it was neat twist to have the Evil Queen responsible for the Blind Witch's death (who knew she could "throw" magical curses through her mirror?). I thought the reveal that the artifact was THE APPLE of legend was also a nice and unexpected touch. Also fascinating to see the Evil Queen attempt to befriend and "adopt" Hansel and Gretel -- apparently her desire to be loved, to have a family, has deep pre-curse roots, hmm?
So, while the "true north" aspect of this storyline may have lacked subtlety, I confess I was a total sucker for the moment when in Storybrooke the children's compass pointed directly to their father. This show really likes to play with the idea that family and soul mate bonds cannot be denied, a concept that is perhaps subconsciously reawakening Emma's desire to find her birth parents. This brings me to perhaps the most awesome moment of the episode, the final five minutes, where we get Henry and Emma having a lovely mother/son moment and the unthinkable happens. A black leather-clad STRANGER roars into Storybrooke on a motorcycle. The "what the HELL is happening?" looks on Emma and Henry's faces are just priceless, because this is the one thing that's never happened, even since Emma's arrival -- a stranger, with apparently no connections to anyone in Storybrooke, arrives, apparently having been LOOKING for Storybrooke (a.k.a. the town that must be a big black hole on all maps of Maine). But the reason I'm so excited? Said Stranger is played by Eion Bailey, also known as Ben Mercer from Covert Affairs (see picture above, isn't he ADORABLE?!). I adore him on CA to it follows that his tenure on Once, no matter how long or short that may be, is going to be AWESOME. Theories as to the Stranger's real identity and purpose in Storybrooke? Feel free to sound off in the comments!
Posted by Unknown at 12:14 PM

Well, you already know my theory on who he is. I'm just happy that if we had to lose Graham, they didn't waste time in bringing new eye candy in to replace him!

Oh, and about the timeline thing . . . the writers from LOST are accustomed to stretching a short amount of time over a large number of episodes. The first four years of LOST only covered 108 days on the island.

@Kaye - Seriously, amen to that. I couldn't take it if Charming was the only one left on the show...too much pressure. LOL!

Interesting to know about the timeline thing. I just really sat up and took note of that mention Sunday because I fall into this bad habit when watching TV shows of feeling like they take place in "real time." :P

Don't hate me....but I hate him on Covert Affairs =D

My guesses: Gaston (since Beauty and the Beast is coming up) ir for some reason, I cannot hake him being Mr. Gold's son......

@Ella - Aww, no worries. I'm an Annie/Auggie fan myself. :) I just think Ben and the actor who portrays him is pretty awesome. :)

Now...if you visit my Once pinboard on Pinterest, we already know who is playing Gaston so that's out. Mr. Gold's son -- hadn't thought of that but what a possibility!

Ruth, I am a HUGE Auggie/Annie person myself. At least the end of this season showed Annie realizing some sort of feelings for him. If only Auggie wouldn't have.....oh well..........and you will be happy to know that one of these days, I will be trying "White Collar" thanks to you =D

@Ella - Ohmygoodness, at the end of Season 2 of Covert Affairs I was just screaming at the TV for Annie to kiss him already. The way the show "flipped that switch," had Annie turn that corner, oh it was well played indeed!

Can't wait to hear what you think of White Collar!

Are you a Psych fan? If so Gaston should be a familiar face. :)

I've always loved Nicolas Lea--probably a Canadian thing, you know!--so I was glad to see him. I was also excited to see Eion Bailey.

I haven't had a chance to see this episode yet, but ew, Ben on Covert Affairs was so gross.

I like Annie/Auggie together but don't necessarily think writers should romantically link them (umm... yeah that is kind of the ultimate cliche - but then I do like cliches...). Anyway I haven't decided what I think of Ben just yet but I suspect I will once S2 comes to DVD.

I second Ruth's thoughts on White Collar, Ella - cannot wait to read what you think of it. AWESOME show. =)

@Lori - How did I not know that you were watching this show too? Hilarious! Anyways...yeah for random Canadians! And Eion fans! :)

@Rissi - Annie and Auggie are so so perfect for each other, are you kidding me?! LOL! (Now you know where I stand on this issue!) ;) Maybe S2 will change your mind. I will keep my fingers crossed. :)

Perhaps it will, Ruth! I am open to seeing them together romantically, but the whole scenario of two good friends falling for each other has been done so many times, I'd like to think that Annie and Auggie are best kept as best friends - but then, like I said, I am a big fan of cliches. (All one has to do is see all the rom-coms I've reviewed to get that. =D)

@Rissi - I definitely see where you're coming from...but the thing is, S2 really did kind of change my mind...at least as far as Annie's perspective goes. I'll be curious to hear your take on S2 when it comes to DVD!