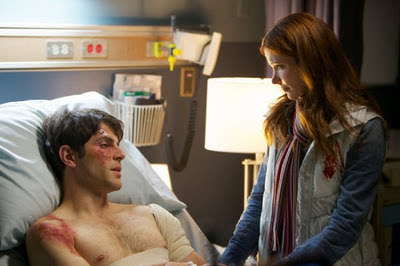 Grimm returned last night after an absence of something crazy like NEARLY A MONTH -- but oh goodness was it worth the wait. The show's take on the "Jack and the Beanstalk" story wasn't mythology-heavy, but rather a superb example of the potential longevity this show has because of how it turns the police procedural inside-out. The hour opens with the horrific murder of a judge, by an ogre/giant of a man with serious rage issues. During their investigation Nick (David Giuntoli) and Hank (Russell Hornsby) trace the murdered judge to another murder victim, found wearing a valuable antique watch which, given Monroe's (Silas Weir Mitchell) clock-making occupation is the perfect excuse to call on his expertise. I LOVE MONROE.

One of the many things I liked about this episode is that Nick being a Grimm has nothing to do with the ogre's activities -- in fact, this case is all about a psychopath seeking revenge on those who jailed him, which includes Hank since he worked the case a couple of years earlier. The show does an excellent job translating the giant of legend into the present day -- their ogre takes the whole "fee fi fo fum, I smell the blood of an Englishman" aspect of the story very seriously. In this universe real-life ogres are "Siegbarste," individuals with a HIGH tolerance for pain (which explains how this ogre can pull bullets out of himself), extremely difficult to kill, and renowned for their ability to hold grudges. Giving the baddie of this hour characteristics of congenital analgesia is just one of the brilliant ways this show makes fairy tales real and plausible.

This episode provides some fantastic insight into Hank's character which I just loved. He is such a driven cop, as the personal nature of this storyline, and being a target of a vengeful felon, reveals. The fact that Nick discovers the perpetrator's fairy tale origins, and can't tell Hank, adds some nice tension to their interactions in this episode. You can see that Nick completely gets Hank's anger, frustration, and sense of responsibility about bringing this killer to justice, while at the same time being completely handicapped because he can't tell Hank that a regular man is incapable of taking this killer down -- a fact he only knows because he's a Grimm. 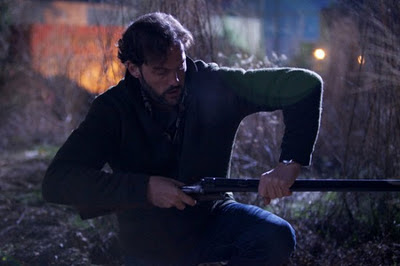 The aftermath of Nick being nearly beaten to death by the ogre in a home invasion provided a great spotlight for his relationship with Juliette (Bitsie Tulloch). First of all, could Nick and Juliette BE any more adorable together? I mean SERIOUSLY! I can hardly take it. *wink* They are on the fast-track to becoming one of my favorite TV couples. Also, I loved the fact that Juliette got to show her strength in this episode -- I could've cheered when she kept her head and threw a pan full of boiling water in the ogre's face. Girl's got game, just sayin'! I got the feeling during Nick and Juliette's post-attack scene in the hospital that Nick was feeling concerned that his status as a Grimm had brought danger home -- thoughts? I couldn't help but recall his Aunt Marie's warning in episode one (if memory serves me correctly), that he should distance himself from Juliette in order to protect her -- I have to wonder if the temptation to do so is going to become more of a factor in the show going forward?

Monroe was BY FAR the star of this episode. He is just amazing, AMAZING! First we get to see him geeking out over the vintage watch Nick and Hank bring him for analysis. Then we get to see him all nice and sweet and concerned over Nick's safety when he learns he's been attacked by a siegbarste. THEN...and this is perhaps my favorite...he seriously geeks out over retrieving the ogre poison in Aunt Marie's stashed trailer. The beautiful, hilarious irony of a blutbad snooping around a Grimm's trailer is absolutely priceless (loved Monroe's shout-out to his dead father, sure to be rolling over in his grave -- HA!). I mean seriously, what is not  to love about Monroe? He drives a VW for goodness' sake! He's just a big, cuddly, wolf-ish, quirky teddy bear. :)

Seeing as this was not a mythology-heavy episode, I was VERY intrigued by Captain Renard (Sasha Roiz) -- I can't WAIT to find out this guy's backstory, as he seems like such a dedicated police captain and supportive boss. THE SUSPENSE IS KILLING ME. *wink* Another winner of an episode -- bring on next week!
Posted by Unknown at 11:56 AM

I found the ogre's violence quite disturbing in this episode. First time it's crossed that line with me. If he's as bad as it gets, as Monroe mentioned, then I hope that's as disturbing as the violence ever gets on this show. I would hate to have to abandon it because....

Everything else about the episode was some of the best I've yet seen. SO glad to have more of Juliet. The discussion here after her turn as giant-slayer wannabe was along the lines of, Nick should tell her the truth because, as you said, the girl's got game. She's also in mortal danger all the time and doesn't know it. She needs the respect and freedom to choose whether to partner up with Nick as a Grimm sidekick as well as a love interest, or say good-bye and head for the hills (or wherever would be safe, anywhere Nick is NOT, I reckon). But she deserves the chance to make that choice.

And most of all, Monroe, every moment he was on screen. The writers and the actor have made him a wonderfully engaging quirky, put-upon, and dangerously capable when he needs to be, friend to Nick.

Hank was marvelous in this ep too. I've come to really like and respect this character.

I still feel Nick's character is the least fleshed out of the main ones (though last night's ep left me feeling I knew him a little better. Because of the physical vulnerability, I think). Any thoughts on that? Or is it just me?

@Lori - The ogre violence did get pretty intense, compared to what we've seen thus far at any rate.

COMPLETELY agree with you about Juliette. I hope Nick gives her the chance to choose, though I suspect that a great deal of their relationship tension between now and the end of this season will be Nick trying to shield her from the truth.

I agree with you about Nick's character so far -- and the fact that having him forcibly sidelined told us more about him than seeing him in the field has! Interesting, very interesting -- I do think it is because he had no choice BUT to sit this case out -- and you could see that driving him up the wall.

I love this show. Sooo happy it's back. I thought it was interesting Nick doesn't want Hank to know that he and Eddie know each other aside from the fact that he was a suspect. Is that a cop thing or a Grimm thing?