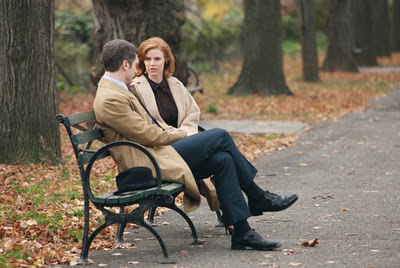 Well once again I find myself weeks and weeks behind in television reviews...oh well, it is what it is, hmm? :) As the year has progressed, I've found that Pan Am has not quite lived up to the promise of its first two or three episodes -- but once I came to terms with the fact that the show was DETERMINED to give me whiplash when it comes to all of the characters and their relationships, well I've still enjoyed it for the most part. :) "Secrets and Lies" marked Pan Am's return after its killer winter cliffhanger episode which saw Kate (Kelli Garner) taking firing on a spy to protect her British intelligence contact Anderson (David Harbour). I found it fascinating to see how the show dealt with the aftermath of the shooting -- Kate seemed to handle it remarkably well, all things considered, until Richard (Jeremy Davidson) informs her that if she has any hope of putting this episode behind her she'll have to pass a lie detector test. It turns out that Anderson lied about the incident, claiming responsibility for the shooting -- and in order for the investigation to be closed and for BOTH of them to move on with their lives, Kate will have to confirm his story. Leading up to the lie detector test, I thought Garner handled Kate's near-breakdown really rather well. Loved the push-and-pull between her and Anderson, and the way she ultimately embraced a spy's life since she's started to reveal something of an aptitude for it.
Meanwhile things have been going just swimmingly for Dean (Mike Vogel) and Colette's (Karine Vanasse) budding romance, but of course in the world of this show you're lucky if a relationship is solid for twenty minutes of screentime. :P Bridget (Annabelle Wallis), who BROKE DEAN'S HEART with her disappearing act, is back (thanks to Kate stopping that list of agent names from getting sold) and thinks she can just pick right back up where she left off with Dean. Craziness! Unfortunately, Colette is ridiculously nice and instead of making a case for her place in Dean's life she practically pushes him in Bridget's arms so the two can "work out their issues." Whatevs. This whole Dean/Colette thing is a bit of a mess, because if Colette is too nice to tell Bridget to take a flying leap (which she is), then Dean is too wishy-washy to know what (or WHO) he really wants. Dean, I really do like you, I think you are a nice person and you bear a striking resemblance to a KEN DOLL, but for goodness' sake learn how to control yourself! Just because an ex-girlfriend throws herself at you doesn't mean you *have* to sleep with her. YEESH! 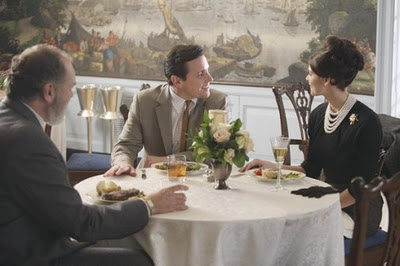 Maggie (Christina Ricci) is very, VERY conflicted about her continuing relationship with the senator (Chris Beetem) she hooked up with in the last episode. She positively HATES his politics, but OHMYGOSH HE'S SO HOT, right?! What's a girl to do? *rolls eyes* Unfortunately for our most impetuous stewardess, she put pen to paper and turned in a rather inflammatory article to her "friend-with-benefits" Mike the reporter (Colin Donnell) at the Village Voice newspaper. When the paper needs an extra column Mike spiffs up Maggie's article and runs with it -- and poor Maggie can't seem to bring herself to admit to her paramour that she's the source of the bad press. Maggie, Maggie, Maggie, the longer you try to keep this secret the worse it's gonna get when the truth comes out! (Can I just tell you, though, that I am really impressed with the level of secondary character continuity this show delivers -- sure the scripts have their hiccups, but bringing back Mike for multiple episodes really does help build the world of the show.)

Ted (Michael Mosley) has fallen head-over-heels for his former childhood nemesis Amanda (Ashley Greene) -- his only issue is that she's saving herself for marriage, and Ted, well he's just not that patient. :P The moment where he goes to Laura (Margot Robbie) for advice was actually really rather humorous, and unexpectedly thought-provoking. If Amanda saying she's saving herself for marriage gets Ted serious enough to want to go engagement ring shopping, what does that make Laura feel about her own admitted premarital tryst? Now I'm not suggesting this show is trying to be moral (its track record proves otherwise), I just thought the contrast in Laura's past dealings with Ted and his new relationship with Amanda, and how he views it, was...interesting. I also think it is interesting contrasting Dean vs. Ted -- in a weird way I've come to respect the less likely of the two (Ted, based on his introduction in the show) as the season has progressed. At least Ted can OWN that he's a mess, know what I mean?  Also...Robbie rather broke my heart with her unspoken heartbreak over seeing the possibility of a relationship with Ted slip through her fingers. Oh those crazy kids! :P

Posts on episodes 11 and 12 are forthcoming, so I've tried to keep my thoughts specific to the events in this episode alone. :) Thoughts on the episode?
Posted by Unknown at 4:05 PM

Okay, I've been thinking all along that Dean is the type of guy who should be handsome, but there's just something about him that's a little off (besides his *character*! Or lack of it. Good grief). And now it makes sense! He does look like a Ken doll. Creepy.

I think I'm one episode behind on it so far. I know I saw the one after this, but I don't think I've watched any since then yet. I'm a little too preoccupied with Downton Abbey to visit Hulu very much. :)

I disagree with you about Colette--I think she knows that Dean needs to play things out with Bridget before moving on (if he even decides to move on), and I kind of admired her for her decision to let him go. I did want her to fight for her man, and I freaking hate Bridget :P, but realistically Bridget and Dead were going to get married, you know? I don't think forcing the issue would have been fair to Dean, and I can only imagine what being trapped in an airplane with the three of them would be like, holy cow.

I've come to the conclusion that everyone on this show is a slut -- including the men. I cannot really root for any couple in particular because I know even if they do wind up together, none of them will be faithful to each other. Leopards can't change their spots, and an unfaithful man during your dating period will be an unfaithful man during your marriage. The show was cute, but has worn out its welcome in my house simply for being so immoral and politically correct. =(

@Kristin - Isn't it funny? He is such a Ken doll! LOL! And I can completely relate to your feelings about Downton. :)

@heidenkind - Excellent point. And you are so right about the work situation...SOMEONE needs to transfer ASAP (preferably Bridget, HA!).