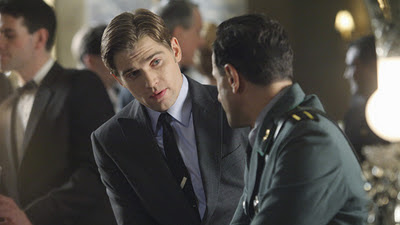 This may come as a shock, but I pretty much loved this episode of Pan Am (the drama, not necessarily the morals -- ha!). Definitely one of my favorites of this show's short run -- somehow everything just worked for me. The episode opens with Kate (Kelli Garner) practicing pick-pocketing skills under the watchful eye of Richard (Jeremy Davidson). Apparently that is how the CIA trained their freelance spies in the '60s -- hey, how about we practice picking pockets in Central Park? Great weather! Richard wants Kate to lift some microfilm from the pocket of a courier in Rome -- the Italians are granting the US access for the operation, and thanks to Richard, Kate and crew have an invitation to an exclusive party. Awesome moment #1 -- Kate and Richard being all flirty while she tries to lift his wallet. I LOVE THEIR SCENES!
Dean (Mike Vogel) is desperate to win back Colette (Karine Vanasse) but she isn't giving him the time of day -- and while he totally deserves the cold shoulder I actually felt rather bad for him in this episode...he wasn't all Ken doll perfect (well not quite). *wink* Colette drops the little bomb that she's put in a for a base transfer to ANOTHER CONTINENT (note to Dean: THAT is sending a message). So he's all stressed and on edge heading into this flight, which is only made worse by the arrival of a last-minute passenger who is handsome, charming, and oddly enough has NO luggage. (That sort of cracked me up -- times have certainly changed haven't they, in regards to airline security!)
The lone passenger, Omar (Piter Marek) is everything Dean wishes he was at that moment -- handsome, calm, cool, collected, and oh-so-very-charming -- so Dean decides he MUST be the passenger responsible for a smuggled cache of cigarettes (in Dean's defense, Omar's lack of luggage works against him). Despite his unorthodox entrance, Omar charms Colette (much to Dean's chagrin) and the sparks fly between the two of them. He talks Colette into showing him around Rome and she agrees (seriously who can blame her?), and this is where things got AWESOME. The whole relationship was wildly reminscent of Gregory Peck and Audrey Hepburn in Roman Holiday, only the royalty role is reversed when Dean is humiliated by the revelation that Omar is a prince who went AWOL on his family and responsibilities to "see the world." Before his departure Omar invites Colette to be his date to a White House dinner -- just marry him already, Colette. If anyone on this crazy show deserves a Roman Holiday-esque romance it's you. *wink* 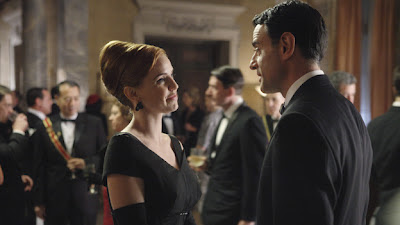 Turning our attention to the rest of the crew, Maggie (Christina Ricci) can't keep Amanda's (Ashley Greene) kiss from Ted (Michael Mosley). She tries to tell him that maybe, just maybe, all is not as it seems in his whirlwind romance it rather blows up in her face -- Ted is very much a man's man and just can't wrap his head around the idea that Amanda may be more interested in women than men. Apparently sensing Ted's reservations Amanda agrees to sleep with him, and it doesn't go well to say the least -- nothing is shown, there's just a whole lotta AWKWARD in the aftermath. At this point I was yelling at the TV for Ted to wake up already because he is in deep denial about Amanda's turnaround as regards him and her desire to marry.
Meanwhile Laura's (Margot Robbie) world is rocked when she discovers that the impulsive nude photographs she was so proud of just a few months prior were SOLD AND PUT ON DISPLAY (seriously who didn't see that coming? yeesh...). She's humiliated and panicked, going so far as to go to Ted's to ask for a loan -- where it is glaringly apparent to Amanda that the pair have feelings for each other (DUH). She ends up loaning Laura the cash to buy the prints, and later suggests to Ted that they have an open marriage so he can be be with Laura all he wants (to Ted's credit, at least by the end of this episode, his WHAT THE HELL face is pretty priceless). The photograph issue remains unresolved for Laura as on her return trip to the gallery she's recognized and praised for her "bravery" (some say brave, I say stupid) and learns that friggin' Andy Warhol wants to buy the pictures. This whole section of the episode is soap opera INSANITY, the best part being Ted's valiant efforts not to appear completely clueless. :P
Maggie's adventures in Rome take an interesting turn when George Broyles (Darren Pettie) approaches her with an offer he's sure she won't be able to refuse -- become a partner in his Pan Am smuggling operation or he'll reveal that she was the source behind the revelation of Dean's earlier affair with Ginny, the mistress/secretary of a Pan Am vice president. This is an interesting moment, because I've felt since the beginning of the show that Maggie was the least-developed of character of the four female leads. However, I was happy to see that she finally shows some positive character growth by owning her actions and refusing to cave to Broyles's blackmail threat.
This episode ends with the horrific event we've known was coming since Kennedy's Berlin wall speech -- his assassination. All of this week's drama -- Laura's photographs, Ted's shock about his fiancee, the breach between Colette and Dean -- pales in comparison to the news spreading through the country from Dallas regarding the president's condition. My mom's talked about what it was like to get the news, so it was interesting to see the total shock and disbelief play out in our characters' lives -- news traveled in a much slower manner, almost unrelatable by today's standards with the "instant gratification" of 24-hour news cycles. Overall a solid episode in what has been a bumpy ride this season.
Posted by Unknown at 1:54 PM

@Tasha - Ohmygosh you should try to find this one -- it was definitely one of the season's better efforts, a very solid ep!