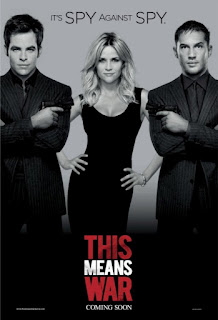 Yesterday Kaye and I went to see This Means War. The above poster pretty much sums up my initial reason for being interested in the film -- Tom Hardy and Chris Pine in suits? Yes please. The set up: Tuck (Hardy) and FDR (Pine) are two of the CIA's top operatives, as close as brothers -- best friends on and off the field, and when it comes to work a deadly team. As the film opens Tuck and FDR are on a covert assignment in Hong Kong, a simple "acquire the device" (don't you love how in these types of films non-specific "device" is enough to be threatening?) from a generic Nordic-looking bad guy with the nicely menacing name of Heinrich (Til Schweiger). :) Their mission becomes anything but covert as bullets fly and bodies drop from tall buildings, etc., including Heinrich's brother. Collins (Angela Bassett), Tuck and FDR's boss, makes the decision to sideline the pair and assign them desk duty until Heinrich is stopped, since now he has vengeance on his mind (as opposed to just terrorism I guess). 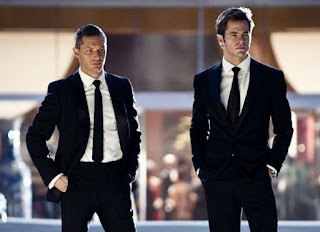 Away from the life-and-death intensity of field operations, Tuck and FDR are bored (Pine and Hardy are hilarious in their first desk duty scene), which gives them time to focus on their personal lives. Tuck, having been married before, longs for a genuine, workable romantic relationship. The covert nature of his job and the secrecy that it required led to his divorce, and forces him to be something less than the father and hero he'd like to be in the eyes of his young son (John Paul Ruttan). FDR is perfectly happy to hang out with his BFF when he's not hooking up with random women, but ultimately he supports Tuck's decision to enter the dating field. Tuck's first online date is with Lauren (Reese Witherspoon), a career savvy but lovelorn professional desperate to get out of the rut her life's become. Sparks fly with Tuck -- but sparks fly equally hot when, following their first date, Lauren wanders into a HUMUNGOUS DVD RENTAL STORE (seriously, what is this, 1995? who can go to rental stores like that anymore, aren't they all closed??) where she meets FDR. Both men want her -- and when they discover they're dating the same woman, well, it's war. *wink* 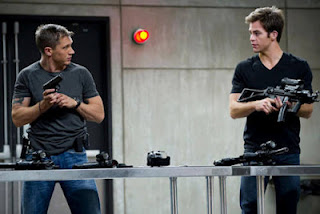 Now for some people I suspect whether or not they like this movie will depend on whether or not you can set aside the rather flippant attitude of the leads towards relationships/sex (particularly Lauren and FDR, though they both come through in the end). This is not a necessarily morally sound film in that respect, but it does have some interesting and solid things to say about friendship and long-term commitment and what it takes to really make a relationship work. I love spy-centric action films, and on that score This Means War delivers in spades. With direction by McG, it's small wonder -- he executive produced two of my television favorites, the short-lived Human Target and the recently concluded Chuck. This movie is like those two television shows on speed -- more spectacle, bigger explosions, and like Chuck unexpected moments of heart when it comes to relationships.

Tuck and FDR's friendship is the core of the film and Pine and Hardy play off each other too perfection on-screen. Hardy's career is on fire -- I was telling Kaye back when I first took notice of him as Heathcliff in Wuthering Heights (which I loved), I wouldn't have necessarily pegged him for big-screen stardom. But ever since his appearance in Inception his Hollywood career seems to have exploded -- last year there was Warrior and Tinker Tailor Soldier Spy, and this summer he follows up This Means War with a sure-to-be-stellar turn as Bane in The Dark Knight Rises (can. not. WAIT.). Out of the pair of agents, Hardy's character is the one I immediately liked because he was so nice, came across as so solid and dependable and vulnerable, and the accent didn't hurt either. *wink* Absolutely delightful. :) 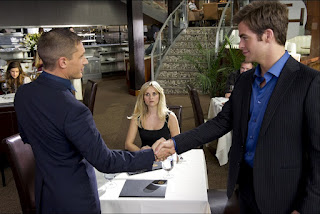 Pine on the other hand -- oh my word the man was hilarious. I haven't seen him in anything since his turn was Kirk in the Star Trek re-boot, and I have to say FDR and Kirk are remarkably similar. In fact, FDR is everything Kirk was -- brash, cocky, self-confident, full of himself -- multiplied by a factor of ten. FDR is the player, unlike Tuck more than happy in his single status and the freedom that gives him to play the field. I loved how FDR, in the moments when he's focused on Lauren (as opposed to one-upping Tuck) that Pine lets viewers see his character soften, become vulnerable, realize he wants a relationship instead of yet another transitory fling. (I AM SUCH A SAP! But it's his EYES! Chris Pine's brilliant blue eyes melt me into an incoherent, babbling puddle of goo!!!) You know FDR is changing when we see him watching the James Cameron Titanic...by himself (arguable that he's changed or in need of an intervention, depending on your view of said film).

The "bromance" between Tuck and FDR is without a doubt the movie's greatest strength. But my second favorite aspect of the storyline has to be how the pair goes about trying to sabotage each other -- folding their desire to spy on the other's interactions with Lauren into their current directive to bring down Heinrich (which of course leads Heinrich to the leverage he needs to get at the men responsible for his brother's death). Everyone in their orbit at the agency becomes either "Team Tuck" or "Team FDR," and their proprietary attitude towards their useless intel is for the most part quite funny.

I haven't said much about Witherspoon -- I generally like her and she's her usual appealing romantic comedy self as Lauren. She can do vulnerable and broadly comedic equally well, which works to her advantage here. It is interesting how this movie inverts gender norms in film, i.e. Lauren is the one in the position of "power," if you will, since she has two equally appealing men vying for her attention. This was perhaps best illustrated in the post-sleeping together scene between Lauren and FDR -- she's the one awkwardly running out of the bedroom the next morning, leaving FDR to puzzle over her sudden exit. :P 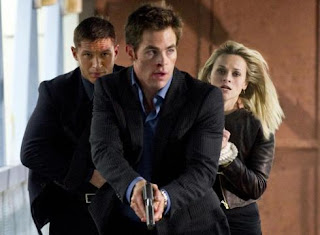 As far as the rest of the cast goes, Chelsea Handler is completely annoying as Lauren's married best friend Trish, and Giver of Generally Horrible and Immoral Advice. I'm just not a fan. But she does bear an uncanny resemblance to Reese, so much so I initially thought they were supposed to be playing sisters. She does have one gem of a moment, though -- when she counsels Lauren to quit focusing on who is the better man between Tuck and FDR, but to instead decide who makes her the better woman, the best version of herself. When it comes to the man Lauren chooses, that nugget of wisdom certainly holds true for how she impacts him. :) It was also fabulous to see Rosemary Harris as FDR's grandmother -- I just love her, she adds a touch of class to any project.

This Means War is a hilarious twist on the spy/caper genre, full of laugh-out-loud moments and non-stop action. If you have any reservations about the film, take the rating seriously as some of the humor is on the crasser side (a lot of that due to Handler's character now that I stop and think about it). That aside, if you just want to be entertained by Pine and Hardy in sharp suits, well they deliver in spades. *wink* I'd love to see more films of this type from both men. While I'm quite partial to Pine (the eyes! the eyes!), Hardy was a revelation here as I would never have suspected him to have such an affinity for comedy. A surprisingly enjoyable, funny, fresh take on a genre I adore.
Posted by Unknown at 7:15 PM

saw this last night. Team Tom Hardy all the way! wasn't my favorite movie. we saw a double feature with Safe House and thought it was interesting how both movies dealt with the CIA and how people in the CIA tend to orphans. everyone's eyes were SO BLUE. i loved the scene when Chris imitates the British accent. btw what is wrong with being british??? i mean that alone would make me choose tom over chris! also he look SO SMALL in this movie! he must have done this months before Warrior and TDKR bc he is so bulked up in those movies. I wish Reese's character had been a stronger one. One more small note...Tuck tells FDR's g-mom that he's already given her a grandson. Was he meaning like a honorary grandson bc him and FDR are so close?

I have to say....Chris Pine is so stinkin' cute =D and I don't hate Reese Witherspoon either....however, Chelsea Handler makes this a tough sell for me.

@Deborah - You are NOT kidding. Tom was adorable. Thanks for pointing out the grandson thing, that did confuse me. I have to think Tuck is meant to be an honorary grandson because he and FDR are like brothers...that's the only thing that makes sense!

@Ella - Isn't he though? LOVE IT! :) Thankfully Chelsea Handler isn't a constant presence...and several of her scenes will be easy to skip when the DVD releases. :)

Girl I LOVE CHUCK!!! Love, love, LOVE IT!!! And miss it like crazy. Still torn up over the series finale!

Hallelujah.....perhaps I will skip Chelsea Handler then ;-)

Yeah, that season finale. I have a love/hate relationship with it!!!

Yay! This review is back - couldn't find it to comment (it popped up on my dashboard, then wasn't here). ;D

Cannot wait to see this one - LOVE Reese as an actress. Plus it just looks like a lot of fun but, as usual, I'll likely see it on DVD. =)

@Rissi - LOL! Here's the thing -- I accidentally hit publish before I had even finished the post -- that's why it disappeared. :) Hope you enjoy this one!

I've published posts that I didn't want to appear yet - it just happens. ;D

ok good thing we agree about the honorary grandson. because my other thought throughout the movie was that tuck's exwife was FDR's sister but then that revelation at the end threw out that theory completely.

also loved your comment about the video store. someone has not been keeping up with the times...

@Deborah - I am so glad I'm not the only one who was bugged by the video store thing, that was just bizarre!