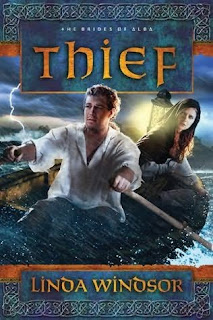 Sixth-century Scotland comes alive in a tale that sings with beauty, danger, intrigue, and redemption.

Caden O'Byrne is a disgraced mercenary with a death wish and one slim chance for redemption -- to find the long-lost daughter of the woman who healed his battle wounds. But Sorcha, kidnapped long ago and raised by Saxons, wants no part of his mission. A lovely minstrel with a heart for the helpless and a habit of lifting purses to finance her good works, she has her own problems -- a debt she can't pay and betrothal to a man she cannot love. Then a treacherous murder sends Caden and Sorcha fleeing for their lives. Will they find a second chance together?

After a failed coup -- orchestrated by his witchcraft-practicing wife -- Caden O'Bryne is banished from his homeland and family. Alone and disgraced, he survives as a mercenary soldier of fortune, longing for the day when death will grant him a hoped-for oblivion from the sins of past. Serving under Mordred, King Arthur's nephew, Caden wins royal favor when he saves the high king from death by a Saxon's blade. Brought back from the brink of death and demonic visions by a desperate call for mercy on the name of Christ, Caden resolves to make the most of his undeserved reprieve. Hoping to repay the kindness and hospitality of the woman who nursed him back from the brink of death, Caden travels deep into Saxon-held territory in search of her lost daughter Sorcha, kidnapped as a child. Caden finds Sorcha faster than he'd dared to hope, but the flame-haired scop (entertainer) is loathe to leave the only life she's ever known, saddled with commitments and a convenient, though undesired, betrothal. Caden and Sorcha are forced to join forces in order to survive when common enemies frame the pair for murder, sending them fleeing for their lives. With only a fledgling faith between them and a desperate hope for redemption, Caden and Sorcha soon realize that accepting the gift of grace, freely given, may be their greatest challenge in their fight for a future free from fear and regret.

Healer, Windsor's first novel in The Brides of Alba series, was one of my favorite reads of 2010 and with Thief she's surpassed herself. Simply put, I love everything about this book! Here Windsor continues the thesis she set forth in Healer -- shining a light into the Dark Ages of history and revealing the vibrant faith of the early Christian church in sixth-century Scotland under the rule of Arthur of Dalraida, the only historically documented Arthur of legend. As is per the norm in Windsor's historical fiction of this ilk, Thief is saturated with rich historical detail and research, lending everything from the setting, clothing, customs, and speech the ring of authenticity resulting in a wholly absorbing reading experience. Where Healer focused on the tension between the Christian church and still widely prevalent pagan belief systems, Thief delves deeper into the Church's attempts at peaceweaving or arranged marriages between Christian princesses and pagan princes, fostering peace between warring factions and planting churches in previously unreachable territory. Through Eavlyn, the princess in question in this case, Windsor explores a secondary aspect of her thesis -- reclaiming the history of the study of the stars within the context of Christian faith.

In conjunction with this rich dose of history, Windsor once again spins an unforgettable love story against the backdrop of a time of danger and turbulent social and political change. Through Caden's association with Mordred, and the latter's interest in Scotland's historical pagan religions vs. dictates from a far-off Roman Church, Windsor hints at the discord of Arthurian legend. Like her best couples, Caden and Sorcha are passionate, wounded souls in desperate need of redemption -- what sets this pair apart are the sparks that fly whenever they meet. Caden and Sorcha are two of Windsor's most passionate creations, their love all the more powerful thanks to a simmering realization that it is a gift from the God who saw them through their darkest hours. Windsor is a master at penning a swoon-worthy love story, but what sets Thief apart is the completely organic, authentic manner in which she incorporates faith, proving the two are most definitely not mutually exclusive -- indeed it is a passionate illustration that faith is the bedrock that enhances relationships, romantic or otherwise.

Thief is a rollicking, non-stop adventure, a romance stitched together with a thread of faith that speaks to the author's passionate confidence in the transformative power of a life whole-heartedly sold-out on the promises of a God who never fails to answer when we call. I cannot wait for the next volume in this series -- Rebel -- coming this summer!

And just for fun, this is how I pictured Caden while reading Thief -- Chris Hemsworth (film still from the upcoming release Snow White and the Huntsman). Small wonder I loved this book so much, hmm? *wink* 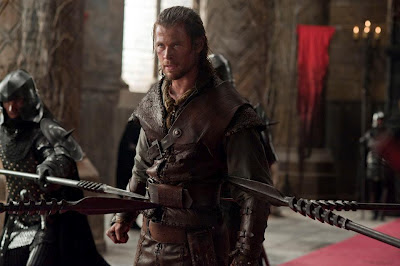 Small wonder, indeed! You just made me want to read this book. ;)

Ruth, you even made ME want to read it and I wrote it! It delights me no end when someone "gets" all the layers of my stories, from plot and romance to the history and setting. THANK YOU for such a wonderful review!

Not sure what I did, but it signed me as unknown. I am the "unknown" and grateful author of THIEf.
Linda Windsor

@Linda - Thank you so much for stopping by! I cannot tell you how much I adored this book -- I'm eagerly anticipating Rebel's release!

I've not read this series. It just never seemed to "jump out" at me... but I do love Linda's novels, so maybe...

@Rissi - Oh I ADORE this series. Have you read Windsor's previous historicals (Maire, Riona, Dierdre)? They are excellent as well.

Actually, no. I picked up Marie at Wal*Mart (or somewhere) once for like, six dollars because I love her romantic-comedy fiction (my mom LOVES Along Came Jones) but I've yet to read it.

Perhaps this is what I needed to remind me that Linda also writes historical fiction. =)

@Rissi - I'm actually a bigger fan of her historicals. :) Hope you decide to give her other genre a try... :)