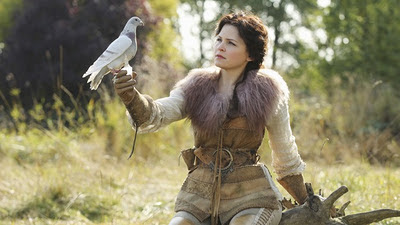 So I've been a BAD Once Upon a Time blogger, haven't I? Never fear I do plan on catching up (eventually...). When we last saw the residents of Storybrooke, Henry and Ava (a.k.a. Hansel and Gretel) had been reunited with their father, and a mysterious stranger (Eion Bailey) rode into town on a motorcycle (oh the scandal!). Henry (Jared Gilmore) has a brief encounter with the nameless one (sorry I can't help being dramatic) outside his house, properly freaking Regina (Lana Parrilla) out, much to my amusement. The ever-savvy Henry is clearly suspicious and the Stranger isn't exactly forthcoming with details -- clearly he's there with a purpose, but what exactly remains to be seen. Before riding off on his bike the Stranger warns Henry that "a storm's coming" -- in more ways than one, hmm? Laying on the symbolism a little thick there, writers...
Meanwhile Mary Margaret (Ginnifer Goodwin) has made zero progress in regards to Emma's (Jennifer Morrison) previous advice about forgetting David (Josh Dallas) since he chose to stay with his "wife" (the jury's still out as to whether or not this marriage is legit). It turns out that she basically has David's schedule memorized, which includes daily visits to Granny's Diner at promptly 7:15 every morning. She just wants to look at his gorgeous face, dangit! (Girl, I know eactly how you feel.) And they are so adorable together it KILLS me. If only there was a magic cure for the heartbreak of unrequited love...
We return to Fairy Tale Land just in time for Charming's wedding to Midas's daughter (Anastasia Griffith). Snow White's been living the life of an outlaw in the woods, occasionally brought supplies and news by Red (Meghan Ory). The most criticial thing to note about this exchange is that Red is about five hundred times classier than Ruby, her Storybrooke counterpart. Seriously her costume and hair are amazing! Disappointed, though, that the writers didn't use this opportunity to provide some depth to the Ruby/Red character -- she's still by far the most under-utilized cast regular. So apparently Snow White and Charming have both been moping around since their first meeting (awww). Snow approaches Rumplestiltskin (Robert Carlyle) seeking a cure for her broken heart, and he provides her with a potion that he promises will do the trick. Meanwhile the king is concerned that Charming's heart isn't in his upcoming marriage (blackmail can do that), and against his fake father's wishes Charming sends a note begging Snow to come via BIRD.
Seriously, what the heck is it with Snow White and BIRDS?! If all of this stems from the animated film, Disney did the girl no favors! The lost bird twist in the Storybrooke timeline didn't really work for me either -- Mary Margaret risking a severe storm in order to return a friggin' bird to the wild? I mean really? (Clearly I am not a bird person...) 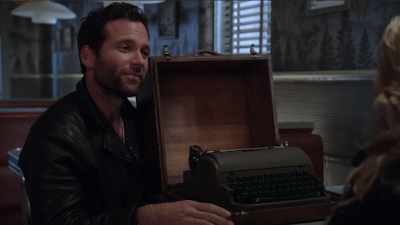 Back in Storybrooke, Regina asks Emma for a favor (WEIRD) -- she wants her to investigate the Stranger. Emma, I'm afraid, isn't exactly subtle, but whatever -- there's chemistry between the two of them because Eion is freaking ADORABLE. And I love how aggravated she gets at his unflappability. After agreeing to have drinks with him, the Stranger reveals that his mysterious wooden box contains an old-fashioned typewriter. Personally I'm glad the writers didn't drag that mystery out. Here's my theory -- perhaps the Stranger is the author of Henry's storybook! Maybe he's an original Grimm brother? LOL! Thoughts?
After receiving the Prince's birdgram in Fairy Tale Land, Snow sneaks into the castle to meet him where she is promptly arrested (chick really thinks things through). Turns out it's in prison that she met one of the dwarves of legend -- Grumpy (Lee Arenberg), a surprisingly lovelorn, emotionally sensitive individual considering his moniker. (LOVED the fact that he was whistling the "Working Song," that was a nice touch!) Anyways, to make a long story short, Grumpy and Snow bond in prison (her in with the dwarf gang!), the escape and are caught again, and this time the king steps in, blackmailing Snow into telling Charming she doesn't care for him or HE'LL KILL HIM (seriously this king is a piece of WORK). The best thing about this latest wrench in Snow & the Prince's road to happiness is the Josh Dallas angst factor. This guy just kills me, he's so blatantly in love with Snow he can't hide it at all. Their chemistry is absolute perfection. When he picks her up and twirls her around (before she stomps on his heart and all), the joy on his face just blew me away. *swoon*
Back in Storybrooke, David has to rescue Mary from falling off a cliff during her whole bird-rescuing venture (yes, really). The pair seek shelter from the storm in an abandoned cabin in the woods where Mary Margaret reveals she still harbors feelings for David -- feelings he clearly reciprocates and almost acts on until Mary drops the little bomb that his wife, the woman he chose, is buying pregnancy tests at the grocery store. David you beautiful, noble, IDIOT you can't have BOTH. *sigh* I really want you to choose because I don't want you to be that guy, the guy who cheats (nevermind the curse). Mary Margaret and David resolve to forget each other -- yeah, we know that's gonna last. 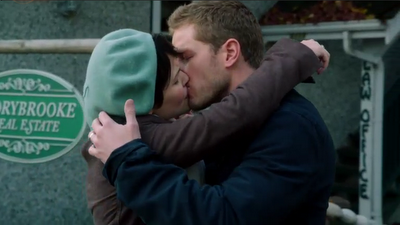 I found the juxtaposition of Fairy Tale and Storybrooke scenes ending this episode really rather fascinating. Snow's taken refuge with her new dwarf friends, heartbroken over what she assumes is the finality of Charming's loss. Little does she know that Charming has thrown off the wedding and is on the hunt for his true love (Josh Dallas on a horse = WIN). Snow (oh ye of little faith) drinks Rumple's potion, wiping out her memories and feelings for the Prince (STUPID GIRL). Now when the season opened, Snow and the Prince were married, so we know they got together in Fairy Tale Land -- I just think it is interesting that the road to happiness in their previous lives is proving every bit as rocky as their cursed existence in Storybrooke.

Mary Margaret and David's resolution to avoid each other lasts all of five minutes (basically) when they accidentally run into each other and end up sharing a passionate kiss. I'm not even gonna try to hide it, I loved that kiss (in full view of Regina, no less!). Just thinking out loud here...I'm starting to wonder if Mary Margaret and David's biggest obstacle to their happy ending is their own innate sense of honor, skewed by lives their true inner selves don't recognize because of the curse? David knows he's not supposed to be with Kathryn, but because his is, he's reluctant to make a clean break, but he wants to be with Mary Margaret...and so the vicious cycle continues. I'm probably over-thinking things... (heck that's why I blog, hmm?). *wink* I'd love to hear your thoughts on this episode!﻿
Posted by Unknown at 4:36 PM

You are not alone--I love looking at Josh Dallas's face and that kiss was fantastic!!!!

And I am of the opinion that the mysterious stranger is a Grimm brother. Right now, I don't have another theory that makes any sense. =P

@Ella - Glad to have some company in that regard. I do love Josh Dallas. :)

The Stranger HAS to be the author of Henry's book, he just HAS to be! If he's actually a Grimm...that would be pretty wild!!!

Ha! I haven't even gotten around to watching this episode yet, that's how bad a blogger I am. ;)

@Tasha - Glad I'm not alone. :) Ooohh, this means you haven't watched the Beauty & the Beast episode yet. You're in for a treat!