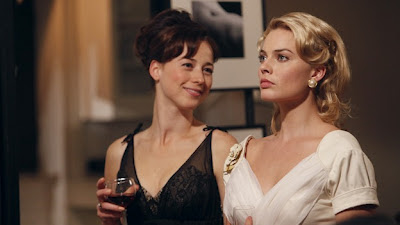 I am SO CONFUSED. Why a ratings-challenged show like Pan Am would opt to air as episode 13 a show whose events occur between episodes six and seven is completely beyond my comprehension. Why, now that Colette and Dean have taken steps toward an on again/off again relationship, when Laura's faced the humiliation of having her nude photographs on public display, WHY when there's been so much progression did the show decide to jump back in time without so much as an on-screen notation or introductory scene of explanation is beyond me. If anyone knows whether or not this episode was bumped for a reason please chime in with a comment, I'd love to know the reasoning behind this!
Anyways -- the Pan Am crew is headed to Rome, and Dean (Mike Vogel) cannot wait to get out of the country. He's tried repeatedly to break up with Ginny (Erin Cummings), the mistress of Pan Am vice president Everett Henson (Scott Cohen), but she's just not taking no for an answer. This chick is a whole lotta crazy -- but clearly Dean has issues thinking with his BRAIN. *sigh* Clearly the episode in the street where she loses it and throws full milk bottles at his head didn't clue him into the fact that she was not going to let him go without a fight, because he's COMPLETELY SURPRISED when she's followed him to Rome (clearly Dean thinks he's above being stalked). Dean finally seems to get a clue when Ginny smashes her head through a WINDOW (that was epic for this show, trust me!). Throughout the course of the episode its revealed that Ginny and Henson fought over Maggie's revelation that she was cheating on him, a desperate attempt on her part to keep her coveted job at the expense of her friendships. When Henson, for some reason STILL in "love" with the crazy arrives in Rome, he and Dean reach an understanding of sorts -- Dean can move on and keep his job as long as he keeps the secret of Henson's affair from becoming public knowledge. Not your best moment, Dean...and given the Colette/Bridget mess of the last few episodes I can't say I think you've learned all that much. *sigh* :P
Speaking of Colette (Karine Vanasse), she's tasked with chaperoning Charlie (Lance Chantiles-Wertz), a young boy shuttling between wealthy divorced parents. Colette's interactions with Charlie are really pretty charming, and she handles his adoration with mostly admirable aplomb and sensitivity. Charlie's a bit fresh and forward clearly because he's desperately lonely, and I think that's a quality Colette recognizes and relates to given her history of losing her parents to World War II. I've also got to say I loved the moment at the end of the episode where she calls Maggie (Christina Ricci) on her crap, confronting her with the knowledge that she's well aware of the lengths Maggie went to in order to keep her job -- something that clearly rattles Maggie, and given her actions in subsequent episodes (i.e. seven on) I think she's shown a degree or two of greater appreciation for her friends and coworkers. 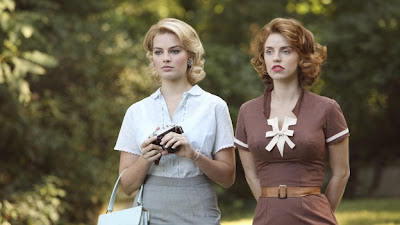 Laura (Margot Robbie) is rather obsessed with losing her virtue to an annoying degree in this episode. She's sick to death of being the baby sister, the one who's always getting taken care of, who can't be trusted to make her own decisions, etc. When she attends a photography exhibit by the Life photographer who made her famous by featuring her in the magazine, she's alternately scandalized and intrigued by his edgy nude portraits. He mistakes her fascination for interest in him, she spends most of the trip to Rome second-guessing herself, ultimately deciding to pose for a set of private portraits (all in the interest of self-expression *sigh*). The best thing to come out of Laura's angst in this episode is that she shares a nice sisterly moment with Kate. You don't have to agree with their morals, but I like the two of them as sisters -- at they're best they are there for each other, and I appreciate that.

The best part of this oddly-inserted episode is Kate's (Kelli Garner) storyline. Since we've jumped back in time we get to revisit her relationship with Niko (Goran Visnjic) at the height of their happiness (any excuse for a Visnjic guest-spot is fine by me). Kate's perfectly happy to enjoy being in love with Niko, and if she can manage to turn him into a CIA asset so much the better. But the latter is more of a vague hope than a concrete possibility -- but all of that changes when Kate's approached in Rome and ordered to stay away from Niko. Understandably rattled by the experience, Kate's concerned her spy cover has been blown. Richard (Jeremy Davidson) reassures her on that front, but pressures her to use this scare to their advantage, hoping Niko's feelings for Kate will force a pivot into their camp. It's interesting, to me, that Kate objects to this but follows through anyway -- she is more serious about the spying gig than I think even she realizes at this point.

I really think if this episode had aired as episode seven as an additional chapter in earlier events this season, the overall season this year would've ended up stronger. Disappointing that this episode was shoe-horned in by all appearances at the last minute -- but what's done is done. (Speaking of what's done is done, this episode features an APPALLING lack of Ted/Michael Mosley. Just sayin'!) Season finale post coming soon!
Posted by Unknown at 5:31 PM

HOW WEIRD. Did they forget they have that episode or something? :P Hopefully the finale will get back to the timeline!

@Tasha - Seriously it makes NO SENSE AT ALL. I think I would've liked the episode more if it had aired in its PROPER PLACE! Good grief... :P