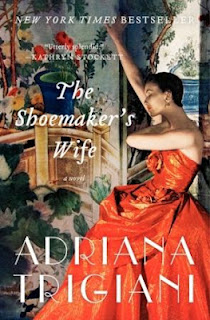 The fateful first meeting of Enza and Ciro takes place amid the haunting majesty of the Italian Alps at the turn of the last century. Still teenagers, they are separated when Ciro is banished from his village and sent to hide in New York's Little Italy, apprenticed to a shoemaker, leaving a bereft Enza behind. But when her own family faces disaster, she, too, is forced to emigrate to America. Though destiny will reunite the star-crossed lovers, it will, just as abruptly, separate them once again -- sending Ciro off to serve in World War I, while Enza is drawn into the glamorous world of the opera...and into the life of the international singing sensation Enrico Caruso. Still, Enza and Ciro have been touched by fate -- and, ultimately, the power of their love will change their lives forever.

A riveting historical epic of love and family, war and loss, risk and destiny, inspired by the author's own family history, The Shoemaker's Wife is the novel Adriana Trigiani was born to write.

At the turn of the century, in a small village high in the Italian Alps, ten-year-old Ciro Lazzari and his older brother Eduardo are left by their mother at the local convent following their father's death in America, who promises to return for them the following summer. When their mother fails to return, the brothers reluctantly embrace their status as essentially orphans, given over to a most unconventional upbringing by a group of nuns who adopt them as their own. While Eduardo embraces the culture of the Catholic Church, Ciro is far too carefree and in love with life to embrace a life faith. A chance meeting with Enza Ravanelli at her sister's funeral, a beautiful seamstress-in-training from a neighboring village, awakens both teenagers the possibility of love and an unexpected, soul-deep connection. But when, through no fault of his own, Ciro runs afoul of the local priest, he is uprooted from his beloved mountain home and sent to America at the age of sixteen to seek his fortune as a shoemaker's apprentice. When tragedy threatens the security of Enza's family, she seeks her fortune in America as well, carrying with her the memory of the boy who brought the light of hope to her darkest hour. Set adrift in the bustle of New York City, facing the challenges of language and working conditions, sustained by the immigrant's universal dream of a better life, can Enza and Ciro ever hope to find their way back to each other, and realize the fledgling promise of love's possibility born in their faraway homeland?

The Shoemaker's Wife marks my first time to read an Adriana Trigiani novel, and it most certainly will not be my last. This novel is epic in every sense of the word, spanning four decades and two world wars, chronicling the immigrant experience in America that defined so much of this country in the early twentieth century. This is a love letter to the hardworking men and women who risked everything on the hope of a better life in America, the chance to script their own version of the American dream of opportunity and prosperity. Inspired by her own grandparents' love story -- born in nearby Italian villages, never meeting until they immigrated to America -- Trigiani's novel is not only a gorgeous tribute to her own family's storied, rich history, but a love story to the immigrant experience as a whole, to the men and women whose sacrifices and labor, whose hopes and fears have been woven into the rich fabric of America since the nation's birth. While Ciro and Enza's stories are uniquely Italian, enriched with details from Trigiani's own family history -- the beauty of an ancestral home in the Italian Alps, the mouth-watering cuisine (gnocci and homemade mozzarella, oh my!), and the inescapable influence of Rome and the Catholic Church -- I couldn't help but reflect on my own family's Danish and Czech history, and how their experiences, much of them lost to the ravages of time, could possibly reflect and mirror the sacrifice, heartbreak, and hope Trigiani sketches throughout the pages of The Shoemaker's Wife.

I loved Trigiani's emphasis on familial bonds, the ones we're born with, as Enza's sacrifices for her family illustrate, and the ones we make ourselves, as Ciro, who is left bereft of parental guidance as a child, comes to appreciate. I particularly enjoyed the passages exploring Enza's experiences in New York, from her arrival where she worked at a clothing factory and toiled as little more than a servant for room and board, to the lifelong friendship she forms with the Irish Laura and their quest to become noted seamstresses, leading them to the Met and the unforgettable tenure of the Great Caruso. This is a richly textured novel, immersing the reader in the sights, sounds, and tastes of Ciro and Enza's lives. If I have one complaint, it's that this novel covers *too* much ground -- there's easily enough material here for two volumes, and so in an attempt to compressCiro and Enza's lives into one book the narrative is occasionally slowed by summary, narrative-heavy passages versus continuous action and plot momentum.

That stylistic note aside, I found myself thoroughly engrossed by this novel, and unexpectedly, deeply emotionally involved in Ciro and Enza's story. The charm of these characters lies in their homespun relatability -- The Shoemaker's Wife is a powerful exploration of themeaning and lasting impact of faith, family, and love. This is a story of lives well-lived -- yes, there's heartbreak and disappointments to be dealt with, but as Ciro reflects "so much of life was about not holding on, but letting go and in so doing, the beauty of the past and the happiness...then came full circle like a band of gold." This novel, a beautiful, heartfelt tribute to Trigiani's family, is a testament to the love and sacrifice of one's ancestors and the delicate ties of family and friendship that stitch together the fabric of a life fully lived.

Thanks to TLC Book Tours for the review opportunity!
Posted by Unknown at 11:08 AM

This sounds interesting. (That cover is gorgeous, too!)

I just started reading this myself and I'm quite enjoying it so far!

You've confirmed for me that I need to recommend this to my book club!

Also, I've noticed that almost all of the people who read one Trigiani book swear that they'll read more. I think that's quite telling to Trigiani's storytelling ability.

@heathertlc - I'm so happy to hear you're enjoying this one!

@trish - I would say ABSOLUTELY to that recommendation! I'm so happy I finally sampled Trigiani's work...this certainly won't be the last time I do so!