Review: A Brief History of Montmaray by Michelle Cooper 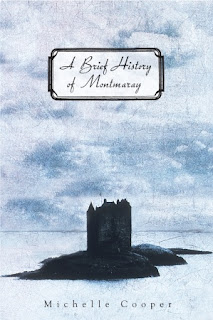 “There’s a fine line between gossip and history, when one is talking about kings.”

Sophie Fitzosborne lives in a crumbling castle in the tiny island kingdom of Montmaray with her eccentric and impoverished royal family. When she receives a journal for her sixteenth birthday, Sophie decides to chronicle day-to-day life on the island. But this is 1936, and the news that trickles in from the mainland reveals a world on the brink of war. The politics of Europe seem far away from their remote island—until two German officers land a boat on Montmaray. And then suddenly politics become very personal indeed.

A Brief History of Montmaray is a heart-stopping tale of loyalty, love, and loss, and of fighting to hold on to home when the world is exploding all around you.

On a small island in the Bay of Biscay, between France and Spain, lies the Kingdom of Montmaray, home of Sophia FitzOsborne, her tomboy sister Henry, and older cousin Veronica. They, along with Veronica's mad father the king and Sophia's brother Toby, are the last members of a once-illustrious and colorful royal family  dating back to the 11th century. But despite their titles and and wealth of familial history, the FitzOsbornes are nearly bankrupt, clinging to the crumbling family home with the aid of only a handful of loyal subjects. In many respects they are an isolated time capsule, a proud relic of happier and more plentiful times. In the fall of 1936 Sophia receives a journal for her sixteenth birthday and resolves to document her life -- the hopes, dreams, and everyday occurrences that make up her day to day life. She has no ambition of crafting an authoritative family history of the type Veronica works endlessly to compile -- but Sophia's scribblings are poised to become a critical record of a world on the brink of implosion. Montmaray may be small, but world events are destined to intrude on its shores, realigning Sophia's priorities and changing the course of her life forever. With the Spanish Civil War on one side and the heavy march of German Fascism on the other, Sophia is set to become the unlikely chronicler of a world on the cusp of war.

Sophia is an utterly beguiling narrator, her chronicle of life in her crumbling family home full of wry humor and razor-sharp, disarmingly honest observations. The first half of her journal has an almost fairy tale-like quality to it -- the closest literary equivalent that comes to mind is E. Nesbit's Five Children and It. Similar to Nesbit's classic, there's a quality almost akin to magical realism saturating the FitzOsbornes' lives -- two teenage girls, raising a ten-year-old, eking out a living on their wave-battered island because of the precedent of their royal lineage. But Sophia isn't content with tradition and dreams of life off Montmaray, of experiencing the "season" in London and falling in love. But as world events begin to intrude on the simple rhythms of their lives, Sophia begins to see herself as a chronicler of something more, her writing infused with fresh purpose as she records conflict first landing on Montmaray's shores.

Cooper's world-building is superb -- for a fictional kingdom and family, she's given the FitzOsbornes a gloriously realized, thorough history. Coupled with her deft characterizations and sure plotting, readers may find themselves forgetting that Sophia's journal is a work of fiction rather than autobiography. *wink* Cooper pairs her rich, descriptive world-building with a wealth of real-life history that sets this novel apart. A Brief History of Montmaray is an unexpectedly rich, meaty historical -- from the fictional FitzOsborne family history that bore witness to the Battle of Hastings, Elizabeth I and the Spanish Armada, and the horrors of trench warfare in the Great War, to the inflammatory political ideals alternately capturing and horrifying the imaginations of the world in the 1930s. Similarly to the recent re-boot of Upstairs Downstairs, through the eyes of Sophia and her family Cooper allows readers a window into the past as Toby meets Ambassador von Ribbentrop, Veronica debates fascism and socialism with the housekeeper's son, Simon, and the FitzOsbornes are shocked when Edward VIII abdicated to marry the twice-divorced Wallis Simpson.

Sophia's first journal is a lovely, absorbing read that deftly navigates the pivot from coming-of-age novel to high suspense with uncanny aplomb. This is a rare treat for readers of all persuasions, but an absolute gift for those passionate about this interwar time period and its affect on those living in such tumultuous times. A Brief History of Montmaray is an utterly captivating reading experience, a unique and memorable, thought-provoking blend of fact and fiction that entertains even as it inspires further reading and research. A marvelous introduction to Sophia and her world!
Posted by Unknown at 5:22 PM

This sounds fascinating! I've not heard of this, but I think I'll keep an eye out for it. Magic and history are two things I can't resist!

Sounds interesting! I've had it on my to-read list for a while but haven't come across a copy of it yet. :)

@Heather - I should classify -- there isn't actual magic per se in this story, it just has a magical...atmosphere, is maybe the right word. I had the hardest time coming up with a proper description for this novel -- it defies easy categorization IMO! But oh, it was so good!

@Kristin - I hope you can find a copy, I think you'd enjoy it!