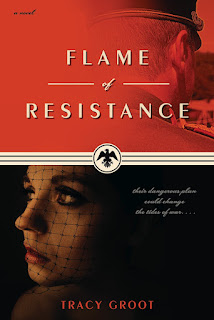 On the brink of D-Day in Normandy, France...

Nazi occupation has stolen much from Brigitte Durand. Family. Freedom. Hope for a future. Forced to turn her home into a Germans-only brothel to survive, Brigitte clings to patriotism by sneaking food to the French Resistance and the downed airmen they're hiding nearby.

When American fighter pilot Thom Jaeger is shot down and picked up by the Resistance, he becomes the linchpin in their plan to leverage Brigitte's sympathy. By posing as a German officer, Tom can smuggle out critical intel she acquires from other soldiers about the nearby bridges, whose capture and defense will be crucial to Allied forces.

D-Day looms, and everyone knows invasion is imminent. But so is treachery. When loyalties are betrayed, the life of one American pilot jeopardizes everything. He becomes more important than the mission to a man who cannot bear to lose another agent...and to a woman who is more than just a prostitute, who finally realizes her courage could change history.

When Germany crushed the Maginot Line in 1940, Brigitte Durand lost not only the man she loved but any hope of a future unsullied by the horrific realities of war and occupation. Penniless and alone, with no recourse but to sell her body for scraps of food and coin, Brigitte finds herself doing the unthinkable -- returning to her family home and transforming it into a Germans-only brothel. Shunned by her countrymen for fraternizing with the enemy, Brigitte refuses to let the Germans own her completely. Known only as the "Grateful Patriot," she smuggles badly-needed supplies to the nearby chateau, a secret refuge for downed Allied airmen. Her spark of independence does not go unnoticed, bringing her to the attention of Flame, a Resistance cell seeking to gain intel on the local bridges in advance of the pending invasion. When American Tom Jaeger was shot out of the sky he found refuge with Flame operatives. But rather than smuggle the pilot out of France, an agent hatches a daring plan. Leveraging Tom's Aryan looks, he'll pose as a Nazi in order to gather intel the sympathetic Brigitte acquires from her other clients. The plan seems foolproof -- but when Tom is betrayed and Flame is brought to the brink of ruin, this ragtag band of unlikely compatriots will risk everything to save one of their own. And Brigitte is faced with a choice -- to accept the lies the occupation forced her to believe of herself, or to risk everything on grace and the chance to reclaim her soul.

The World War II era is a period rich in history in drama, my favorite time period to study and read about. Tracy Groot's novel is an extraordinary addition to the ever-swelling lists of wartime fiction, one of the best to come my way in recent memory. She crafts her tale around real historical events -- the critical importance of the "Pegasus" bridge would play in the D-Day invasion, located in Benouville, a town with a Germans-only brothel. And that fact sparked the seed of the idea that would become Brigitte and Tom's story. Groot takes the factual existence of the brothel and asks what if -- what if that brothel contained an Allied sympathizer? And thus this "impressionistic" retelling of the biblical story of Rahab was born. As a prostitute, Rahab is perhaps the last woman one would think would appear in the genealogy of Christ (Matthew 1:5), and in a similar fashion when Brigitte is first introduced she is sure her choices have locked her into a prison from which there is no turning back. But like the biblical counterpart who loosely inspired her character, Brigitte discovers the grace that covers her past and the strength to face the future -- all because she took an extraordinary leap of faith.

A novel such as this rises or falls on its attention to detail and authenticity, and here Groot delivers in spades. Flame of Resistance is a tale both sweeping in its historical scope and extraordinarily intimate as a character study of grace and survival under pressure. More than "just" Brigitte and Tom's story, this is a powerful exploration of a community under oppression and how a small group of individuals choose to respond when faced with overwhelming darkness. Brigitte is perhaps the most boldly-painted symbol of the subjugated French -- hopeless, abused, brutalized. But when Tom falls from the sky with his blue eyes, down-to-earth manner, and American bravado, he is the first tangible symbol of hope that Brigitte has encountered since the war began. Living in the hope-sucking vacuum of the occupation, Brigitte was blinded to the possibility of change until she takes a step of faith (joins the Resistance), believes in the impossible (meets Tom), and realizes that she is more than the sum total of her mistakes, that every day brings with it a new chance to defy the darkness and  choose life.

This novel is a slow burn, taking its time setting the stage and establishing the cast of characters that will band together in an extraordinary act of community and courage. If I have one complaint, it is that Groot's use of Flame members' real names and aliases are loosely interchangeable and not initially clearly established. But as the novel progresses, the story hits its stride, building towards a tense, tautly-plotted climax. Groot pulls no punches, from the stark effects of Brigitte's occupation to the raw horror of an SS interrogation. Her meticulous research and crisp prose, combined with richly-drawn characterizations results in an absorbing, challenging read. Flame of Resistance is a gritty, powerful story of hope lost and reclaimed, where the light of the subtly woven strand of faith shines all the brighter for the darkness. While this may have been my first Tracy Groot novel, it certainly won't be my last.
Posted by Unknown at 4:54 PM

(What? No glowing post about Grimm yet? After your excitement the other day I totally expected instant reaction.)

@Amy Jane - LOL! Oh that is coming! But I am SO behind on things I want to blog about...I'm trying to check some things off my to-do list. :)

@Rachel - I think you will like this book. :) I was quite impressed! Also, I agree...doing both at the same time might make your head explode. ;)