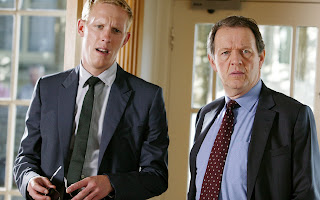 Inspector Lewis concluded its fifth series-run on Masterpiece Mystery in fine form last Sunday with The Indelible Stain. (Side note: How is this slate of new episodes over ALREADY? Let the Hathaway withdrawals commence...) This episode was chock-full of family secrets, lost love, and prejudices -- in other words, Lewis at its best. :) To get us started here's the episode summary from the PBS website:

"No platform for racists!" shouts a crowd of protesters, interrupting the controversial lecture of American academic Paul Yelland (David Soul), a guest of Oxford's Department of Criminology. An anti-racist extremist hurls a threat at the professor, and later that night, Yelland is discovered strangled to death with a noose made from his own tie. The investigation draws Inspector Lewis (Kevin Whately) and Hathaway (Laurence Fox) into a criminology department rife with murder suspects, many of them already guilty of lesser crimes. Star student Nina Clement is having an affair with the husband of the coldly ambitious department head Anne Rand, who brought Yelland to Oxford solely to generate attention for her department. Now, with the papers headlined "Lynched," she relishes the publicity. But in an atmosphere of racial tension made worse by Yelland's "theory of dangerousness," which asserts that evil can be located in genetics, Lewis and Hathaway must move quickly to find the killer. Genetics have no place in their investigation; it's motive — whether politics, ambition, or vengeance — that will reveal the indelible stain of murder. David Calder (Bramwell) co-stars. (90 minutes; TV-14)

The episode opens with brief, rare glimpses of Lewis (Kevin Whately) and Hathaway (Laurence Fox) off the clock. Lewis is enjoying a pint while watching a sports match at a local pub, interrupted only by an obviously painful tooth. One guess as to how long he's been letting himself suffer with that problem. *wink* Hathaway is in JEANS and a SWEATSHIRT PULLOVER, curled up in a chair looking pensive with a stack of books by his side. Just to be clear, the show could've stopped at this point and I would've been very happy. I love him. :)

Meanwhile as is the Oxford norm, trouble is brewing at the lecture of a visiting and very controversial American academic, Paul Yelland (David Soul). Yelland espouses a new, genetics-based way of looking at the "Theory of Dangerousness" -- essentially profiling, a way of looking at crime that oft-times finds its strongest advocates among those who espouse racist views. (Way to represent the US badly, Yelland, yeesh.) Yelland's controversial theory meets with some vocal protests, but he's so tipsy and tired he hardly seems to notice. He's escorted back to his quarters by Professor Frazer (Patrick Baladi), husband to Anne Rand (Nancy Carroll), the professor responsible for bringing Yelland to Oxford, and a student he's *ahem* very close to -- Nina Clemens (Pippa Bennett-Warner). Later that evening two of Nina's roommates -- Will (Richard Southgate) and Emily (Harret Madeley), notice Yelland's lifeless body hanging in the window on their way home. Was he so troubled he took his own life, or could his ideas have earned him enemies who wanted him silenced?

Chief Superintendent Innocent (Rebecca Front) wants the case solved and closed quickly. The case is extraordinarily high profile -- not only because Yelland was a visiting lecturer, but because his ideas have brought racial tensions in the area to a boiling point. The pool of suspects Lewis and Hathaway must wade through is endless. There are the vocal, anti-racists extremists who turned up to protest Yelland's talk. There's Anne Rand, the head of the Criminology Department, who seems to relish the publicity Yelland's ideas and death have brought to her department. And then there is Nina, whose vocal opposition to Yelland's ideas suggest she may have had motive to act -- but when she starts to receive racist, threatening text messages, it raises the question of whether or not Yelland's ideas have galvanized those with racists beliefs to act out. 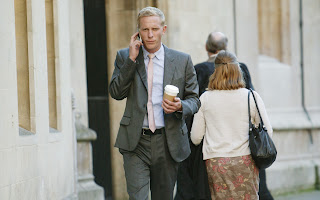 As the investigation proceeds two main story threads come into play that end up colliding in a deliciously unexpected way. First up there is Nina, the whip-smart student whose vocal opposition to Yelland's ideas raise suspicion that she could have a stake in silencing the professor. But she's having an affair with a very married professor whose wife just happens to be the head of the Criminology Department -- and that woman will do anything to keep her husband in line and further her own career ambitions. On top of that mess, Nina is in the middle of a love triangle that she doesn't even know exists since her roommate Will is in love with her and their other roommate Emily is in love with him. That would be enough of a twisty story, no? But this show being what it is, the script delivers more... :)

While there weren't many familiar faces guest starring in this episode, there was one I was interested to see again -- Nina Sosanya as the quiet Criminology Department assistant Lilian Hunter. Sosanya has appeared in Doctor Who as well as my favorite episode of ShakespeaRe-Told, the modern adaptation of Much Ado About Nothing. Lilian's story is a fascinating one, as it's revealed that Yelland was actually her father -- and she'd hoped that during his trip to Oxford she'd be able to confront him about abandoning her & her mother years earlier. A prof who espouses racially-charged views has a half-black child? Yelland, you were a mess. 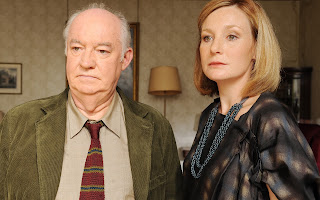 As if Yelland's unknown daughter wasn't enough of a potential motive for murder, it turns out that her mother was in the middle of her own love triangle years earlier -- where the other man was Andrew Lipton (David Calder), who just happens to be Nina's tutor. Insane, right? Oh what a tangled web. (Side note: Add this film to the list of productions that has referenced/featured A Tale of Two Cities this year...go Dickens!) Calder has appeared in Inspector Lynley, The Mummy: Tomb of the Dragon Emperor, Miss Marple, and the recent Titanic miniseries. I loved how the story of Lipton's past played out -- Calder has a quiet, grandfatherly demeanor, and watching the painful layers of his past come to light, watching him come undone -- it probably ranks as one of my favorite "twist" endings in the show's history.

This episode was extraordinarily well-scripted, delivering a satisfying, twisty drama -- and more than that, some unexpectedly comic moments for Lewis and Hathaway fans to treasure. Lewis's dentist phobia is about as broadly comic as this series is ever going to get and I relished it. I loved Hobson's (Clare Holman) joke about how she'd be glad to remove his bad tooth -- if he was dead! -- and then she sets him up with an appointment at her dentist which he promptly ditches after Hathaway calls with a convenient murder. :P And then Hathaway setting Lewis up with his dentist? Priceless!

Innocent also has one of her best moments in the series, when early in the investigation into Yelland's murder she calls Lewis, Hathaway, and newbie Peterson (Jason Durr) into her office and they sit in a line-up in front of her desk like schoolboys at the principal's office. That scene had me laughing so hard!

The introduction of Peterson and his undimmed-interest in Hobson (despite a lack of reciprocal interest on her part) has brought an interesting dynamic to the will-Lewis-or-won't-he-ever-ask-her-out question. It KILLS me year after year that they are so perfect for each other, and she so obviously likes him, and this year especially he's doing NOTHING ABOUT IT. Grrrr. :P I am good grief, this entire series of films has been peppered with Hathaway of all people making sly suggestions that Lewis actually do something and ask  Hobson out. It broke my heart into a million pieces when Lewis referenced the current case as an example of how sometimes one can't change, it's simply too late -- and I may or may not have been screaming "nooooo!!!!" at my television when that happened. This show HAS to give Lewis and Hobson shippers a reason to hope next year, particularly since the way things stand right now, the show's sixth series will be its last (seventh in the UK). (In case you were wondering I'm in total denial about this show ever ending, and will live in denial until absolutely forced to believe otherwise.)

I adore this show, and this year's slate of episodes has proven to be extraordinarily strong and thoroughly enjoyable. The Lewis and Hathaway partnership has been on fire this season -- I love where they're at in their friendship, how they can now tease and needle each other, and both care very deeply about each other's life -- but being stoic and emotionally repressed, the latter only comes out in brief, priceless glimpses that fans like me absolutely treasure. :) This series I think my favorite episode is a tie between this one and Generation of Vipers -- how about yours? This show is at its best delivering twisty melodrama, and this season has gone above and beyond. Love it. :)
Posted by Unknown at 5:18 PM

LOVED this episode! Not only was the story complicated, but the dialogue was great! The whole tooth story was a hoot. I can't believe this season is over already--and I can't believe it will end next season, so soon after you introduced me to it! I guess that means we'll have to start picking up the seasons on DVD.

@Anne - Yay, so glad you enjoyed this episode too! Was it just last year that we "met" online and you started watching Lewis? My how time flies! At least we'll always have the DVDs...and now new Endeavour episodes to look forward to! :)

Yeah, Hobson's going to move on pretty soon. If there's one thing a woman won't put up with, it's a guy who's given every opportunity to make a move and lets it pass.

I think I liked Generation of Vipers the best this season. You can't beat Toby Stephens and Laurence Fox in the same show. :)

@Tasha - SERIOUSLY. They really dialed back on Hobson's presence this season. :/

And so very very true about Toby Stephens AND Laurence Fox in the SAME film. Brilliant. :)

I feel your pain in so many ways. There are never enough episodes. I am so sad that they've already finished filming the final series and the boys seemed to have already moved on, at least Lawrence Fox has. No telling when we'll finally get this on PBS. And there wasn't nearly enough Clare Holman as Hobson this season. I wanted to bloody wring Lewis' neck at the end of the episode. Alas. (Love your blog, by the way - so glad I stumbled on to via my Lewis love.)

Just found this blog, while searching for any last bits of Lewis. (A support group is needed!) I too loved this show and have watched Ramblin' Boy over and over because we (fans) earned that kiss!

We know Kevin and Laurence are amazing, but Clare Holman is priceless and didn't get enough credit in the press for her part in the show as far as I'm concerned. I think every gal longs to give those kind of glances properly! (Rebecca Front is great too. But Clare is establishment to the series.)

Any chance you know the location in this episode where they filmed Professor Lipton's cottage? I love that house and want to do a drive by the next time I'm in Oxford! Thanks!