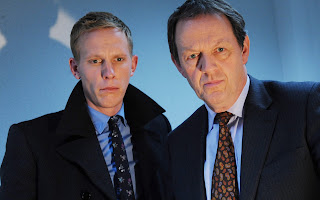 Well wasn't this episode a twisty hot mess? :) The third brand-new episode of Inspector Lewis featured on Masterpiece Mystery this season features swingers, fetish photographs, and a PRIMATE LAB!!! I can't think of another show out there that could make that list of plot elements work except Lewis. :) Here's the episode summary from the PBS website:


Sometimes murder extends its reach even beyond the medieval walls of Oxford. So it goes when suburbanites Nick and Honey Addams return home after a night out to find their babysitter, Jessica Lake, dead, her wrists symmetrically bound to the Addams's bed. Her death pose is shocking; more so is Inspector Lewis (Kevin Whately) and DS Hathaway's (Laurence Fox) discovery of fetish photographs featuring Jessica in similar restraints. With Jessica as her muse, the provocative "Oxford type" artist, Marion Hammond, used fetish photography to explore the dual nature of passion: innocence and corruption. In the dark and varied worlds at the outskirts of Oxford, Lewis and Hathaway search for answers in an abandoned children's home, a primate lab, and the upscale home of smug venture capitalist Tom Garland. To piece together the terrifying symmetry of Jessica's murder, Lewis and Hathaway race to solve the mystery of the girl behind the muse. (90 minutes; TV-14) 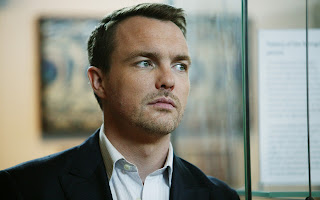 The episode opens with Nick (Ciarán McMenamin) and Honey (Georgia Taylor) Addams awaiting the arrival of Jessica Lake (Abi Hardingham), a babysitter scheduled to watch their toddler-age son while they go play tennis with Nick's boss and his wife. There is obviously a great strain on the Addams marriage, and it's about to get worse as the couple returns the next day to find their toddler shrieking and their babysitter dead, tied in a symmetrical bondage position to their bed (I would SO be moving). The careful arrangement of Jessica's body suggests premeditated murder -- but since the Addams spent the night away from their home at the last minute, and Jessica was a replacement babysitter, was she the target or a "convenient" replacement? 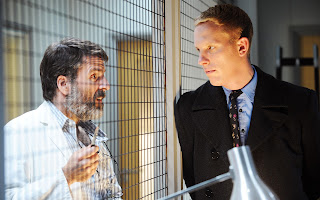 Lewis (Kevin Whately) and Hathaway's (Laurence Fox) investigation takes them to an animal behavior lab at Oxford, where the Addams's original babysitter, Yasmin Randall (Leila Mimmack), had been asked to work a last-minute shift. Jessica not only knew Yasmin, but she had been hired to work at the lab by primate researcher Dr. Bob Massey (Con O'Neill), who just happens to be the father of her boyfriend Gideon (Pierro Niel-Mee). As if that isn't enough of a tangled mess of associations, the investigation uncovers S&M-style photographs of Jessica, reminiscent of her death pose, that lead Lewis and Hathaway to a rather controversial, avant-garde photographer, Marion Hammond (Lucy Cohu). Marion was working on an exhibit featuring Jessica's poses entitled "Unspeakable Acts." Marion's somewhat devil-may-care attitude towards her controversial work raises the possibility that she could have been involved in Jessica's death, all in the name of her art. Or perhaps it was Silas (Bronson Webb) and Kyle (Merveille Lukeba), fellow squatters with Jessica at their now-abandoned former home for troubled teens -- the former distinctly unbalanced and determined to exact superhero-style street justice on Jessica's killer.

The Addams's marriage troubles come into play in a disturbing fashion when Lewis and Hathaway visit the home of Nick's boss to verify the couple's alibi. Tom Garland (Gary Kemp) and his wife Davina (Katrine De Candole) are wealthy, privileged, and used to getting their own way -- and their home, decorated with Marion's highly-sexualized photographs, suggest the couple explore the behaviors exhibited in Jessica's photos and death scene. In typical Lewis fashion, Marion's work has touched and connected all of the disparate individuals, from wildy varied backgrounds, that touched Jessica's life prior to her death -- the question is, who took the images displayed in the photographs too far? 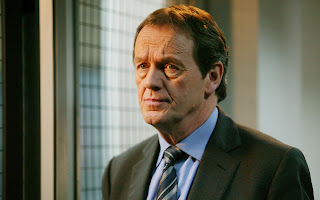 This was a fantastically twisty, convoluted episode. I loved seeing Ciarán McMenamin on television again, though I'm really starting to question why I like him so much. Aside from his hit-or-miss turn as Matt on Primeval, he seems to play rather questionable (??) characters a little too well, if you know what I mean. Comes off as wishy-washy after a while, poor guy. The revelation that he pressured his wife into participating in a swingers' session with the Garlands absolutely made my skin crawl. Nevermind that the couple didn't follow through with it -- the idea in and of itself is just...ick, you know? McMenamin saves his character by the end of the episode, but barely. Speaking of the Garlands, the wife Davina may look familiar -- she played a brief role in X-Men: First Class as well as a memorable appearance in Zen.

My favorite guest star in this episode was Lucy Cohu as Marion. I think she has such a striking on-screen presence, and while I can't say I liked her occupation in this film, I loved her style. :) Cohu played Jane Austen's sister-in-law Eliza in Becoming Jane, Captain Jack's daughter in Torchwood: Children of Earth, as well as appearing in Ballet Shoes and Miss Marple. Eventually we'll see her on Masterpiece in the second series of the rebooted Upstairs Downstairs as well.

I confess the mystery in this episode kept me going until nearly the end. I love how it set up Gideon's father as a parental hero of sorts, as he is the one who stayed to raise Gideon after his mother -- the icy Stanza Massey (Anna Wilson-Jones) -- couldn't handle motherhood and left her family, doing "penance" by working with the youth home that raised Jessica and her squatter roommates. But it is Dr. Massey who, somewhere along the line, has begun a slow descent into madness. Alternately repelled and fascinated by Jessica's artfully staged photographs, he longs to recreate the work -- to the point that he does so twice, and nearly a third time (after he attacks his son!) when he confronts Marion as the creative force behind the photos. That scene was one of the series' best suspense-wise, as the chills of having a madman invade Marion's home like that was brilliantly played. I loved the fact that out of this tragic family mess, Gideon's mother steps up and realizes that her son needs her as an active presence in his life, the conclusion hinting at a more hopeful future for the tragedy-ridden family. Side note: When Chief Superintendent Innocent (Rebecca Front) turns up at Marion's apartment to oversee Dr. Massey's arrest -- am I forgetting something or does this series bring Innocent into the "field" more frequently than ever before? I'm just used to seeing her in the office, lol! 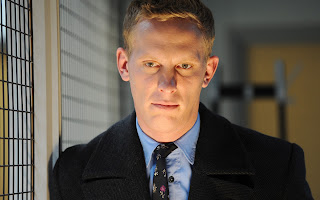 As is the norm with this series, the episode provides a slew of wonderful Lewis and Hathaway-centric character moments. From their good-natured ribbing of each other to the fantastic way they've learned to practically read each other's minds -- this duo has come so far, and I never tire of watching each tiny nuance and expression exhibited in their interactions. I was especially touched by how Jessica's death prompted Lewis to call his own daughter -- unless I'm forgetting something, she's never featured in an episode. But I love how the show reminds us again and again of just how much he loves his family. I also loved the moment when Lewis asks Hobson (Clare Holman) about her report on Jessica's death -- and she teases him good-naturedly about using the term "funny business" instead of something more direct like assault. They are SO CUTE TOGETHER.

There is also a lot of humor at poor Hathaway's expense, but I loved every second of it. There's nothing quite as satisfying as seeing the straight-laced, oft-times somber Hathaway getting a bit rattled. I loved how he goes to the Addams's home to look for their son's favorite toy stuffed giraffe, and gets positively drowned in kid-related items. And then when he realizes he saw the toy in the friggin' primate lab, and has to go into retrieve it -- but only after a severe warning about not looking "them in the eyes" OR ELSE -- oh, it was an undeniably serious moment, critical to the investigation, but seeing Hathaway so tightly wound, it cracked me up!

I thought this was one of the series' more suspenseful episodes, full of the show's trademark twists and turns. Thoughts?
Posted by Unknown at 1:15 PM

Loved the ep...great review, but the main thing I kept thinking was how I want to become a squatter and hang out at an awesome property like that!!! Sure, it was a little run down, but still really amazing. Also, loved Hathaway in that coat! And why won't my hair behave like Lucy Cohu's?!

@Lori - Ohmygosh you are not kidding...that property was amazing. I couldn't believe it was just there for those kids to appropriate! And thanks for bringing up Hathaway's coat, because it was amazing. :) Also...I hear you about Lucy Cohu's style. She looked terrific in this episode. I need her hair and her style. LOL!

btw...did you look at Laurence Fox's twitter? It was posted on that YouTube video of his. Looks like they are having waaayy too much fun on set.

Seriously, I would watch that coat read the phone book. It is a thing of beauty and a joy forever.

Hot mess is the word. :) There was a little too much going on in this ep for me, but it did have a lot of great one-liners from Lewis and Hathaway. I loved it when Hathaway was singing, "Row, row, row your boat." And who knew Hathaway was a comic book geek!

@Lori - I follow him on Facebook but I must've missed that video link, I'll have to try and hunt it up.

@Joni - Welcome back! And amen to everything you said about the coat. :)

@Tasha B. - Seriously. :) Remember that episode where someone set a bed on fire and tried to burn up Hathaway? That was a hot mess too. But something in me relishes it when this show goes the REALLY soap opera route. ;) And I love that Hathaway is a comics geek. COULD HE BE MORE PERFECT?!?!