Finally, finally we have a proper trailer for the upcoming season of Doctor Who! And it is amazing. This season is gonna be grand! :)

Earlier this week, the first promo "launch" image for Season 7 was released, and much like the last few seconds of this trailer, it is intense: 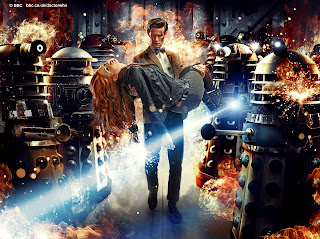 The new season will see the last days of the Ponds, with Karen Gillan and Arthur Darvill making their final rollercoaster voyage with The Doctor (Matt Smith). Amy (Karen Gillan) and Rory (Arthur Darvill) have been at the Doctor’s side for more than two seasons but what will he do after their heartbreaking departure?

New guest stars so far confirmed to star will include David Bradley, Rupert Graves and Mark Williams. Season 7 will then see a dramatic turn of events when The Doctor meets a new friend – the recently-announced new companion, played by Jenna-Louse Coleman. Prepare yourselves for thrills, adventures and dramatic surprises as the show builds towards its enormous, climactic 50th anniversary year.

Fourteen big, blockbuster-movie episodes – each a brand new epic adventure featuring new monsters and some familiar foes as you’ve never seen them before.

If Moffat kills off Amy or Rory, I swear, I will hunt him down.

@Charity - I could see it going either way...this season looks like a roller-coaster.

Yeah, Moff is great at being cruel. I just hope it doesn't end how I think it might -- sure, cast Amy and Rory back in time and leave them there... just don't kill either one of them for reals, pleeze!

(BTW, love that promo art... that will be my next PC wallpaper!)

@Charity - That's a good theory...the back in time thing. I hope he doesn't kill both or either of them too -- but I worry that he might because that has never been done before, since the show was rebooted at any rate -- yes, the Doctor has lost friends -- just not in that very PERMANENT manner. I am really excited but very nervous, lol!

I love the promo art too! They BETTER make a poster of it so I can put that on my wall! INTENSE!!!

@Renee - A poster? Oh that would be amazing!

@Ruth, thanks for posting. This Brit is excited!!

@Chris Hall - Hopefully the episodes will air here at the same time -- or at least close -- here, so we can discuss! Thanks for commenting! :)

Oooh! Jenna-Louise!? Loved her in the "Titanic" miniseries. :-)

@Rissi - I'm sure I'll bawl when Amy and Rory leave, but I'm excited about the new dynamic a new companion will bring to the show. :)

Oh my word! I can't wait! It looks like it's going to be a blast! Ahhh!!! Thanks for sharing the trailer!

@Shelby Swing - You're welcome! And thanks for stopping by!