Well, I certainly didn't intend on falling behind in my Inspector Lewis-related blogging, but at least with my recent battle with bronchitis and pneumonia I have a good excuse. *wink* Thankfully I'm well on the road to recovery, and with that behind me and the recent release of the Series 5 DVDs, I fully intend on catching up!

The second episode of Inspector Lewis's fifth season on Masterpiece Mystery features two of my favorite things -- Shakespeare and Toby Stephens (I figure by this point my passion for Lewis and Hathaway goes without saying, lol!). Here's the episode summary from the PBS website to get things started:


Elizabethan tragedy collides with 21st-century technology when a lonely feminist Shakespeare scholar, humiliated in a viral video leaked from a dating site, takes her life in despair. Miranda Thornton had numerous enemies who might have relished her downfall: a property developer, a former student, a jilted romantic hopeful, and an anonymous online gadfly. Determined to assign blame for Miranda's anguish, Inspector Lewis (Kevin Whately) begins his investigation at the scurrilous video-hosting blog, TheBarker.biz, and before long, he is convinced of Miranda's murder. But when an Oxford youth connected to the case is violently killed, Lewis and Hathaway (Laurence Fox) fall victim to TheBarker's sensational accusations. In social media stripped of identity and humanity, mirroring only loneliness, Lewis and Hathaway must cut through swathes of Internet anonymity to penetrate a Generation of Vipers. Toby Stephens (Jane Eyre) guest stars. (90 minutes; TV-14) 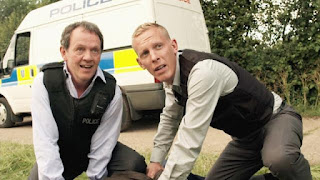 This episode opens with what is perhaps one of my favorite Lewis (Kevin Whately) and Hathaway (Laurence Fox) moments in the entire show's run to date. They're out in the field, on the perimeter of an operation taking down a large marijuana-growing operation led by a new-to-the-show member of the force, Detective Inspector Peterson (Jason Durr). It's an incredible treat to see Lewis and Hathaway out of their element, in the field -- and supposedly far away from the center of the action -- discussing the more "action-y" side of police work. But when a member of the drug operation makes a break for it and heads straight for their stakeout point on the perimeter, my favorite Oxford investigators really get a moment to shine -- getting in a tussle with the runaway suspect and ending up on the news! Lewis and Hathaway are generally so cerebral it was a real treat to watch them in a physical take-down. *wink*

Meanwhile, Oxford English professor Miranda Thornton (Julie Cox) is running into trouble with some of her students. Years earlier, Thornton had written a paper that gained her a certain measure of notoriety on why women don't need men. But the Shakespeare-savvy professor (whose clothing choices reveal her to be sadly stuck in something like 1992) has had a change of heart -- longing to find a romantic soulmate she filmed a dating video for the Heart & Soul website. The intensely personal video was stolen from the supposedly secure dating service site and posted on TheBarker.biz, garnering a host of cruel and thoughtless comments. After being confronted by a would-be (and very married) suitor, reporter Francis Mitchell (Alexander Hanson), and running into a professional nemesis, the wealthy David Connelly (Toby Stephens), whose plans for turning an idyllic Oxford field into cheap, affordable housing, Miranda returns home to nurse her wounded feelings -- and is discovered dead the next morning. 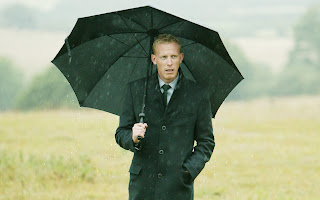 I thought this was a fascinating episode on multiple levels. Not only does it address the media-saturated nature of our society, where people can be bullied and humiliated online, dehumanized really behind the "safety" of a username, it also says much about the destructive nature of secrets and grudges -- and on a happier, but no-less wistful note, reveals a very human side to Lewis the investigator, as this is a case that hits very close to home for our titular hero. Everyone assumes that Miranda committed suicide, her humiliation and loneliness to heavy a burden to bear. But Lewis is sure that the professor was murdered, as he cannot fathom a woman of her intellect -- a woman willing to take a risk, willing to open herself up to the possibility of love -- would take her own life so easily without fighting back against whoever exposed her to ridicule on The Barker's website. And that, my friends, is just one of the many reasons I love Lewis -- he may be taking WAY TOO FRIGGIN' LONG to ask Hobson (Clare Holman) out on a proper date, but he has LOADS of compassion. Miranda's case makes for a solid mystery film on its own, but Lewis's response to it elevates the script and reminds us of the very human toll of "anonymous" internet cruelty and harassment.

It took me a while to place Julie Cox when she first appeared on-screen. I remember her most from an early role in an episode of the Richard E. Grant-helmed The Scarlet Pimpernel television series. Cox has also appeared in Miss Marple and more recently, an episode of Zen. She's got a youthful, almost waifish appearance, and that combined with her flowing, oversized clothing choices emphasizes her character's emotional vulnerability -- traits she conveyed heart-breakingly well during her time on-screen.

The suspects that Lewis and Hathaway uncover during the course of their investigation weave into a tangled web of red herrings and venomous grudges worthy of one of Shakespeare's plays. There's Sebastian Dromgoole (Freddie Fox), a student involved in a recording project of all of Shakespeare's plays who resents Miranda for refusing to recommend him for post-graduate work in the US. Freddie Fox is Laurence's cousin, most recently appearing in The Three Musketeers as King Louis XIII and The Mystery of Edwin Drood. The Fox family has a veritable monopoly on the acting profession. I loved the moments when Hathaway got all up in Sebastian's face when he mouthed-off or refused to answer questions -- given that they're cousins one has to think they had some fun making the smart-aleck remarks about each other that the script required. *wink* 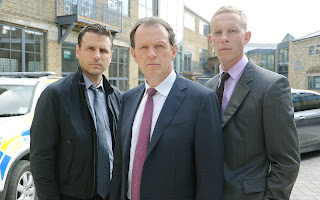 Sebastian's girlfriend Briony is played by Roxanne McKee. Similar to how Miranda's death gets under Lewis's skin, Briony gets to Hathaway. She's an employee of The Barker, and he correctly surmises that of anyone they've encountered, she has the heart to want to help -- and when she does, she ends up dead, her death leaving Hathaway clearly guilt-stricken and rattled. She's not the only character to test my darling investigator -- Chief Superintendent Innocent (Rebecca Front) orders that he partners with Peterson late in the investigation while Lewis follows a separate line of inquiry. Peterson and Hathaway couldn't be more dissimilar -- their brief scenes together were a fun glimpse into what the world of the show would be like should Hathaway be partnered with someone who (initially, anyway) drove him up the wall. :) Peterson also expresses an interest in Hobson, something Lewis is quite unable to wrap his head around. I can only hope that someone like Peterson will finally prod Lewis into actively pursuing Hobson, because frankly it BREAKS MY HEART that they aren't an official couple. Also, is it just me or did this show really do a great job giving increased screentime to the officers that work with Lewis and Hathaway, like DC Lockhart (Kemi-Bo Jacobs)? Long overdue, IMO!

In the trademark fashion of this show, everyone Lewis and Hathaway meet who seems, at first blush, barely tangentially connected to the case, turns out to be somehow involved. One could argue it's coincidental...but personally I love how the show brings a dash of soap opera to its storylines. Almost without fail the twists and turns in each episode are smartly done, keeping readers on the edge of their seats and providing a wholly satisfying hour and a half of mystery viewing. In this case, three individuals from Miranda's past converge on her present, and her death leaves Lewis and Hathaway to sort out the tangled mess of threads her death leaves behind. First up is Kit Renton (Daniel Lapaine), owner of TheBarker.biz -- and a total jerk as he gives my beloved Lewis and Hathaway a bit of bad press on his stupid website. :P Lapaine is a Mystery vet from way back when Jericho aired, as well as making an appearance in a Poirot episode. Then there is Samantha Earnshaw (Kate Maravan), the seemingly classy owner of the Heart & Soul dating service. Appearances are incredibly deceiving sometimes, hmm? :P 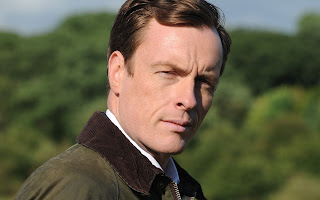 The biggest draw of this episode for me was Toby Stephens as wealthy, embittered investor David Connelly -- a poor boy who made good and never quite lost the chip on his shoulder brought on by his time at Oxford with Miranda, Kit, and Samantha. Toby looked AMAZING in this episode -- those sharp suits! Excuse me while I swoon! :) And his brooding and angsty behavior...all it did was remind me of what a wonderful Rochester Stephens played -- and a reminder like that is never a bad thing. I do wish he'd played a more...um...likeable? character here, but I can't even hold that against him...it's such a treat to see him on my television. :) I LOVED how the script handled the revelation of David and Miranda's college love affair, and how tragically it fell apart -- and years worth of heartache could've been avoided, if only David's STUPID PRIDE hadn't kept him from reading Miranda's letters. *headdesk* Stupid Toby. :P

A Generation of Vipers is Lewis at its finest, serving up a deliciously twisty story full of secrets, grudges, and revenge plots years in the making. I loved how this story showcased Lewis's compassion, particularly in how he could relate to Miranda's desire for a "simpler," tech-free life. Lewis himself is anything but tech-savvy, so forcing him to navigate the murky waters of the internet was a nice touch. I also loved how this episode forced Hathaway to confront the tragic results of his choice to get a civilian, Briony, involved when their investigation seemed to stall. It was also a lot of fun to see him deal with the blunt, direct Peterson. :) A thoroughly enjoyable episode -- I'd love to discuss! :)
Posted by Unknown at 5:07 PM

This was a really good episode. I loved the twist at the end with Toby Stephens being in love with the professor the whole time. C'est trajique! I was glad he turned out to be a good character after all.

I was wondering what you'd say about this one...that scene at the beginning was the absolute best!!! I so love the Lewis/Hathaway interaction this series!

And poor Toby had to play an idiot...

@Lori - They have been on fire this season. I just love it!

And yes, poor Toby the idiot...at least he got to wear a sharp suit. HA!!

Yes...at least he did look GOOD!

This was a fantastic episode! I agree, "Lewis at its finest." The way that the show incorporates literary references, soap opera-esque storylines, dead people, and (as this show did exceptionally well) current social events, is really what makes Lewis stand out. Thanks as always for your wonderful reviews! I always love seeing your take on things.

@the asian invasion - Thanks so much! Always great to meet another Lewis fan -- I couldn't agree with you more! :)