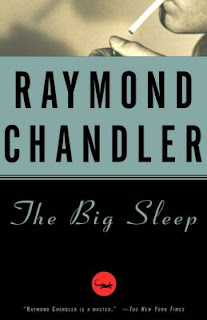 When a dying millionaire hires Philip Marlowe to handle the blackmailer of one of his two troublesome daughters, Marlowe finds himself involved with more than extortion. Kidnapping, pornography, seduction, and murder are just a few of the complications he gets caught up in.

The Big Sleep, first published in 1939, introduced the world to Philip Marlowe, private detective, a character who would go on to become synonymous with the concept of "hard-boiled" crime fiction. I've long been a fan of film noir, notable for its fast-talking, world-weary detectives, glamorous femme fatales, and striking use of shadow and light to illustrate the seamier side of life on-screen. Considering how much I love classic examples of the film noir genre such as The Big Sleep or The Maltese Falcon, it is all the more shocking that it has taken me this long to read the literary equivalent of those films. Chandler turned to writing in his mid-forties after losing his job with an oil company due to the Depression, and his writing reflects a hard-won maturity and cynicism. He began writing short stories for pulp magazines, and The Big Sleep was based on two of them -- "Killer in the Rain" (1935) and "The Curtain" (1936).

When Philip Marlowe is called to the home of the wealthy Sternwood family, he's hired by the elderly patriarch to make bookseller Arthur Geiger's attempt to blackmail his wild youngest daughter Carmen disappear. The General has a second daughter, Vivian, married to an ex-bootlegger named Rusty Regan who recently disappeared and may or may not be involved in the younger daughter's current trouble. At first blush what appears to be a fairly straightforward commission -- remove the thorn in the elderly General's side -- is anything but, as Marlowe quickly discovers that the Sternwood daughters have secrets to keep -- secrets that some may be willing to kill  in order to keep quiet. Over the course of his investigation, Marlowe finds himself swept up in a seedy world of illegal pornographers and secret gambling establishments -- and the deeper Marlowe digs, the more bodies start to accumulate. And the answer to one question -- where is Rusty Regan? -- threatens to destroy the Sternwood reputation and silence Marlowe forever.

Like the classic 1946 film adaptation that featured Bogart as Marlowe, the movie's source material twists and turns through the seamy side of  a Los Angeles on the brink of exploding into the metropolis it would become in the 1940s during Hollywood's Golden Age. But Chandler is less concerned with Tinseltown's sheen and more with letting us accompany Marlowe as he navigates through the moral and ethical corruptions fostered by the excesses of L.A.'s position as an entertainment capital of the world. One criticism of the film and novel is the twisty, confusing nature of the plot. While this isn't a perfectly plotted novel, it isn't the mechanics of the investigation that captivated me -- it was witnessing Marlowe's responses to the characters and situations he encounters. Chandler's dialogue and prose are razor-sharp ("I don't mind if you don't like my manners. They're pretty bad. I grieve over them during the long winter nights."), an absolute joy to read -- this is a book I savored.

Rich in atmosphere and character, The Big Sleep is an unforgettable introduction to Chandler's work. Marlowe is something like a shopworn knight -- world-weary, sarcastic and cynical, but clinging to a deeply rooted sense of honor and set of principles, he is a uniquely American literary hero. I'll definitely be reading his further adventures.

I love the poetry of this passage so I had to share it:

"What did it matter where you lay once you were dead? In a dirty sump or in a marble tower on top of a high hill? You were dead, you were sleeping the big sleep, you were not bothered by things like that. Oil and water were the same as wind and air to you. You just slept the big sleep, not caring about the nastiness of how you died or where you fell. Me, I was part of the nastiness now. Far more a part of it than Rusty Regan was. But the old man didn't have to be. He could lie quiet in his canopied bed, with his bloodless hands folded on the sheet, waiting. His heart was a brief, uncertain murmur. His thoughts were as gray as ashes. And in a little while he too...would be sleeping the big sleep." (Philip Marlowe in Chandler's The Big Sleep)

I FRIGGIN' LOVE RAYMOND CHANDLER AND PHILIP MARLOWE SO SO SO MUCH.

And that is all I have to say.

I saw the Big Sleep a few months ago, and I have to say the plot made NO SENSE. I was like, Whaaaaaat is going on.

@Jess - YAY! I am so a member of the Chandler Appreciation Club now. :)

@Tasha B. - I think one reason the film especially is a bit confusing is because due to the production code so many plot points had to be eliminated/glossed over (Geiger's business, Carmen's true nature, etc.). That's not to say the book is perfect but the story makes so much more sense on the page lol!