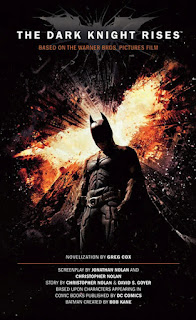 From the team that brought you Inception, The Dark Knight Rises is guaranteed to be the blockbuster hit of 2012. This enthralling official novelization will transport fans into a Gotham City once again under threat.

BATMAN and all related characters and elements are TM and © DC Comics. (s12)

This seems to be the year I turn to movie novelizations for reading material, as Greg Cox's adaptation of The Dark Knight Rises marks the third novel of this ilk that I've read this year. The best novelizations in my view deliver the action of the film in printed form, while taking any opportunities to expand the storyline or deepen characterizations in a meaningful way. As such, this book falls somewhere in between -- better than most, but not as good as it could've been.

The Dark Knight Rises picks up eight years after the events of The Dark Knight. Inspired by Harvey Dent's alleged heroism, the Dent Act gave Gotham's police force the teeth they needed to clean up their city -- and for all intents and purposes, Gotham is a city reformed. But Police Commissioner Gordon and billionaire Bruce Wayne, the erstwhile Batman, bought that peace with a lie -- and a world built on lies cannot help but one day crumble. On one front, there are rumors of an army assembling beneath the city, led by the notorious mercenary bane -- and on another, more personal front, the reclusive Bruce has so withdrawn from life that he's left his resources and power vulnerable to assault. Gotham needs her Dark Knight -- but having been absent for so long, can Wayne survive another war with unspeakable evil without losing his humanity?

Cox has the richest material possible to work with, as in my opinion director Christopher Nolan and his co-writers are masterful storytellers. In several interviews Nolan references Charles Dickens's A Tale of Two Cities as inspiration for the final Batman film, and that classic tale's influence is all over this film, particularly the final third, lending a timeless quality to the chilling scenes of the show trials and Bane's efforts to get the Gotham populace to tear down its wealthy, and the scenes of the resistance led by Gordon and Blake. The source material is extremely solid and dense, so the novelization has an excellent foundation from which to draw its material. Cox does a solid job of translating the film's rich storyline to the page (the paperback version is listed at 415 pages!). But that unfortunately doesn't leave much room for expanding on the storyline.

Selina Kyle perhaps fares best -- Cox gives readers a few additional nuggets of insight into her backstory and character, and fleshes out her relationship with her protege Jen. There are also some additional flashbacks that flesh out Miranda and Bane's backstory. But what I was hoping for, such as more development of the Selina/Bruce relationship, more insight into Blake's psyche, etc., is where this novelization falls short. However, that stands as a testament to the strength and density of the film's visual storytelling. Cox is a better than expected writer, so prose-wise this adaptation is a cut above others I've read. It's a fairly straightforward, no frills, written version of the film -- I just wish there'd been more insight into the characters' backstories and off-screen actions than this rather lengthy, risk-free adaptation delivered.
Posted by Unknown at 12:47 PM

I was a bit disappointed with the movie and I actually thought about reading this book to see if I could save the last part of the trilogy. But if, as you said, there isn't much more depth in it (specially in Bane), I guess I won't. Really liked your blog, by the way! xx

@Paula - Well, if you were disappointed at all in the movie I'd definitely skip this novelization. (I loved the movie so much I just wanted MORE, haha!) And thank you for commenting! See you around here! :)