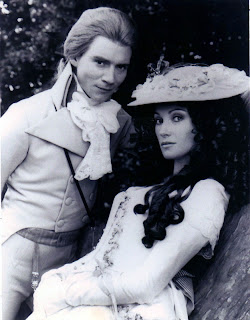 My earliest memories of classic literature were not, as many who know me now might suspect, drawing room romances in the vein of Jane Austen or epic social commentary and meaty family drama from the pen of Dickens, but were instead swashbuckling, romantic adventure stories. Critical in developing my love of fiction and the power of imagination were classic films such as The Adventures of Robin Hood, Captain Blood, and The Sea Hawk, the latter two films based on novels by Rafael Sabatini, a master at penning unforgettable, swashbuckling romances. Sabatini’s pirate-themed adventures led me to Scaramouche (published in 1921, with an excellent 1952 film adaptation), the story of an adventurer during the tumultuous years of the French Revolution, “born with a gift of laughter and a sense that the world was mad,” an apropos description of life during the reign of Madame Guillotine. Something about that time period captivated my imagination, and in my quest for like adventures led me to Baroness Emmuska Orczy’s 1905 novel The Scarlet Pimpernel, a treasure of a find that captured my heart and has in no small way informed my preferences in fiction and film to this day.

When you reference The Scarlet Pimpernel, the first image that comes to mind is most likely that of a dashing, brave English nobleman, masquerading as an inane fop to hide his daring in saving countless members of the French nobility from death at the guillotine. But the novel’s title and its (understandably) male connotation is something of a misnomer. In revisiting the novel for the first time in I don’t know how many years, I was immediately struck by a statement to that effect in the introductory material by Gary Hoppenstand (found in the Signet Classics paperback edition, published in 2000). When I discovered Orczy’s classic novel I fell hard for her eponymous hero and quite probably never stopped to examine the fact that this isn’t the Pimpernel’s story at all, but rather his wife’s, the beautiful and intelligent Marguerite.

In his introduction, Hoppenstand posits that Marguerite is in fact Orczy’s “idealized self,” and approaching the novel with that in mind I have a deeper appreciation not only for my own decades-long love affair with this story but a newly-articulated kinship with its creator. As a reader who almost always imaginatively inserts myself in a novel via the character I most identify with, I can so relate to Orczy’s desire for a fictionalized ideal. In the character of Marguerite, she gifted the world with an unforgettably strong-willed, classy, competent heroine, willing to fight for what she believed in, and one half of a heart-stopping romance that most notably occurs after marriage.

Broadly speaking, a romance is about the meet, the conflict, the resolution – in traditional terms, culminating in a permanent, committed relationship with the implication that marriage is soon to follow. But what happens after the meet cute, the sparks fly, and misunderstandings ensue, only to be resolved by the romance novel’s promise of a happily ever after? In books, films, and especially television shows, as an entertainment-consuming public we’re addicted to the chase, dragging it on for years in the case of the latter (I’m looking at you, Castle) because somewhere along the line we’ve bought into the idea that when a couple commits to one another, the adventure and romance just end – the story has lost its spark, is no longer worth following.

But that concept has always maddened me, and in reflecting on the characters of Marguerite and Percy I’ve come to the conclusion that one reason Orczy’s novel is so timeless, one reason it has resonated so strongly with me for years is the fact that she flew in the face of that convention. In The Scarlet Pimpernel, when we’re introduced to Sir Percy and his acclaimed wife, the initial chase has occurred, the marriage vows recited, but the happy couple has hit a seemingly impenetrable wall. Thanks to Marguerite’s foolish words, used to condemn an entire noble family to death, Sir Percy has shut his beloved wife out of his life, donning an impenetrable mask of indifference, a foppish attitude that drives Marguerite to use her considerable intellect to belittle her husband at every turn.

In re-reading The Scarlet Pimpernel I was struck by a parallel to my “other” favorite classic literary couple from Austen’s Pride and Prejudice. If Darcy and Elizabeth’s story is a tale of pride and prejudice as an obstacle to marriage and a happily ever after, then perhaps it isn’t too much of a stretch to argue that Percy and Marguerite’s adventures is a story of the danger of pride and prejudice in a marriage, and the damage those emotions can wreak in a husband and wife relationship. Marguerite’s journey from embittered bride to passionate fighter for marriage and a future with Sir Percy sets Orczy’s novel apart from more traditional romances.

When “the ‘cleverest woman in Europe’ had linked her fate to that ‘demmed idiot’ Blakeney” in marriage, it sent shockwaves through society as the pair seemed so ill-suited. Initially for Marguerite, it was enough to be “blindly, passionately, wholly…worshipped,” until the revelation of her part in sending a noble French family to the guillotine is revealed and Percy’s passion for his bride transforms into “complete contempt” to which she responds in kind. On this read-through I was struck by how Marguerite entered marriage in love with the idea of being in love – she’s flattered by Percy’s adoration but doesn’t respond to it equally. It isn’t until she discovers that in a desperate attempt to save her brother from the guillotine that she’s condemned her husband to death. It is only when she stands on the brink of losing Percy that she realizes what their love and marriage could be, recognizing and rejecting the emptiness of living life as a glittering “ornament.”

Marguerite and Percy may have begun their marriage wearing masks of pride and indifference, and it is only when she realizes Percy’s true nature that she discovers the sacrifice she’s willing to make for love. Orczy’s fictional “other” is no quivering wallflower needing to be rescued. For the chance to save her husband and marriage she willingly braves the lion’s den, determined to meet Percy as an equal partner, stripped of artifice and disguise, to aid him in his quest or die at his side in the attempt. It’s high adventure to be sure, but that is what makes Marguerite, and her love story, so timeless. Through her, Orczy crafted a fiercely intelligent, capable heroine, a delicate balance of femininity and smarts, whose passionate determination to fight for her marriage’s survival resonates to this day.

This article was originally written for the May/June 2012 issue of Femnista (and appeared in that publication in an edited form), spotlighting favorite Literary Women. Thanks to Charity for allowing me to "reprint" my article here. Please click below to launch the full issue in case you missed it when it released or just want to revisit it. :) It covers everything from Nancy Drew to Margaret Hale!


Click to launch the full edition in a new window
Publishing Software from YUDU
Posted by Unknown at 9:13 PM

This is delightful! (And I'll definitely check out the Femnista you linked. I just discovered the Mag this week with your SciFi/Fantasy link, but I'm already intrigued by what I've read so far.)

This is a delightful article, because it articulates so well the main frustration I have with modern romance, that is, what you state here as The Chase being all.

I've only seen the movie, but now I want to read the book-- I've been hankering after a collection/reading list of married stories-- the ones where being married matters, and not just because it's a crucible one can't escape.

I'm writing my own (of course. *Lindorm* in my menu if you're curious), but I'm still trying to find more to read. Have you ever made a collection of novels or movies where pairing wasn't the end?

I have a collection of fairy tales, but pitifully fewer novels or movies (I haven't finished Chuck yet, but I've been given reason to hope they did okay with that one...).

Anyway, been following your blog in Reader for a while, but this might be a first comment. I've enjoyed your perspectives.

@Amy Jane - Oh thank you so much! I hope you'll be able to peruse past issues of Femnista soon -- I may be biased, but I think it is a fantastic publication! ;)

The novel is well worth reading (I'm a huge fan of the film, but the book is a classic too!). You have got me thinking -- I've never made such a list, but that might be a fun (and challenging?) project. I'd be very curious to hear your thoughts on Chuck -- that show was a favorite of mine. :)

Thanks so much for your thought-provoking comment -- I look forward to further talks! :)

Have you read any other Pimpernel books aside from the first one? I could only get two of them through my local library!

Great article, Ruth! I never thought about the similarities between The Scarlet Pimpernel and Pride & Prejudice, but you're absolutely right.

@Charity - Not yet, but I want to! Most of them are in the public doman if I'm not mistaken and available through Project Gutenberg or free on Kindle. I have a couple of the Kindle freebies downloaded, just waiting for me to have the time to get to them. :) I wish some of them were availabe in omnibus paperback collections, though!

I understand that! There's something much more comforting about holding a book in your hands, rather than reading it on a screen!

@Charity - I do like my Kindle, but my ratio of reading Kindle books to "real" books is probably 1:4 at least! I still prefer copies that can sit on my shelves...i.e., even though the John Carter novels are all (or almost) all available free on Kindle, I still purchased omnibus paperback editions which I found on Amazon, and I LOVE them!