Review: The FitzOsbornes in Exile by Michelle Cooper 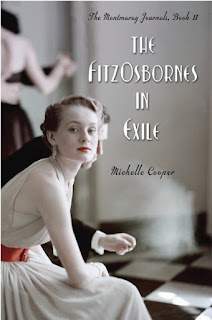 Michelle Cooper combines the drama of pre-War Europe with the romance of debutante balls and gives us another compelling historical page turner.

Sophia FitzOsborne and the royal family of Montmaray escaped their remote island home when the Germans attacked, and now find themselves in the lap of luxury. Sophie's journal fills us in on the social whirl of London's 1937 season, but even a princess in lovely new gowns finds it hard to fit in. Is there no other debutante who reads?!

And while the balls and house parties go on, newspaper headlines scream of war in Spain and threats from Germany. No one wants a second world war. Especially not the Montmaravians—with all Europe under attack, who will care about the fate of their tiny island kingdom?

Will the FitzOsbornes ever be able to go home again? Could Montmaray be lost forever?

The FitzOsbornes in Exile is the second volume of Michelle Cooper's The Montmaray Journals, a fascinating glimpse of European life sliding inexorably toward the second world war. Picking up almost immediately following the conclusion of the previous volume, this novel continues Sophia FitzOsborne's chronicle of life as a princess of Montmaray, the small island kingdom in the Bay of Biscay. Only now, the FitzOsborne family is in exile, driven to find refuge in England by the German aerial attack that decimated their ancestral home. Under the protection of their wealthy and oh-so-proper Aunt Charlotte, Sophia and her sister Henry, brother Toby, and cousin Veronica are forced to quickly adapt to a life the like of which they'd never known. In England, the FitzOsbornes enjoy a life of privilege and comfort, a whirl of social obligations with one aim in view -- to see them advantageously married. But much to Charlotte's chagrin, her charges' brush with death has changed them, and the world's march towards war cannot be ignored forever. Sophia's second journal is part heartfelt coming-of-age memoir, detailing the hopes, dreams, and fears of a girl on the cusp of adulthood and part chronicle and insightful critique of the politics of a world on the brink of madness. Montmaray, and those who love her, cannot remain unscathed.

The first half of The FitzOsbornes in Exile is largely concerned with the personal dynamics of Sophia and her family in the aftermath of the German attack. While each family member copes with the loss of their home differently, Sophia is the first to admit she takes some measure of comfort in the material improvement that comes with life on English soil. But though she may view herself as less capable or immature, especially when compared to her intellectual-minded cousin Veronica, Sophia proves time and again to be the glue that holds her family together. Instead of covering a few brief months, this novel covers nearly three years, allowing Sophia's growing maturity and insight to flourish. Whether watching Sophia negotiate Charlotte's determined attempts to give her recalcitrant nieces successful societal debuts, run interference when Henry becomes too trying (loved Henry training the Spanish evacuee children as "lethal" Girl Guides), or cope with the first stirrings of new romance, Sophia proves to be an enchantingly relatable, savvy heroine.

I particularly appreciate how Cooper filters the volatile social and political tenor of the period through Sophia's uncannily perceptive  viewpoint. Unlike Veronica, who lives and breathes politics, Sophia is more of an everywoman character. And as such she gradually awakens to the horror of the inevitable advent of war, and the Nazi menace, so do we as readers. It is a particularly effective method of illustrating the ease of complacency's lure, and the frustration and horror attendant in being one of the first to see the futility of appeasement against the Nazis. I loved how Cooper uses Sophia and her family's drive to lay Montmaray's accusation of German aggression before the League of Nations as a reflection of Nazi aggression in the Sudetenland and Czechoslovakia. If those countries felt alone and ignored, how much more so an island kingdom whose population couldn't lay claim to fifty people? Through the FitzOsborne passion for justice Cooper reflects what it must have felt like to be that lone voice, speaking truth to power in a world determined to maintain the status quo.

Cooper once again peoples Sophia's world with real-life historical characters, proving to be a master at blending fact with well-constructed fiction. I loved seeing the British fascist leader Oswald Mosley through Veronica's horrified, indignant response. And the introduction of the Kennedys and their daughter Kick, future Marchioness of Hartington, as Sophia's friend was particularly well-done (with even a nod to JFK's womanizing ways via Veronica). Like its predecessor, The FitzOsbornes in Exile is a rare treat for historical fiction loves, a heady blend of fact and lovably eccentric characters in a well-drawn world. Cooper is a master at balancing coming-of-age angst with biting social and historical commentary -- an addictive combination that leaves me eager for the third installment of the Montmaray Journals, do to release in October.
Posted by Unknown at 2:31 PM

Oooh, I'm so glad there are more books! Hurray! I bought the first one on Amazon after your review (the hardcover book was something like $6!) I havent finished it because I wanted to read Laura Frantz's book, but I am looking forward to finishing it! Thanks for the recommendation!~

Sounds like a book that I would love to read!

@Heather - Oh I can't wait to hear what you think of the first book! $6 is a great bargain!

@Mrs. Pederson - I have fallen in love with this series -- I hope you get the chance to try it! :)