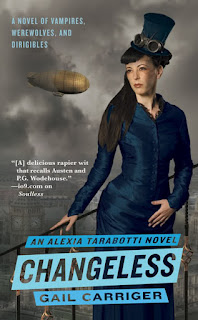 Alexia Tarabotti, the Lady Woolsey, awakens in the wee hours of the mid-afternoon to find her husband, who should be decently asleep like any normal werewolf, yelling at the top of his lungs. Then he disappears - leaving her to deal with a regiment of supernatural soldiers encamped on her doorstep, a plethora of exorcised ghosts, and an angry Queen Victoria.

But Alexia is armed with her trusty parasol, the latest fashions, and an arsenal of biting civility. Even when her investigations take her to Scotland, the backwater of ugly waistcoats, she is prepared: upending werewolf pack dynamics as only the soulless can.

Alexia Maccon, nee Tarabotti, has left the "scandal" of her bluestocking spinsterhood behind for scandal of a deliciously different sort. Her marriage to Conall Maccon, Earl of Woolsey, werewolf, and head of BUR (Bureau of Unnatural Registry), set the gossipping tongues of London's social scene aflame. And her new position as muhjah to Queen Victoria -- the preternatural or soulless seat on the queen's Shadow Council for supernatural affairs -- keeps her on the cutting edge of vampire-werewolf-human relations and policy. But a mere three months into her marriage, Conall abandons her for Scotland and his former pack's stomping grounds with nary a word of explanation, and Alexia determines to follow. Her husband may be supernatural, and she may be soulless, but this is simply not the way to make a marriage work. When news breaks that a literal plague of humanization is sweeping from London to Scotland, leaving supernaturals human and vulnerable, Alexia's curiousity is more than piqued -- as the only member of the Shadow Council immune to the "plague's" affects, she is tasked with uncovering its source. The stakes are high as Alexia wends her way to Scotland (via dirigible), coping with mysterious Frenchwomen, lovelorn best friends, recalcitrant werewolves, and unknown assassins. With the survival of the empire and her young marriage at stake, Alexia's considerable intellect and propensity for parasol-related weaponry face its greatest challenge yet -- the very survival of those supernaturals who are wired to distrust a soulless...

I thoroughly enjoyed Soulless, Carriger's introduction to Alexia and Conall's world, but oh my word I think its sequel is even better. Marriage hasn't dimmed Alexia and Conall's predisposition for arguing and teasing, in the best Darcy and Elizabeth tradition, and the sparks continue to fly post-nuptials. If anything, the twist of having Alexia adjust to her role of Alpha female for the Woolsey pack adds spice to the relationship, since certain wolfish habits -- like grooming and table manners -- are a constant source of trial when met with Alexia's very proper upbringing. I love Carriger's exploration of both Conall's and Alexia's pasts. Conall's history is particularly interesting since he has a good two centuries of life on Alexia, and Carriger takes full advantage of his trip to Scotland to explore his prickly past history with the Kingair pack and his long-estranged relations. For her part Alexia's position as an Alpha pack female and muhjah to the queen widens her circle of supernatural acquaintances, many of whom knew her long-dead (but apparently infamous and promiscuous) father. Carriger is clearly poised to take her time developing Alexia's antecedents and their impact on her position as one of England's few registered preternaturals, but the hints she drops in this installment of the saga are tantalizing, leaving me eager to see how Alexia's history and role in current supernatural affairs progress throughout subsequent volumes.

The delightful, albeit somewhat one-dimensional characters first introduced in Soulless make their encore and oft-times more successful appearances in the pages of this sequel. Alexia's best friend, Ivy of the horrendous hats, is if possible sillier than ever, but I thoroughly enjoyed her on-again, off-again romance with Conall's werewolf-in-training valet, Tunstell. Even better I loved the reappearance of the flamboyant rove vampire, Lord Akeldama, whose propensity for spying introduces the aethographic transmitter, a replacement for the "troublesome" telegraph, a highly convoluted piece of steampunk technology that figures significantly in Alexia's investigations. The humanization threat even makes unlikely allies of vampires and werewolves, and the cooperation between Akeldama's favorite drone, Biffy, and the Woolsey Beta, the deliciously enigmatic Professor Lyall, is absolutely hilarious.

Where the plot of its predecessor was meandering but nonetheless an enjoyable trip, its sequel is more focused, the plotline more linear and well-developed. There is still plenty of humor, hijinks, and romantic sparks, but Carriger's sophomore effort feels more focused and polished. Alexia is altogether more assertive and sure of herself (though her alleged "susceptibility" to Madame Lefoux felt forced and contrived), and given the killer cliffhanger at the end of this book those are qualities that will stand her in good stead. The cliffhanger -- gah! It BROKE MY HEART. While far from flawless this series is on a roll and I cannot wait to see where Carriger takes Alexia and Conall next. Imaginative world-building, clever, quirky characters and a ton of humor mark Changeless as a page-turning entry in a highly addictive series.
Posted by Unknown at 9:57 AM

Thanks for the review! I've read the first one but somehow never got around to the rest of the series. You've renewed my interest, so I'll have to try it. :)

@Kara - I hope you enjoy it! I am SO addicted to this series!

I read the first based on your review, and enjoyed it, but it was (as you politely warned) "spicy," and as I'm writing for a younger set (along with not being interested inthat myself) I'm curious if you're aware of any other entertaining steampunk that I could explore.

An acquaintance insists that my latest novel ought to be Steampunk, and I see the advantages, but I'm not well-read or connected to the genre.