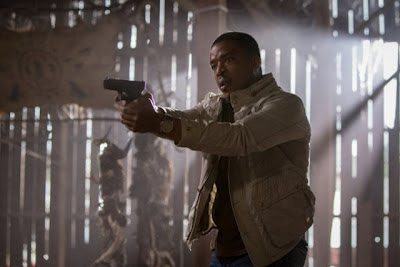 This episode of Grimm offered a bit of a reprieve from the two-part season opener's intense OHMYGOSHNICK'SLIFEISFALLINGAPARTATTHESEAMS tone by focusing on Hank (Russell Hornsby) and his long-simmering, troubled reaction to the unexplained glimpse of the Wesen world that he received at the end of the show's first season. Hank has been a bit of an under-used character of late, in my opinion, which is a shame because while he isn't my favorite I do think he's extraordinarily likeable. So I have high hopes for his character arc from this point forward.

This storyline has only a very loose fairy-tale tie in. The episode opens with the quote "Then she began to weep bitterly, and said, ‘What can a poor girl like me do now?’" which is from the Brothers Grimm tale "The Old Woman in the Wood." If you read the Wikipedia summary of that story, it becomes abundantly clear that this script has NOTHING whatsoever to do with the quote's source material, instead opting to lift the relevant quote because of the script's "girl in peril" theme. This hour had very little to do with fairy tales, instead serving as a vehicle for exposing Hank to the full truth of the Wesen world. While I like how that ultimate purpose of the hour played out, I was a bit disappointed (and frankly disgusted) by the whole idea behind this week's investigation -- perhaps that is because in part, it didn't have better, stronger source material on which to rely? ANYWAYS...let's discuss. :)

Carly (Maddie Hasson from the short-lived Fox series The Finder), a high school student, and her father Jarold (Mark Pelligrino) are enjoying a quiet evening at home -- by all appearances, the very definition of average. But their home is being watched, as we see a shady character pull up outside who transforms into a Coyotl, which if appearances are any indication are this show's equivalent of thuggish, countrified hicks. *rollseyes* When Carly heads to her bedroom, she is horrified to discover two of the creatures within, intent on kidnapping her. (Say it with me: ICK!)

Meanwhile, Nick (David Giuntoli) is still quite understandably distraught over the fact that Juliette (Bitsie Tulloch) remembers everything about her pre-coma life EXCEPT him -- she only knows him as the police officer who brought her to the hospital (ouch). Now, I totally get WHY Nick brings their laptop to the hospital, loaded with photos of Juliette and him in happier times, but I have to question the advisability of this in a real amnesia situation -- it seems that the emotional overload the photos could trigger, unsupervised, could be more detrimental than helpful. But this is television, what am I thinking? :P Irregardless, Juliette seems remarkably calm about the whole "I-can't-remember-my-boyfriend" thing -- perhaps, even though she doesn't know she's the victim of Adalind's spell, there's a part of her that can sense something is "off," something is blocking her memories of Nick which overwhelming evidence prove should be there. One of my favorite scenes in this episode is when Nick brings Monroe (Silas Weir Mitchell) to the hospital and both men are SHOCKED when Juliette warmly greets Monroe, and has no idea the two men have a history. The look on Monroe's face was priceless! One gets the impression he really does not like being caught in the middle of "couple problems," nevermind the cause. *wink* 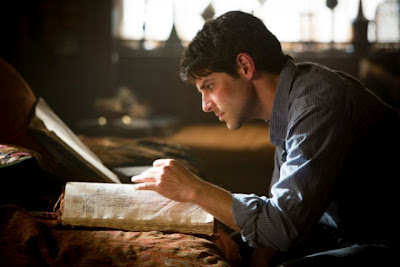 Hank has become increasingly bothered by his monstrous visions and dreams, so much so that he's sought the help of a psychiatrist. He's SO on edge he scares his doctor -- it's clear that at this point he thinks he's teetering on the edge of madness. (Side note: I'm sort of hoping that his doctor makes a return appearance where it's revealed that she's a Wesen -- there was a "pause" in her manner when Hank let slip a comment about seeing people "change." Thoughts?) When he returns to the station he walks in on a meeting between Renard (Sasha Roiz) and Nick, who've mutually agreed that they need to investigate the missing Adalind as a possible suspect in her mother's recent murder (poor Addy...I can't decide if she'd rather be found by Nick or Renard! LOL!). In a conversation shortly following with Nick, Hank expresses his concerns about his ability to do his job -- and you can see that it is driving Nick UP THE WALL that he knows what's tormenting Hank, but he isn't free to discuss it.

Before Hank and Nick can talk further, Jarold arrives at the station -- it turns out that he and Hank are old school friends, and Carly is even Hank's goddaughter. Jarold is out of his mind with worry over his daughter's disappearance, and during the interview with Hank and Nick briefly morphs into a Coyotl -- and the pieces begin to fall into place as to why Carly was snatched to begin with. I LOVE THIS. The show hasn't really explored the idea that those "regular" humans within Nick's circle of friends must know Wesen -- and that being the case, how are those interactions handled? In that respect Jarold is perhaps the most grounded Wesen Nick has met to date -- first of all he has a sense of perspective, in that he doesn't let Nick's status as a Grimm freak him out more than the fact that his daughter is missing. It also becomes clear really quickly that unlike his fellow Coyotls, Jarold has A FRIGGIN' MORAL COMPASS -- disgusted with his pack's lifestyle he and his wife made the decision years earlier to flout tradition and raise their family away from the pack's pernicious influence (good call!). As the investigation progresses, Jarold gradually recognizes the possibility that his extended family members could be out for revenge, and it just so happens SOME OF THEM ARE IN PORTLAND -- though he conveniently glosses over the years-long "blood feud" aspect of pack living for Hank's benefit. :P

Now, I'm really not going to go into the mechanics of the reason Carly was abducted, because honestly that whole aspect of the storyline was sensationalistic even by this show's standards. *rollseyes* And it did absolutely nothing for me except, well, make me feel absolutely revolted. That said, I did appreciate that the show kept Carly's identity as a Coyotl a secret until the end of the episode -- she doesn't transform or seem anything other than horrified by her kidnappers, and that unknown factor added extra tension to those scenes (because let's face it, the idea of the Coyotl "fertility matrix" is horrible enough FOR A COYOTL, but if you weren't one I have to think the ritualistic aspect the whole mess would, perhaps, be even more terrifying). (Side note: Monroe's little "facts of life" speech to Nick in the trailer during their research meeting was HILARIOUS. Also, love the fact that Monroe was "unavailable" because of the whole new moon thing... *wink*) 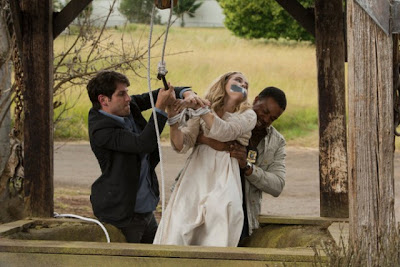 So, one thing leads to another and Nick and Hank, along with Jarold, follow their investigation into Jarold's shady relatives to an old farm, which ends up in a stand-off/fight that simultaneously managed to remind me of Deliverance and The Twilight Zone. :P All that aside, the best part of this sequence is how the truth of the Wesen world and Nick's role in it are finally revealed to Hank. After rescuing Carly from where her nasty relatives had stashed her IN A WELL, she recognizes Nick as a Grimm and morphs into a Coyotl, which COMPLETELY freaks Hank out. Two elements are in play here, both of which I think were needed to make Hank's intiation into the Grimm world realistic and believable. 1) There's the undeniable creature sighting, only this time it's no random stranger or suspect, it's someone Hank has known for years -- a girl he'd watched grow up. There's a level of history and experience there that Hank has to take into consideration. 2) Nick, his trusted partner, steps in to prevent Hank from shooting Carly and by acknowledging that he can see her her Coyotl form, thus quelling Hank's fears that he's gone completely nuts.

I suspect that subsequent episodes will deal with Hank's newfound knowledge of Wesens in a more substantial manner -- obviously knowing these creatures are out there, but not being able to see them like Nick can, being limited to glimpses of when they choose to reveal themselves or lose control -- one would think that would foster a TON of paranoia. *wink* But for now, I loved the fact that Hank's ridiculously okay with everything because HE'S NOT CRAZY, and if he is, HE HAS COMPANY. So either option works for him at this point. :P

The resolution of the Coyotl stand-off is pretty satisfying as Hayden, the leader of the pack (played by John Pyper-Ferguson, whom I much prefer to watch as baddie Stanton Parish in the SyFy series Alphas) is apparently so full of himself he can't "sense" that Nick is a Grimm. This allows Nick and Hank to set a trap for the Coyotl thugs, and Hank, prepared for the transformation, doesn't blink as he drops Hayden with a well-executed punch. :) While the lack of a fairy tale tie-in to this week's storyline was rather disappointing, I liked this episode for how it brought Hank into Nick's world -- I thought the process was fairly believable all things considered. *wink* So while it's nice to see Nick's circle of Grimm-related allies widening to include Hank, that barely makes an impact balancing out the heartbreak of bringing Juliette home from the hospital, seeing her so visibly ill at ease in Nick's presence. *SOBS* Feel free to chime in with your thoughts on this episode! I'm going to do my best to catch up with a post on episode four (which was STELLAR) in the next few days...
Posted by Unknown at 7:21 PM

Aw, you didn't like this episode? I really enjoyed it, even though it was pretty sensational. I agree, Hank's been kind of neglected lately, and I love his and Nick's relationship, so I'm happy he's now in the fold. :) My mom thought the name Coyotl was HILARIOUS, by the way, she kept giggling every time someone said it.

Poor Nick. To be fair, he is really neglecting Juliet right now (not that I blame him). I predict Nick will be moving in with Hank in a few weeks.

@Tasha - Yeah, I was just a little lukewarm about this ep. I mean I didn't HATE it -- I don't think I'm capable of that as far as this show is concerned (ha!) -- but it just didn't "hook" me like most other eps do. I am, however, quite happy with how they handled the Hank situation. It would've felt anticlimatic to have Nick tell him everything -- I liked the fact that Wesen Hank had known for years were involved. Seemed more credible that way. ;)

That's an idea...Nick moving in with Hank? Or Monroe? Because the latter would be HILARIOUS. ;)