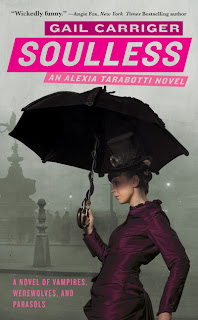 Alexia Tarabotti is laboring under a great many social tribulations. First, she has no soul. Second, she's a spinster whose father is both Italian and dead. Third, she was rudely attacked by a vampire, breaking all standards of social etiquette.


Where to go from there? From bad to worse apparently, for Alexia accidentally kills the vampire -- and then the appalling Lord Maccon (loud, messy, gorgeous, and werewolf) is sent by Queen Victoria to investigate.

With unexpected vampires appearing and expected vampires disappearing, everyone seems to believe Alexia responsible. Can she figure out what is actually happening to London's high society? Will her soulless ability to negate supernatural powers prove useful or just plain embarrassing? Finally, who is the real enemy, and do they have treacle tart?

SOULLESS is a comedy of manners set in Victorian London: full of werewolves, vampires, dirigibles, and tea-drinking.

Alexia Tarabotti is an anomaly in Victorian London in more ways than one. Her father (dead) was an Italian who gifted her with the questionable attributes of a dusky skin tone (pale is all the rage) and unfashionably generous curves. At twenty-six years she is considered firmly "on the shelf," the bane of her society-obsessed mother and two half-sisters' existence. As if her ancestry, age, and intellectually-bent mind weren't enough, she's also the only registered preternatural in the London area -- one of the soulless, capable of neutralizing the abilities of any supernatural with whom she comes in contact. Preternaturals are extremely rare and viewed with suspicion by the supernatural community, particularly those of the vampire persuasion, forcing Alexia to keep her ability a closely-guarded secret. Resigned to coping with her lot in life Alexia contents herself with books and intellectual pursuits, until a rogue rove vampire attacks her unprovoked and in the ensuing fight is killed. The attack brings Alexia to the attention of Lord Conall Maccon, the Alpha werewolf in charge of the local BUR office (Bureau of Unnatural Registry, the division of Queen Victoria's Civil Service that oversees all supernatural matters). Alexia likes nothing more than driving the grouchy Conall absolutely mad, but as the investigation proceeds the pair uncover chilling evidence of rove vampire and werewolf disappearances as well as more ominously the appearance of unsanctioned, unregistered, and barely functioning supernaturals. Threatened by malevolent forces, Alexia and Conall find themselves in a race to save the supernatural community from a vicious attack -- and perhaps the possibility of romance, if only they can stop driving each other insane first.

After seeing this book around the blogosphere for years I finally decided to give Carriger a try and I'm so glad I did. This book was just what I needed -- something outside my reading norm, light, fluffy, and wholly, deliciously addictive. The Victorian England that Carriger has reimagined reminded me of the television show Torchwood -- appropriate since the Torchwood Institute was conceived under Victoria's reign. Only Alexia's world, every bit as well-crafted, doesn't take itself quite so seriously -- Carriger manages to balance the suspense and danger of her storyline with a healthy dose of snarky, quotable, laugh-out-loud humor and sarcasm. Supernaturals may be "sanctioned," but there's a wonderfully open acknowledgement that, for example, a werewolf typically has appalling personal habits, nevermind that he might be a nobleman. This is a fantastic introduction to a world where supernaturals live openly -- vampires long acknowledged for their political prowess and fashion sense, while werewolves hold sway in military matters. The building blocks of Carriger's Victorian London make sense, leaving one at liberty to lose yourself in the story and characters and enjoy the ride.

I absolutely adored the romance between Conall and Alexia. It's like Darcy and Elizabeth in Pride and Prejudice, but on steroids. Instead of the initial "meet" and a slow-burning attraction, Carriger plants the reader in the middle of Alexia and Conall's confrontation-prone acquaintance. I adored their bickering and their inability to see the truth of their mutal attraction -- hampered quite naturally by Alexia's soulless state and Conall's instinctual, wolf-pack driven worldview. I love the fact that Conall is every inch an Alpha hero  without being a total boor, and Alexia, with her unemotional outlook and savvy intellect is his perfect match. (Side note: Conservative readers keep in mind that this read falls at the spicier end of the spectrum.) I do hope that as the series progresses there is more focus on Alexia's strengths -- midway through the novel she pivots from seeming independence to zero self-worth (her family is horrible in that respect), a somewhat jarring inconsistency. Conall and Alexia are supported by a host of colorful, if sometimes one-dimensional characters. But while the vampire Lord Akeldama is relentlessly flamboyant until the final fourth of the novel, and Lyall, Conall's Beta is best known for being mysterious and capable, there's sufficient heart and the promise of depth behind Carriger's creations that I'm hopeful for stronger, more full-rounded characterizations as the series progresses.

Soulless is a ridiculously fun read and a promising beginning to a series and a world I'm looking forward to revisiting. Carriger's imaginative world-building and sense of humor are her strongest assets, and I have high hopes that characterizations are more fully-fleshed out and developed in further installments. With sharper-drawn, more consistent character-crafting and some polishing on point-of-view and plotting, I think Carriger has a ton of potential. Regardless, the humor and sheer fun within the pages of Soulless have left me eager to read the sequel.

Hey, I read this. :) I did like the romance, but the rest of the book felt like it was going all over the place. I have yet to enjoy a steampunk novel, though, so maybe that's my problem.

@Tasha - Oh you are so right, this book IS all over the place (I gave it 3.5 out of 5 stars), but I enjoyed the wild and crazy ride. Honestly I haven't read much if any steampunk...this felt more like a fantasy to me? I've always assumed steampunk was more "tech" driven...but maybe I'm wrong?

I don't know much about steampumk myself. But this book was a LOT of fun! I laughed a great deal. By the way Ruth, this is my first time posting but I've been lurking around your blog for quite some time. I just wanted to tell you how much I enjoy your posts. You've made several book recommendations that have totally convinced me to read them. So thanks! And keep up the great work! :)

@Kara - Yay, I'm so glad you enjoyed this book too! A little preview, I just finished the sequel over my lunch break and I think I liked it ever more than this one! Review coming soon. :) And thank you so much for your support and kind words, that means a lot! :)