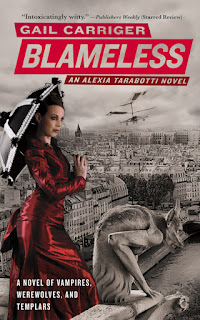 Quitting her husband's house and moving back in with her horrible family, Lady Maccon becomes the scandal of the London season.

Queen Victoria dismisses her from the Shadow Council, and the only person who can explain anything, Lord Akeldama, unexpectedly leaves town. To top it all off, Alexia is attacked by homicidal mechanical ladybugs, indicating, as only ladybugs can, the fact that all of London's vampires are now very much interested in seeing Alexia quite thoroughly dead.

While Lord Maccon elects to get progressively more inebriated and Professor Lyall desperately tries to hold the Woolsey werewolf pack together, Alexia flees England for Italy in search of the mysterious Templars. Only they know enough about the preternatural to explain her increasingly inconvenient condition, but they may be worse than the vampires -- and they're armed with pesto.

The revelation that Alexia Maccon, a soulless, was pregnant transformed her life from one of newlywed bliss to heartbreak and a struggle for her very survival. Rejected by her husband and accused of infidelity -- for it has long been accepted as unalterable fact that an immortal cannot produce children -- Alexia returns to her mother's home to face societal and familial censure for her apparent indiscretion. But ever-practical even in the midst of heartbreak and emotional upheaval, Alexia determines to prove her faithfulness and clear her name -- though Conall would have to do an awful lot of grovelling before she'd consider taking him back. The key lies in discovering the truth about this impossible child she carries within her (or "infant inconvenience" as she takes to calling it), the child that shouldn't be, the one whose very existence threatens both their lives. For many among London's supernatural set view Alexia's pregnancy as a threat, one they'll go to any length to eliminate. Facing danger from every quarter (including homicidal mechanical ladybugs!) and bereft of the protection once offered by the Woolsey Pack, Alexia and a handful of trusted companions flee London for the continent and her father's old home of Templar-controlled Italy. But the Templars' attitude towards supernaturals could prove to be the greatest threat to Alexia's unborn child, requiring all of that formidable's smarts and parasol-wielding skills in order to survive.

Blameless is a marked change of pace for the Parasol Protectorate series, as Conall and Alexia spend a good ninety percent of the novel separated by large parts of the European continent. As such the spark and fire that made Soulless and Changeless such rollicking good reads is largely absent, replaced by an adventure with the pace and scope of an Indiana Jones film. And the results are decidedly mixed. This novel opens shortly after the heartbreaking finale of Changeless, when Alexia's impossible pregnancy is discovered and Conall subsequently accuses her of adultery, because established science has long held that supernaturals, who have forfeited their humanity for immortality, cannot procreate. Now, while it is absolutely APPALLING that Alexia is convicted without the benefit of a trial, I can understand Carriger's choice to temporarily separate the newlyweds -- after all, in her steampunk universe science, particularly to a soulless like Alexia, would be something akin to a god, infallible and in Alexia's case, damning. So perhaps I'm a bit more forgiving of Conall than I should be, since Carriger makes it so patently obvious that the earl is completely miserable without Alexia.

Chapters roughly alternate between London and Alexia's continental European travels. While I love Alexia's no-nonsense character and independent spirit -- in particular the delicious irony that although she is soulless, she is far from heartless as her ruptured marriage and pregnancy prove -- I found the travelogue chapters a bit of a slow-go when compared to the London-set action. The Maccons' separation gives Carriger an opportunity to really flesh out her supporting characters, and Alexia's best friend Ivy and the Woolsey Beta Professor Lyall fair particularly well. Newly-married to her struggling actor, Ivy has lost none of her joie de vivre and when Alexia is forced to decamp from London Ivy gets the opportunity to reveal some savvy spying skills lurking beneath her air-head demeanor. And Lyall -- he is by far my favorite secondary character, and I loved how his patience is thoroughly tested by Conall's heartbreak (the Alpha drinks ALL the formaldehyde containing the Professor's scientific experiments!), as he is left to keep the Pack in-line while attempting to prove Alexia's innocence (all in a bid to restore normalcy to Woolsey).

Despite the occasionally sluggish chapter due to the absence of sparks between Alexia and Conall, Blameless is a rollicking, two-pronged adventure that sees supernatural affairs reach a new crisis in London and abroad. The breach between Alexia and her recalcitrant husband, while a tad forced and far too long in duration and then too quickly resolved, gives Carriger an opportunity to flesh out her steampunk vision of Victorian England and the cast of colorful characters that people Alexia's world. Carriger's plotting is solid, her pacing (mostly) steady, and her addictive wit present throughout Blameless-- and the promise of far-reaching ramifications for the supernaturals thanks to Alexia's forthcoming child? Too delicious to resist!
Posted by Unknown at 2:17 PM