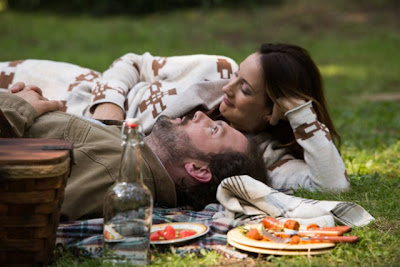 This episode of Grimm is, without a doubt, one of the best things ever. I mean just look at that picture of Monroe and Rosalee? Could they BE any more adorable?? I really could just leave things at that, because Monroe wins this episode hands down, but let's discuss. :) The episode opens with the ominous words "Death stood behind him, and said, 'follow me, the hour of your departure from this world has come,'" from the Brothers Grimm tale "Death's Messengers." Rather than mirror the original tale (which involves a young man who saves Death from a beating, extracting a promise that Death would warn him when the time for his own passing has come), this episode uses the quote as an ominous harbinger of death coming to Portland -- and perhaps, given recent revelations about Renard's identity and activities, in more ways than one.

Taking the "death" theme and running with it, the episode opens with a Portland Parks & Recreation employee, innocently sitting at a stop light, getting violently rear-ended. When he exits his truck to investigate, he's horrified to discover that the other driver is covered in bloody, scab-like growths, doing his level best impression of a member of the walking dead. This illness -- ICK. It looked like some sort of disgusting fungus, no? Gilko (Kevin Schinick) is understandably horrified, which turns quickly to terror when the second driver attacks him, provoking Gilko to transform into his Wesen identity -- a Stangebar, essentially the Wesen equivalent of a porcupine. He manages to escape and call 911, while the second driver runs into an office building -- a call that conveniently goes straight to Portland PD's Wesen experts. *wink*

Now that Hank (Russell Hornsby) is aware of the existence of the Wesen world, he's eager for further info, and his relief at NOT being crazy seems to be transitioning into a barely-repressed freakout that Wesen exist at all. I'm thinking it is only a matter of time before Hank's lack of a filter when it comes to Nick's unique abilities gets both of them in trouble. Nick (David Giuntoli), to his credit, appears to possess a nearly-unlimited reservoir of patience when it comes to explaining the Grimm world to Hank -- and that really isn't all that surprising, when one considers that his personal life has been in such upheaval with Juliette's Nick-specific amnesia. When the pair arrive at the scene of the zombie-like attack, they are forced to shoot the clearly ill attacker, but not before Nick sees him transform into a Reinigen (rat-like creature). This illness and its effects are weird even by Nick's Grimm standards... 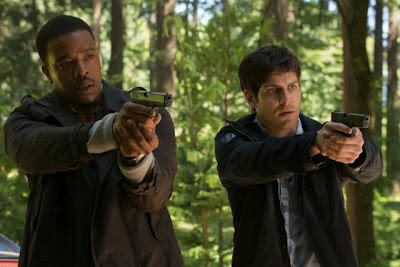 Cut to Monroe (Silas Weir Mitchell), who is looking adorably domestic sporting an apron while he oils a wooden picnic hamper. Seriously, could the man be any more the antithesis of a big bad wolf? *wink* He receives a surprise call from Juliette (Bitsie Tulloch), who is trying to figure out why she can remember everything about her life pre-coma except Nick. This is getting heartbreaking, people! Juliette even remembers Bud (Danny Bruno), the Eisbiber refrigerator repairman and his freakout, and invites him over for coffee. This leads to a hilariously awkward moment where he assumes Juliette knows that Nick is a Grimm, and has to cover for his slip of the tongue with a transparently bad explanation about how he just means "Nick is a good cop" (HA!!). More than ever I'm wondering about the ramifications of Adalind's spell, and if Juliette and Renard would have some sort of awkward moment should they encounter each other post-curse-breaking kiss. Thoughts?

Speaking of Renard, he receives a phone call from a relation (cousin? who cares, any excuse for Sasha Roiz to speak French!) who warns him that a Nucklavee, which is apparently a horse-like assassin, is heading to Portland. Interestingly enough, Renard and his relative are apparently operating WITHOUT the sanction of "the family." Given the recent revelations about Renard's hexenbiest blood, I'm thinking it is increasingly possible that Renard is attempting to set up a coup of some sort...the only question is, to what end?

But let's set aside issues like assassins and amnesiac girlfriends for a moment, and talk about Monroe and Rosalee (Bree Turner). Because they rocked this episode. Monroe asks Rosalee on a picnic, but only if she is into that sort of thing (seriously, COULD HE BE ANY MORE PERFECT??), and of course she says yes, and his eyes light up, and I nearly DIE OF HAPPINESS. So they head off on their little jaunt through the woods to the perfect picnic locale, and things couldn't be more idyllic -- I half expected them to start humming and skipping, hand-in-hand, through the trees at one point. Things are just starting to get REALLY interesting, as they both comment that they don't want to rush into a relationship, and then THEY ALMOST KISS! Only it is interrupted by Gilko who is in the throes of the Wesen illness which he apparently caught from his attacker. GAH!!!

Rosalee and Monroe return to the spice shop and all seems well -- extraordinarily well, by Monroe's standards, as the encounter seems to have made Rosalee rather *ahem* amorously inclined. :) I love how flustered he gets, and still manages to be a gentleman. Nick, of course, picks this moment to call with news from his research jaunt to Aunt Marie's trailer -- he thinks the Wesen disease is an outbreak of Fluvus Pestilentia, also known as the Yellow Plague, which handily explains why regular humans haven't been infected. Unfortunately for Monroe and Rosalee, the first symptom of infection is a spike in libido, followed by a rapid crash. There is an antidote, and fortunately Monroe is in the spice shop containing all the necessary ingredients -- but just when he needs Rosalee's expertise most, she collapses, and Monroe is left to SAVE HIS WOULD-BE LADY LOVE! I can hardly stand the DRAMA!! 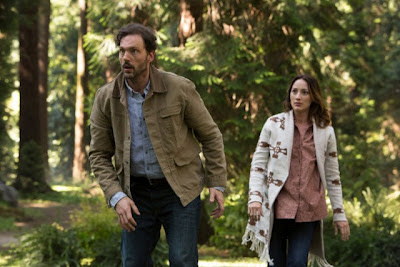 Here's the thing I love about Monroe (well, one of many things if I'm being honest here)...I love that he is such a gentleman, so considerate, basically the antithesis of what you'd expect from a blutbad. Given the werewolf thing alone you'd think he'd be all Alpha about a potential relationship, but he isn't -- he's more unsure of himself than Rosalee is. And that is ADORABLE. Gah! I MELT, I tell you! So while Monroe is freaking out that his wannabe girlfriend might be dying of the PLAGUE, Nick and Hank show up at the shop with the Parks & Rec employee, out of his head delirious and near death. Oh! I almost forgot...earlier in the episode when Monroe tells Nick about his conversation with Juliette, Nick drops the little bomb that Hank now knows all about the Wesen world. I LOVE how Monroe acts relatively calm about it (after a comment about having a "coming out" party) and then completely FREAKS after Nick leaves.

So, what's interesting about the race to save Rosalee scene is how it forces Hank and Monroe to work together (the former not yet being read in on the fact that Monroe is the very Wesen who started his whole freakout). Monroe (of course) rises to the occasion and mixes the potion, which they first test on Gilko -- and then, when it comes time to administer the dose to Rosalee, his hands are shaking so badly Hank steps in. I thought that was super sweet. :) (Also, the moment when Nick brings Rosalee back into the shop after her escape, during which she attempted to knife him with a wicked-looking pair of scissors), how cute was Monroe freaking out thinking she was dead? I say cute because as a viewer I can rest in the comforting knowledge that there was no real danger of Nick going all Grimm where Rosalee is concerned. I just love seeing Monroe so flustered by his crush. :)

Monroe as Rosalee's knight in shining armor? Yeah this ep is one for the record books. *wink* Their final moments of this episode made me SO HAPPY, where she's all "did we...kiss?" and he's all "welll...but you were so sick" and she's all "I don't think it was just the PLAGUE TALKING." :) They are so cute!

Looking forward, Grimm returns with a brand-new episode this Friday! I can't wait to see what trouble this mysterious stranger -- whose pending arrival even seemed to rattle Renard just a bit! -- brings into Nick's life. Also of interest -- the news recently broke that Claire Coffee, who plays the ex-hexenbiest Adalind, has been promoted to series regular. I'm SO anxious to see what her pending return means for the show. She has a lot to deal with  what with the loss of her powers and her mother's death! Did I miss anything? :)

I can't WAIT until Juliette and *Sean* Renard come face to face. I just know there will be some consequence of his being the one to kiss her.

Hope you are still enjoying this the same as last season, Ruth! :-)

I have a question for you: How would you compare this to 'Once'? My impression of it is that it's much darker than the fairy-tale counterpart but my local video store does have it so I wondered about renting it and when I asked the clerk, she hadn't seen it yet.

@Kaye - Oh I KNOW. I thought it was interesting when he asked Nick how Juliette was doing...I keep thinking he's got to still be dealing with the long-term effects of the "pure heart" potion!

@Rissi - Oh absolutely! Grimm is darker, but chock-full of humor and heart. Visually, especially, the "monsters" are scarier...and there is some violence/blood...more in keeping with the police procedural format. But the humor and the characters! I just love them. :)