Inspector Lewis: And the Moonbeams Kiss the Sea 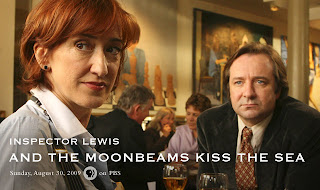 I know I originally claimed that I wouldn't be blogging about series 2 of Inspector Lewis, but is anyone shocked that I'm caving? It is Masterpiece Mystery, after all. :-) The first episode of this new batch of Lewis mysteries aired this past Sunday, entitled And the Moonbeams Kiss the Sea. Here's the summary of the episode from the PBS website:
A body is in the library, but not just any library. A man is dead in the basement of Oxford's Bodleian Library, the first murder there in 500 years. The maintenance worker had a curious interest in old books and a more contemporary proclivity for gambling. Lewis and Hathaway's investigation takes them into the secrets and contrasts of Oxford life — the closed world of gambling support groups and the rarified arena of arts and literature. But when the murders start to stack up like books in the Bodleian and the surreal link seems to be the poet Shelley, Lewis and Hathaway scramble to get an education and catch a killer.
As a quick refresher, Inspector Lewis (played by Keven Whately) began as the "sidekick" to another famous Masterpiece Mystery detective - Inspector Morse. During the Morse years, Lewis was a Detective Sergeant, and after that series concluded, Lewis was promoted to Inspector (and given his own show). You can read about Lewis's history on Wikipedia, from what I can tell the page is a fairly accurate history of the character. I think I only ever saw one or two Morse episodes, so my experience with this show really began with the first Lewis mystery which aired in 2006. In that pilot episode, Lewis was given his own sidekick, if you will - Detective Sergeant Hathaway, played by Laurence Fox.
The Lewis mysteries have a very unique feel to me. Set in the rarified, academic atmosphere of Oxford, murder and mayhem seem like such alien things to find in such a seemingly idyllic place. Whately does an excellent job of giving Lewis a sort of "fish out of water" feel to the character. Lewis is very good at his job, very dedicated, but he doesn't quite fit in to the world of upper class academia. Hathaway is the perfect foil for Lewis's more down-to-earth approach to crime. He's extremely quiet and intelligent, with a wonderfully dry sense of humor. Watching the two of them interact is probably the most fascinating aspect of the series.

Speaking of Hathaway, this character is probably one of my favorite Laurence Fox roles. Fox has quite the acting pedigree - he's the son of actor James Fox, and has appeared in everything from Miss Marple and Jericho mysteries to feature films like Elizabeth: The Golden Age and Becoming Jane. I really enjoyed watching Hathaway's character in this episode - Fox gets to show how intuitive he can be, and during his investigations he manages to balance that with a nice touch of compassion - particularly with how he interacts with one of the suspects, a student named Philip (played by Tom Riley).

I was quite pleased to discover Tom Riley appears in this episode - lately he's probably most well known as Wickham from Lost in Austen, but looking at his IMDB page I'm reminded he also made appearances in Poirot and Marple episodes. Riley's turn as Wickham is so memorable in my opinion that it's colored my view of Riley as an actor - in my mind, he's always playing characters with a rakish bent. So his performance as Philip is striking because it's the complete opposite of what I'm "used" to seeing from the actor. The character of Philip is brilliant, somewhat socially awkward, and an obsessive artist with a photographic memory - described as likely autistic to some extent. Riley displays this great ability to be fragile in Moonbeams - this guy's got range, and he's definitely an actor to watch.
It's also worth noting that two of the students made previous appearances on Masterpiece programs this year. Jeany Spark, who played the role of Jane Evans, was previously seen as Mercy in Tess of the d'Urbervilles on Masterpiece Classic followed by her best role yet (in my view) as Kenneth Branagh's daughter Linda in the Wallander mysteries. Emily Beecham, who played the rather cerebral, conniving student Nell Buckley, also appeared with Spark in Tess, playing the role of Retty Priddle, as well as the Miss Marple episode At Bertram's Hotel (which was probably my favorite Marple ep from series 3).
This episode mixes gambling addiction, forgeries, Shelley's poetry, and murder into a fascinating story. I'm quite glad I decided to start Lewis series 2, and I'll definitely be watching the rest of the episodes.
Posted by Unknown at 3:56 PM

I loved this episode. LOVED. And Lawrence Fox can totally be the father of my children. :D

I knew I'd seen the guy who played Philip before, but I never would have recognized him as Wickham. He does have range! That's awesome.