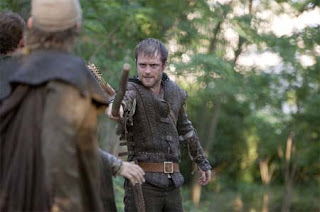 Spoilers!!
Oh Robin Hood, how I love you. :) The third (and sadly, final) season of Robin Hood finally, at long last, began on BBC America this weekend. And it starts off with a bang. Since it's been about a year and a half since season 2 aired over here, how about a quick recap?
When we last left our intrepid band of outlaws/freedom fighters, they had traveled to the Holy Land (apparating Harry Potter-style, apparently, since the journey took no time at all) to save King Richard from yet another attempt on his life spearheaded by the Sheriff (Keith Allen). The world of Robin Hood fandom was set ablaze by the controversial ending to season 2, which saw my favorite baddie in the whole wide world (a.k.a. Sir Guy of Gisborne, a.k.a. RICHARD ARMITAGE!!) go off in self-destruct mode and kill Marian (Lucy Griffiths), after finally (FINALLY!!) realizing that she's been playing him for a fool for two years.
Personally, Marian's death was remarkably anticlimatic. She'd gradually become infected over the course of season 2 with one of the worst cases of TSTL (Too Stupid To Live) syndrome that I've ever seen. And the whole will she choose Robin or will she choose Guy thing had been taken WAY too far. Where Guy was concerned, she was far too blinded by his appeal and feelings for her - she thought she could control him, and failed MISERABLY. Her father never taught her that if you play with fire, you get burned (or stuck in the gut with a sword by an emotionally eviscerated, incredibly good-looking man). The best part of Marian's death was how it allowed Robin (Jonas Armstrong) to emote...that man has beautiful, beautiful eyes. Just sayin'. :) You can read my post on the season 2 finale here.
Fast forward to tonight's episode...strangely enough it takes MUCH longer to journey back to England from the Holy Land than the other way around. Weird, no? And apparently the second the boat docks one must run all the way back to Nottingham in order to avenge the death of one's beloved. (Question: Why did it seem like Guy & the Sheriff had been back in England so much longer than the boys in green? Also, all the running was a little crazy...it reminded me of all the running that occurs in The Two Towers.) Can I just tell you that I LOVED angry, angst-ridden Robin? That was played well, I liked seeing Robin cope - or not, as the case may be - with his grief and anger, and I think, guilt over not being able to save Marian. Over the course of the previous two seasons he's poured so much of himself into the anti-Sheriff crusade, that it's actually a wonder he hasn't reached the breaking point before. But of course, after perhaps realizing that your king is a MORON (seriously, go back and watch the end of season 2 if it's been a while, Richard was written very poorly IMO) and it's cost you the woman you love and are perhaps FINALLY ready to commit to, it's natural that one would have to lash out a bit. This is really the first time that being an outlaw has really cost Robin something near & dear to him - a wake-up call that was probably long overdue.
The man that brings Robin back from the brink is a new addition to the team - Tuck, played by David Harewood. In keeping with the way this show likes to shake up tradition, this incarnation of Tuck definitely isn't a roly-poly, jolly type - this Tuck may still be a priest, but he's a fighter and crusader. Out of all members of the gang, Tuck is being set up as Robin's best equal - how can I say this - mental acuity. I love Little John (Gordon Kennedy), Much (Sam Troughton), and most of all, I love and adore Allan (Joe Armstrong), but excepting perhaps Allan's occasional flashes of brilliance, they are definitely more followers than leaders and planners. I think it's interesting that Tuck, newly returned to England from foreign parts himself, has such a passionate drive to see the Sheriff and Prince John ousted from power - the urgency of his mission seems just a tad contrived for a new arrival, but whatever. Perfect logic has never been this show's strongest suit. ;-)
I absolutely loved this episode's focus on the Robin/Guy conflict. It's hard to find Richard Armitage's equal for playing the tortured soul, and he uses that skill to full effect in this episode. He may have incredibly nasty, greasy hair, but somehow I can look past that and see the tortured soul, know what I mean? *sigh* Not that I in any way condone how he dealt with his relationship problems at the end of season 2, but Marian just didn't get him, did she? Stupid girl. ;-) Guy had some great moments in this episode, from the encounter with Tuck, where he talks of the demons that haunt his dreams, to the moment where he begs Robin to kill him, only to be spared, to perhaps the best moment - where he tells the Sheriff that he FINALLY realizes that he doesn't like him. OMG, is the light dawning?! LOL 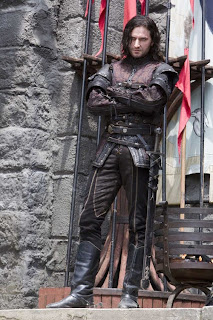 So, by the end of this episode, Robin realizes that he can't not do what it is he does, he can't suddenly deny Robin Hood. For as much as he created the legend the people love, it's an intrinsic part of who he is - and since the people love him enough to risk a massive forest fire with their candle-filled tribute (that cracked me up!) when they think he's dead, well Marian wouldn't want him to let them down, would she? :) Two things I absolutely loved in the ending segment of this episode: 1) the insane giant arrow the Sheriff tries to kill three people with. When will the man realize that elaborate death traps never, ever work? *rolls eyes* LOL! And 2) Robin's grand entrance and heroic speech. I am a total and complete sucker for those moments, they do me in every single time.

Hi Ruth,
My husband and I stumbled onto this episode last night - right when Marian was killed. Huh, I thought?! But your TSTL analysis explains everything:) You have a wonderful blog. It blesses me to read it:)

@Laura - Thanks so much, glad I could be of help! LOL! :) I do so dearly love this show, quirks and all.

Clicked over from Heidenkind's Hideaway - I totally love Robin Hood, too! Unfortunately, we don't get BBC, so I'll have to wait for season 3 on DVD, like I did with the previous two. Sigh.

@Carrie - Thanks so much for the comment! Do you get Comcast? If you have On Demand Robin Hood is available through that - plus, I do hear that the season 3 DVDs should be available early 2010. Good luck with the wait...I feel your pain!!! It's awful that not only do U.S. fans have to wait for the show to hop the ocean, but we have to then wait for the DVD release if we don't get the right station. Very frustrating!

No, we don't get Comcast in our area - we're in a very rural area with only one choice of cable companies. Plus, we only pay for the lowest cable package so that we can afford to feed our Netflix addiction. :)