Inspector Lewis: Music to Die For 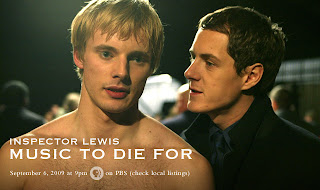 Wow, I can hardly believe I'm actually blogging about a Masterpiece Mystery episode less than 24 hours after it aired. This must be some sort of record. ;-) Here's the summary from the PBS website of tonight's installment of Inspector Lewis series 2, Music to Die For:
An elite Oxford lecturer gets in a drunken brawl at an exclusive club, and is later found strangled by a strip of boxer's hand tape. Richard Helm, his old friend with him that night, seems suitably grieved — but is he guilty? Lewis and Hathaway become immersed in the brutal world of bare-knuckle boxing as they comb Oxford for the killer. One boxing student in particular has unexplained injuries and pent up rage, but is he angry enough to kill his own tutor? From the epic operas of Wagner to Cold War intrigue and buried secrets, the case swells to a heart-pounding crescendo, along the way invoking the memory of Chief Inspector Morse.
So far, this series of mysteries is two-for-two in delivering multi-layered, complex, absorbing plots. This is probably my favorite Lewis episode yet. Initially, the story appears to be a simply case of a Wagner-loving professor (who happens to be gay) getting in over his head with the bare-knuckle boxing culture at Oxford. However, layer on top of that complex, Cold War-era secrets and German emigres with painful pasts and you have a fascinating tale of how the ramifications of past actions prove to be inescapable. In this case, the past in question has special meaning for Lewis since his former partner & mentor apparently knew the first victim. The whole idea of a Stasi informer frantically working to cover their past is simultaneously fascinating and chilling, especially when innocent victims start stacking up. Spy stories and German history fascinate me, so this episode was practically tailor-made for my tastes.
There's an interesting bit of casting in this episode. If you watched Merlin on NBC this summer, you'll recognize the guy on the left in the above photo as Arthur. It's Bradley James as student and boxer Jack Roth, and this is his first credited acting gig according to his IMDB page. This is a little off topic, but who cares? ;-) I enjoyed Merlin, and certain episodes were positively brilliant, but I'm not nuts enough about the series to do a big write-up (yet...I'm hopeful my obsession will increase with repeat viewings if the DVDs ever release). Having seen James in this Lewis mystery and all thirteen episodes of Merlin, I'm inclined to think he needs to work on his acting range a bit. But he's such a doll, I'll forgive him quite a bit. LOL!
Hathaway (Laurence Fox) and Lewis's (Kevin Whately) banter during this episode was absolutely superb. Hathaway gets in a few pointed comments about Lewis's hopeless track record with women, while Lewis gets in a zinger or two of his own regarding Hathaway's taste in music. The scene at the very end of this episode where they crash at Lewis's apartment for drinks is one of my favorites. They are so different, but they accept that, and that is of course key to why they work so well together. Fox does such an incredible job with Hathaway's character - the phrase "still waters run deep" comes to mind. He conveys so much with a look or a sigh, it's mind-blowingly impressive. In many respects Hathaway's much smarter than Lewis, but it's a mark of his character and intelligence that he's able to recognize how much he can learn from his more experienced partner.
Well, it's late, and I've got a packed day off tomorrow (yay!), so I'm going to call it quits. This episode was superb, and you'll just have to trust me on this when I say this short write-up doesn't do the story justice. Till next week!
Posted by Unknown at 9:51 PM

I was too busy staring at James' bare chest to notice any acting skills or lack thereof. LOL ;)

I have to admit I liked Moonbeams better than this episode, but I liked the twists and turns in this one much better.
Camy

@Camy - Both eps so far have been extremely strong. But for me, the twists and turns to this ep's storyline is what elevated it to "favorite" status (so far, anyway - this series is on a roll!).