Review: In the Shadow of Lions by Ginger Garrett

I originally posted this review on my old blog back in October 2008. I decided to cross-post it here for a couple of reasons. One, I'd eventually like all of my book reviews in this location. Also, one of the reasons I found the last episode of Robin Hood so fascinating was because of how it dealt with the translation of the scripture into English. The storyline immediately recalled this powerful novel to mind - if you haven't yet read it please, do yourself a favor and check it out asap! :) 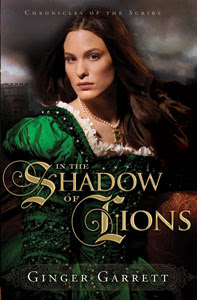 "I am the first writer, The Scribe. My books lie open before the Throne and someday will be the only witness of your people and their time in this world. The stories are forgotten here, and the Day draws close. I will tell you one of my stories. You will record it."

So begins the narration of one such angel in this sweeping historical tale set during the reign of England's Henry VIII. It is the story of two women, their guardian angels, and a mysterious, subversive book...a book that outrages some, inspires others, and launches the Protestant Reformation.

The devout Anne Boleyn catches the eye of a powerful king and uses her influence to secretly change history forever. Meanwhile, Rose, a broken, suicidal woman of the streets, is moved to seek God when she witnesses Thomas More's public displays of Christian charity, ignorant of his secret life spent eradicating the same book, persecuting anyone who dares read it.

Historic figures come alive in this thrilling story of heroes and villains, saints and sinners, angels and mortals...and the sacred book that will inspire you anew.

Every once in a while I read a novel that is not only well-written and entertaining, but also challenges and grows my faith. In the Shadow of Lions is such a novel, and the story has stayed with me long after I finished the book. Ginger Garrett (author of the novels Chosen and Dark Hour) excels at bringing history to life, and with her latest offering she turns her attention to the well-known Anne Boleyn and turns everything I thought I knew about the woman on its head. Garrett dares to challenge the view that Anne was a scheming, manipulative seductress, and asks the reader to consider another alternative. What if Anne was a committed Christian, caught in a vortex of danger and intrigue that swept her into events beyond her control? What if Anne's deeply held beliefs threatened the religious establishment of the day and earned her the enmity of powerful people, determined to sully her reputation for centuries to come?

In the Shadow of Lions is the story of two vastly different women - Anne, the noblewoman, and Rose, the peasant - both fighting against the restraints placed on them by a powerful patriarchal society. Anne, a devout Christian, wants to restore her family's good name in court, but more than that she refuses to dishonor God by becoming Henry's mistress. Rose, victimized by power-hungry clergymen who espouse virtue and then live in vice, longs for hope and redemption. Both women earn the enmity of powerful Church leaders who fear the "corrupting" influence of the Hutchins book (Hutchins was a pseudonym used by William Tyndale) - an English translation of the Bible taking Europe by storm. As people discover the scriptures for themselves, they learn that many of the established Church's teachings and requirements have little or no basis in biblical fact. The Hutchins book brings people face-to-face with God and His grace, without the Church as an intermediary. Anne's support of the Hutchins book is central to her tumultuous rise and fall from power in Henry's court.

The first entry in the Chronicles of the Scribe series is a fast-paced, completely engrossing read. The juxtaposition of Anne's and Rose's experiences are further contrasted with present-day scenes, where the Scribe angel dictates their stories to a dying editor, an unknowing heiress to the women's legacy of faith. Garrett lifts the veil between the physical and spiritual worlds and powerfully reminds readers that there is so much more to life than what can be seen with earthly eyes. Anne and Rose's story of faith and sacrifice is a heart-wrenching reminder that the right to read the Bible was a right paid for in blood. If the true version of Anne is even halfway between the commonly known history and story presented here, history has done her a grave disservice. Both as a woman and as a Christian, I found myself chastened by the reminder of how many freedoms I take for granted that were bought through the faith and sacrifices of women before me. As Garrett states in the epilogue, average Americans own multiple copies of the Bible and read none of them. Unless people know and cling to the truth found within those pages, unless we remember the sacrifices that bought the right the read the scriptures in the vernacular, the victories of the past will be lost, and the battle must be fought again. Kudos to Garrett for delivering a story brimming with life-changing truths, and giving Anne Boleyn new life as an achingly real, relatable - warts and all - child of God.
Posted by Unknown at 5:52 PM

LOL did you happen to see my book review for today? I liked this book a lot too! Thanks for posting this!

@Renee - You're welcome & yes, I did see your review! Glad you enjoyed this book as well!