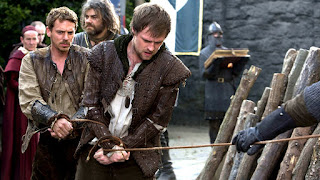 This episode of Robin Hood suffers from an unforgivably fatal flaw - Guy (Richard Armitage) is AWOL. Didn't the scriptwriters realize that he is the #1 reason 99.9% of this show's fanbase tune in on a weekly basis? I'm just sayin'...crazy, crazy move people!!

Now, aside from some annoyances I'll expound on later, the essential conflict of the episode is pretty fascinating IMO. Our favorite Sheriff (Keith Allen) has learned that the Abbot of Kirklees is guilty of heresy - he's been translating the scriptures into English. The Sheriff threatens to destroy the Abbot's work unless he agrees to help bring down Robin Hood (Jonas Armstrong) by turning the villagers against him - so the Abbot condemns Robin & crew as heretics. This episode, with its religious theme, was obviously designed to highlight newcomer Tuck (David Harewood), and it does a pretty decent job all things considered. Tuck's raging crusader-for-Robin Hood mentality still occasionally gets on my nerves, but the content of the translation storyline is strong enough for me to overlook that. The interaction between Tuck and the Abbot is pretty interesting - the Abbot, of course, will do anything to protect his life's work, while Tuck wants him to worry a little less about translating the scriptures and live some of the principles instead. The whole idea of the scriptures being in English does lead to some cute Much moments, when he rather redundantly can't wrap his head around the concept. ;-) And the Sheriff has several priceless moments throughout the episode as well - Keith Allen loves to ham it up and he takes advantage of every opportunity - like when he supplies a faux relic with which to intimidate the villagers. When he starts "preaching," and then kissed the decaying hand, it just cracked me up. Just when you think you've seen the Sheriff do it all... *sigh* ;-)

This episode - unfortunately - also provides plenty of screentime for annoying Kate (Joanne Froggatt) and her even more annoying mother. They (especially Kate's mother, because it's GLARINGLY obvious that Kate's starting to crush on Robin) are so blatantly anti-Robin and stupid about it to boot that it's just annoying. We could have had some originality, but NOOOO...we had to have some half-baked rehash of Marian & her father's conflicts with Robin. Now I realize that the way Kate's mother takes the Abbot's words to heart is fairly historically accurate considering the position of the church in society at the time. But I don't CARE, I can't STAND that woman!!

I have to mention the whole Kate/Much (Sam Troughton) thing. While Kate is in complete and utterly pathetic denial that she's got a crush on Robin ("*sob* I don't ever want to see you again Robin, do you hear me?!" Puh-LEEZE. *rollseyes*), poor Much is developing a crush on Kate. This does lead to a brief, but cute, scene where Allan (Joe Armstrong) attempts to give the hapless Much some advice on how to woo a lady. Unfortunately this is followed up by the scene where Much attempts to execute the plan, and he's told off by Kate because he smells. SERIOUSLY?! That's a little like the pot calling the kettle black...the girl is apparently also in denial about the fact that she's a peasant TOO. Yeesh!!

So let's wrap things up...Robin & the gang are captured when they fail to convince the Abbot to denounce the Sheriff. Kate attempts to rescue Robin by attacking him on the way to the pyre and slipping him an arrow so he can try to cut the ropes. Then - and this made me GAG, I kid you not - she WINKS at him. OF ALL THE NERVE!!! She has to be one of the most exasperating fictional characters EVER to pollute one of my favorite TV shows. I'm just sayin'...

Of course all's well that ends well, especially since this is only the 3rd episode of the season. If the episode didn't include all of the Kate-related scenes I would've been a lot happier with it, but that's just me - and I freely admit to being biased. :) Just think of the episode that could have been if the writing had been a bit tighter and Guy had been given a role in the story...a girl can dream, right?

Thankfully, Guy's back next week...and so is his sister. And people I think you're in for a treat - I loved the introduction of Guy's family - it's an example of a new character being written in a new, fresh, and fascinating way (especially when compared to KATE...okay, I'll get off that soapbox...).
Posted by Unknown at 3:53 PM

I'll have you know that I definitely DO NOT tune in every week to see Richard Armitage!!! I was actually glad he wasn't in this episode. I tune in to see the gorgeous Jonas Armstrong, and I know lots of people who have only been watching S3 just to see him, since the rest of the writing is trash and most of the newly introduced actors are totally annoying.

Hi Lisa & thanks for the comment. Jonas is my 2nd fav. :) Much of the writing this series hasn't been up to the series best moments, I would definitely agree with you there. Don't know that I'd go so far as to call it trash though...but I admittedly don't have the highest expectations, either. ;-)