Review: An Eye for an Eye by Irene Hannon 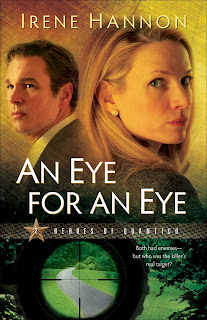 After an accidental shooting during a tense standoff, FBI Hostage Rescue Team member Mark Sanders is sent to St. Louis to work as a field agent and get his bearings while the bad press settles. Just weeks away from returning to Quantico, Mark has a chance encounter with his first love, Emily Lawson. But their reunion is cut short by a sniper. Now Mark must find the shooter before he strikes again. But what is his motive – and who was his intended target? Can Mark put the pieces together, keep Emily safe, and rekindle a relationship at the same time?

A fast-paced tale of romance, suspense, and intrigue, An Eye for an Eye is the exciting second book in the Heroes of Quantico series.

An Eye for an Eye is my first Irene Hannon read, and it definitely won’t be my last. A couple of years ago I absolutely fell in love with Dee Henderson’s romantic suspense novels, particularly the O’Malley Series, which featured a set of siblings, each involved in a high-profile, intense, fascinating career. It’s been a bit of a search for me to find other books that match the “gold standard” set by the O’Malley series - comparable, equally absorbing romantic suspense novels that feature just the right balance of high-profile jobs, swoon-worthy heroes, and fast-paced, intense action that doesn’t let go until the final page. Hannon is definitely on the right track with her FBI-centered Heroes of Quantico series. Though Eye is the 2nd book in the series, it can definitely be enjoyed as a standalone novel.

Mark and Emily’s story opens with a bang, literally. It’s a superbly executed sequence that sets up the unknown assailant and the threat against Mark and Emily. After being involved in a standoff situation that resulted in the accidental shooting death of a teenager, Mark was temporarily reassigned from his duties as a member of the HRT (Hostage Response Team) in Quantico to a less high-profile job in St. Louis as a field agent. A chance encounter with a former flame, Emily, quickly tailspins out of control when a sniper takes two shots at them and then disappears, leaving Emily wounded. Mark is left reeling – has one of his former cases come back to haunt him, or was Emily the intended target? And if so, how can he protect a woman scarred by past loss and intent on protecting her heart?

From Mark’s reaction to the shooting and the subsequent investigation, it’s obvious Hannon’s done her research into FBI protocols. The investigation clips along at a pace worthy of shows like 24 or its British equivalent, MI-5. The pacing slows down a bit once the imminent threat seems to be removed and Mark and Emily begin to reconnect. I loved how their relationship plays out – they have an actual history with each other which you rarely see in this type of story, and when they reconnect the chemistry is electrifying. The camaraderie between Mark and his friends and coworkers is also extremely well-executed – Hannon does a good job of nailing the male point-of-view and illustrating the depth of the bonds that develop between individuals in high-risk, life-or-death jobs. And even though Emily has her own fear and trust issues to work through, I really like how Hannon illustrates the strength of her faith – and how that unshakeable faith, even in the face of death, prompts Mark to re-evaluate his own faith walk. Well-researched, masterfully plotted, and with a few twists and turns I didn’t see coming, An Eye for an Eye is not to be missed for fans of romantic suspense.
Posted by Unknown at 4:13 PM

The woman on the cover looks like the actress from Fringe.

Thanks for a great review!
~ Lori

@Lori - I know, Dee Henderson just sort of dropped off the face of the earth! The only time I've seen her name pop up lately is for the occasional book endorsement (such as for this series). Hope you get to check out Hannon's books soon!

I loved Dee Henderson's O'Malley series, and you're right...there hasn't really been anything out there to remotely compare to it. I'll be looking for this series, for sure.

@Christy - Hi, and welcome to the blog! Until I read Hannon's book, the closest suspense series that came to the tone and pacing of the O'Malley books was the Mission: Russia series from Susan May Warren (think O'Mally-style suspense with an international flavor!). Those are definitely worth checking out.