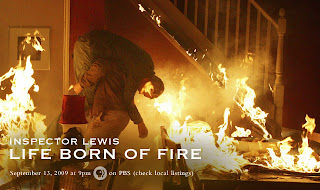 I know I'm really late blogging about last Sunday's Inspector Lewis episode, but don't expect much...Life Born of Fire didn't do much for me at all. I am relieved to know Tasha agrees with me about the merits...or lack therof...as regards this episode. Here's the summary from the PBS website:

Will McEwan staggers into a church and takes his own life at the altar, leaving behind a suicide note cloaked in religious symbolism — "On the road from Gethsemane to Calvary, I lost my way" — and a pamphlet for a shadowy spiritual group "The Garden." What would lead a young and faithful man to such desperation? Lewis and Hathaway launch an investigation, seemingly aided by the fact that Hathaway knew the victim. But as those most intimately associated with "The Garden" begin to die, Lewis questions Hathaway's sudden vow of silence. In a case involving blind faith and faltering trust, Lewis hurries to know more about the lofty world of Oxford religion and his partner before fire threatens to engulf one final victim.

I think the reason this story didn't work for me was because it was so freaking preachy. The whole point of the story isn't a mystery at all, it's to preach at the viewer about gay rights. It makes no sense that homicide detectives are sent to investigate Will's suicide...granted, he did call it in as a "murder," but you'd think once the first responders got there that they'd realize that physically it was a suicide and the necessary investigative adjustments would be made. But apparently that's just me overthinking it or something. :-P I think there was a real opportunity here to delve into the enigmatic Hathaway's (Laurence Fox) past and develop his relationship with Lewis (Kevin Whately) in a really meaningful, substantial way, that was rather missed.

Honestly, the whole idea that the perpetrator, Feardorcha Phelan, went to Brazil for a sex change operation and then decided that was the perfect cover so he could go around killing everyone who messed with his boyfriend's head comes off as extremely contrived. Actually, that's putting it mildly. *sigh* And the big climactic scene where Feardorcha/Zoe drugs Hathaway so they can both burn to death, all to the swelling soundtrack of the Firebird Suite by Stravinsky, actually made me laugh, it was so ridiculously staged.

So I think the takeaway moment from this episode is that overtly preachy, agenda-driven television does not come off well. Here's hoping that tomorrow's episode is more in the vein of And the Moonbeams Kiss the Sea or Music to Die For. Those episodes didn't shy away from dealing with thorny issues. However, in those stories a character's shady past or a mysterious situation resulted in a fascinating story that was thought-provoking because of smart scripting and direction, not because it beat you over the head with an agenda, or made you laugh out loud because it was so over-the-top ridiculous... *sigh*
Posted by Unknown at 2:09 PM

HA! I hated the climatic scene so much, I fast-forwarded through it. Too bad, it might have have had some lawls.

What I hated most about this episode, though, is just how embarrassed I felt for Lawrence Fox and Kevin Whately having to act out this drivel. Really, Fox could have put so much into that episode if he'd been given something good to work with. *sigh*

@heidenkind - Oh, the climax at the end was HILARIOUSLY bad. And then the very end, when the bells start to chime 6:00 and they just walk off...I was like "That's IT?! What the heck just happened?!?!" *sigh*

I agree with you, there was so much potential for really developing Hathaway's backstory - and Fox could've done SO MUCH with the right script. I felt like he sort of hinted at that when he actually started to cry into Zoe/F.'s shoulder...but by then the whole episode was so beyond ridiculous I didn't care that Hathaway had finally cracked and was actually emoting.

Wait, you didn't love Lewis saving (adorably drugged) Hathaway from burning to death? What is WRONG with you?!

@Joni - LOL, good point. I really should've addressed that aspect of the episode instead of getting hung up on the pre-rescue scenes. ;)

Hi, just found your blog after switching off this episode 20 minutes in, thinking it was going to be nothing more than a preachy sermon about fashionable causes....looks like I was right! It just ruins everything when it's obvious the writer is pushing an agenda, it's just so clumsy.