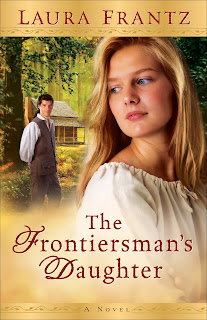 Lovely and high-spirited, Lael Click is the daughter of a celebrated frontiersman. Haunted by her father’s ties to the Shawnee Indians and her family’s past, Lael comes of age in the fragile Kentucky settlement her father founded. As she faces the many trials of life on the frontier, Lael draws strength from the rugged land. But the arrival of a handsome doctor threatens her view of her world, her God, and herself. Can the power of grace and redemption break through in this tumultuous place?

This epic novel gives you a glimpse into the simple yet daring lives of the pioneers who first crossed the Appalachians, all through the courageous eyes of a determined young woman who would not be defeated.

Review:
The Frontiersman’s Daughter by Laura Frantz is a stunning debut novel, a completely absorbing tale of a young girl’s coming of age in the wilds of late eighteenth century Kentucky. Lael Click’s story reawakened my love of this time period in history, an appreciation that had fallen by the wayside when I finished my last required U.S. history class in high school. It doesn’t help that in recent years, the Christian fiction market didn’t seem to have all that much room for colonial frontier fiction. Frantz’s debut has succeeded in establishing her as a welcome voice in the genre. Daughter is so absorbing, it immediately transported me back in time to memories of my fascination with the adventures of frontiersmen such as Daniel Boone and Davy Crockett. It’s impossible for me not to marvel at stories of those first settlers who left civilization in the east to build lives for themselves across the mountains, where they had to combat the Indians and the land itself in order to carve out new lives for themselves.

Lael Click grew up in the shadow of her famous father’s legend, the man who survived living with the Shawnee for two years. The celebrated frontiersman always seemed more at home in the wilderness, among the feared Shawnee, than as a settlement resident. No matter what role her family or friends tried to make her fill, Lael is too much “her father’s daughter” to ignore the pull of wilderness life, and with the help of Ma Horn, she establishes herself as a healer well versed in herb lore. Her search for place and contentment is complicated by the attentions of three very different men – the now-married rogue she once loved when a young girl, the exotic attraction of Captain Jack, a white man raised as a Shawnee and friend of her father’s, or the gentle Scottish doctor, whose skill makes them ideal partners and whose faith makes her long for a living, breathing relationship with the God of her childhood. Only when Lael learns to step out in faith, and lay aside the wounds of her past, will she be able to embrace the future and live out her father’s legacy of fearlessness.

I’d describe Daughter as a “throwback” novel in the very best sense of that term. This is a rich, “meaty” historical, brimming with atmosphere and detail that vividly brings life to all of Lael’s triumphs and struggles. This also isn’t a very dialogue-driven book, and in that respect it reminded me just a bit of classics such as The Last of the Mohicans by James Fenimore Cooper. The introspective passages not only give wonderful insight into Lael’s maturing character, but through them I think Frantz very accurately gives one a sense of the solitary, and potentially very lonely, nature of frontier life. Indeed, the land itself becomes almost as much of a character as Lael– and thanks to Frantz’s evocative, richly drawn descriptions, it’s easy to understand the pull of the land and how it’s beauty and wildness shaped Lael’s character. More than a romance, more than an adventure story, The Frontiersman’s Daughter is a journey worth savoring, and Lael Click is a character who will dwell in your thoughts long after you finish the final pages.
Posted by Unknown at 3:53 PM

Ruth,
Your review is just stunning! Very indepth and insightful, full of all those things that make the book true historical fiction. I can't thank you enough for taking time to read it - really savor it - as you must have done to elaborate as you did here. Bless you! I pray you like my upcoming novels just as much.

@Laura - Thank you SO much for your kind comment!! That just makes my day. :)

I knew it! This book sounds just my cup of tea (sassafrass, of course!). I've been writing in/researching 18th Century for the past five years, and am so happy to see this book. Can't wait to read it.

Hope there's room in the market for one more.

@Lori - Thank you! I think you would enjoy this book, I really loved it. Can't wait to hear what you think!

I stumbled across this review while reading a different part of your blog (Robin Hood) and am now so intrigued by this book that I am off to order it. Your comments were extremely interesting so thank you very much!

@calliope08 - You are so welcome, and I really hope you enjoy the book! If you get a chance, let me know what you think!