TCM's Summer Under the Stars festival may be over for 2009, but I still have one more installment of movie poster art appreciation to post.

First up is this lovely redesigned post for The Pirate, a (in my opinion) criminally underappreciated musical from 1948 starring Gene Kelly and Judy Garland. I love the way this poster showcases both of Kelly's roles in the film - as the circus performer Serafin on the left, and the dread pirate Macoco on the right. The whole image has a kind of fun, whimsical feel - reminds me just a tad of some of the poster art I remember seeing for Charlie and the Chocolate Factory. 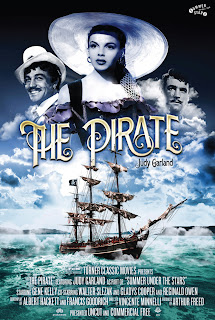 Next up is this freaking fantastic poster for The Big Heat from 1953 starring Glenn Ford and Gloria Grahame. I'd never seen this movie before it aired last month, but thanks to this poster I had to make a point of recording and watching it, and I'm so glad I did. It's great, classic film noir. And if you love coffee as I do, you'll never look at a steaming pot of it in the same way again. ;-) 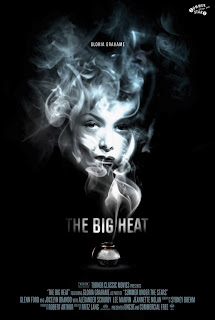 Only Angels Have Wings is one of my favorite Cary Grant films, from earlier in his career, and it stands out from his better known films in that it's a straight dramatic role. If you like old melodramas, this is a classic definitely worth checking out. This poster primarily features the image of one of my favorite actresses, the inimitable Jean Arthur. It's a rather old-fashioned design, I suppose, but classy - it really gives Jean Arthur an air of mystery and allure. She had a great knack for balancing friendliness, approachability, and class in her film appearances. I've been working my way through a good chunk of her 1930s and 1940s filmography, and it's been an absolute blast. 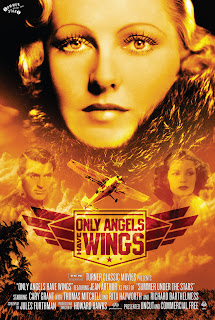 Mogambo is just a wonderful, fun adventure flick starring Clark Gable, Ava Gardner, and Grace Kelly. It's actually a remake of an earlier Gable flick - Red Dust - and in my opinion it's one of the times where the remake proves to be better than the original (though I have a feeling that the TCM hosts would disagree with me, LOL!). This movie poster immediately reminded me of the artwork for Australia, which I absolutely loved & adored. Mogambo is a thoroughly enjoyable, old-fashioned technicolor adventuring at its best. And the screen chemistry between Gable and his leading ladies positively sizzles, even today. 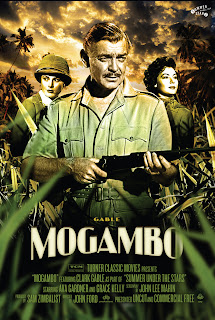 And finally, I'll end with this fantastic poster for one of my favorite westerns, The Magnificent Seven, featuring star Yul Brynner. I don't think he's ever looked more menacing, no? This poster is extremely well done, I could definitely see this type of design being used today. 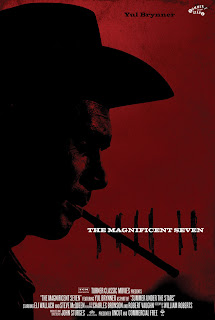 Since it's been a while, here are the links to part 1 and part 2 of this little series of mine. Perhaps this fabulous artwork will inspire you to check out some of these classics as well. :)
Posted by Unknown at 3:25 PM

I LOVE The Big Heat poster and the one for The Magnificent Seven. Very hip. :)

@heidenkind - The Big Heat poster is so classy, isn't it? :)