Inspector Lewis: The Great and the Good 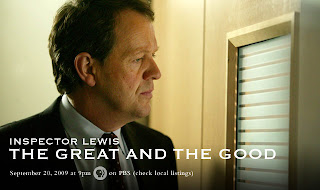 I can't remember what exactly I was doing Sunday night that I didn't watch this week's Inspector Lewis episode until this evening - oh, that was the night I started cleaning my closet while watching Roger Moore as James Bond in For Your Eyes Only. I think I have a bigger mess now than when I started. But that's neither here nor there...here's the summary about Sunday's episode, The Great and the Good, from the PBS website:
Teenager Beatrice Donnelly is found dazed in a field with no recollection of what happened to her. Forensic evidence fills in the grim picture — she was drugged and sexually assaulted. The trail leads Lewis and Hathaway to Oswald Cooper, who works at Beatrice's school. But Cooper has an alibi solidly supported by three pillars of the Oxford community — a prominent developer, a controversial radio personality and a former diplomat who recently returned to town. Still suspicious, Lewis is determined to crack Cooper's alibi, even if he has to resort to high-profile harassment to do it. But is Lewis's own status as a social outsider clouding his judgment or do those in Oxford's most prestigious social circles have the most to hide?
I greatly preferred this episode to last week's offering, Life Born of Fire. In my opinion this show works best when it allows Lewis (Kevin Whately) and Hathaway (Laurence Fox) to investigate the seedy underbelly of elite Oxford life. This episode was chock-full of nice Lewis/Hathaway moments, in particular the moment when Hathaway fears that a phone call to the victim's father drove him to commit a particularly gruesome murder. The way Lewis had to sort of talk Hathaway back from the brink was a nice mentor/partner moment. The proverbial icing on the cake was when Hathaway talked Lewis into dumping an old mattress in an "unauthorized" (I guess is the term?) dumpster...that was hilarious! This was a really great episode for Laurence Fox fans, just sayin'... :)
I have to give a nod to Jason Watkins who played the smarmy, soon-to-be-murdered Cooper. Though given brief screen time, the role is eerily reminscent as far as the creep factor goes of his turn in season one of Being Human, as Herrick, the vampire with dictator-like aspirations. His murder has unexpected fallout, and ends up bringing down three prominent members of the Oxford community as an insidious web of voyeurism, infidelity, and voyeurism come to light. Cooper also baits Lewis with the idea that he has information about the hit-and-run that led to his wife's death, still unresolved after all these years. I love, love, LOVED the fact that this episode hints at restarting that investigation, which, if they go down that road, should provide some excellent depth and backstory for Lewis's character.
This was a really strong entry in the Lewis series. The mystery itself contained some twists and turns that I didn't see coming - it was quite the multi-layered plot! Since the story involved Lewis & Hathaway taking on Oxford "elites," it was a great showcase for Lewis's outsider complex and how he views the Oxford community. It was also an excellent, fantastic "buddy" episode showcasing the growing depth to Lewis & Hathaway's relationship. It'll be fascinating to see where the show goes, particularly if Lewis becomes obsessed with Cooper's alleged information about his wife's murder, and how Hathaway will have to cope with that.
Posted by Unknown at 5:24 PM

Gawd, I love Laurence Fox. He is so my pretend boyfriend. ;) The part where Hathaway thinks he prompted Cooper's murder and Lewis says, "Well, come on, I'm not doing this by myself!" was my favorite part of this episode, too.

This was infinitely better than last week's episode. And the one next week apparently is going to involve a Narnia-esque book, so that will be fun!

@heidenkind - When this show is "on" they absolutely NAIL it!!

I can't wait for next week's episode - I looked up the cast online because the author in the preview looked familiar, and it turns out he played Mr. Bingley in Lost in Austen! Also, and I didn't see this in the preview, but James Fox is in this episode - and he's Laurence's father!! Here's the link: