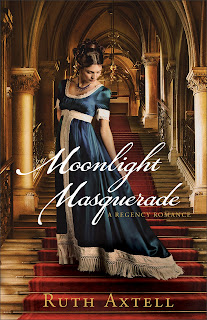 In 1813 the European coalition's war against Napoleon reached a critical juncture -- when the French emperor's invasion of Russia sent his once-invincible Grande Armee reeling, for the first time in nearly a decade the British and her allies see the chance to defeat Bonaparte once and for all within their grasp. The House of Bourbon stands poised to reclaim the French throne -- but not all French emigres pray for a return to the excesses of a monarchial government, factions that must be stopped if British aims are to succeed. When rumors reach the Foreign Office that the widowed Lady Celine Wexham -- French by birth, English by marriage, and a leading light in London society -- is passing information to pro-Bonaparte contacts, the decision is made to plant a spy within her home to ferret out the truth. Rees Phillips, a clerk toiling away in the Home Office, hoping for a career in the diplomatic service, is appointed to the task, selected as much for his discretion as his expert command of the French language. Planted within Celine's household as her new butler, Rees struggles to reconcile the fact that he must lie to serve his country with his deeply-held faith, never suspecting how quickly his lovely employer will wend her way into his heart. When he discovers that Celine is playing a more dangerous game than he realized, he must fight to reconcile his duty with his love for a woman he can never hope to win -- a risky masquerade, a dance with death that, if they survive, might result in a prize beyond their wildest imaginings.

Moonlight Masquerade is a gorgeously-realized Regency, replete with not only the manners and mores of the time period, sure to appeal to fans of Austen's romances, but with a rich exploration of the tension and reality of the history's time period. I adore a cross-class romance, and Celine and Rees make a heart-stoppingly romantic pair. In my experience it has been more common to read romances of this ilk where the heroine is in reduced circumstances, so it was refreshing to see Rees struggle to reconcile his desire to be Celine's hero with the social strictures of the time period defining male/female relationships, and in his case -- as her butler -- demanding obedience. The romantic tension between Celine and Rees develops at a deliciously slow burn, as neither party is willing to admit the unthinkable is occurring -- an attraction between two parties from wildly disparate worlds, whose respective loyalties in a world at war seem irreconcilable.

Fans of Downton Abbey's Lady Sybil will recognize a kindred soul in Celine, with her gentle spirit and egalitarian ideals -- a secret Jacobite, without the excesses of the revolution, setting her at odds to both the British and the exiled French royalists that would see the monarchy restored. The sting of a failed marriage have closed her heart to love, until a butler with an prepossessing, very un-servantlike gaze makes her wonder if someone could love her for herself, not her title or birthright. For his part, Rees is a deliciously dishy hero, possessing a code of conduct and a strong moral core that makes him an ideal hero, even if his common birth makes him an atypical knight errant to a lady fair. Their slow-burning attraction, culminating in a swoon-worthy kiss at a masquerade ball is a superb example of less is more, as the restraint they must show, the restrictions placed on their lives makes their forbidden attraction to one another all the more delicious to watch play out against the backdrop of the Napoleonic War intrigue.

Where this novel falters is in the actual tension regarding Celine's alleged spying activities -- or more appropriately stated a lack thereof. The first portion of the novel, wherein Rees establishes himself as butler in Celine's home contains very little actual spy-related tension. Much page time is given to either Rees or Celine wondering about the other's activities or motivations, but as to what intel Celine actually procures -- and more importantly, why she does it -- is left unaddressed until the novel's final act. While I love Rees and Celine's characters, to genuinely raise the stakes of their budding relationship beyond that of a cross-class romance, the nuts and bolts of each party's spycraft needed to be more meaningfully explored. Axtell is more than capable of penning a tension-filled scene, as the scenes at Hartwell House -- the headquarters of the French monarchy in exile -- prove. Axtell clearly knows her history -- the social mores, values, and political realities Celine and Rees would have known are all there on the page in her crisp, articulate prose. But for a novel that dances on the edge of bringing a rich sense of history to the beats of a more typical romance, Moonlight Masquerade falls short in balancing Axtell's compelling characters by keeping the stakes raised consistently for the pair throughout the novel.

Moonlight Masquerade proved a charming introduction to Axtell's writing. She lends her storyline a richness by saturating her characters' world with the social and political realities of their time. The very decision to place spycraft at the center of her storyline is a welcome change from the norm, crafting tension between faith and duty, masquerade and one's deepest, most heartfelt desires. Celine and Rees are compellingly-crafted characters, although one would wish for less focus on recapping their pasts, or dwelling on their undeniable attraction to one another, and more attention given to the tension-filled times in which they struggled to survive. That said, I love Axtell's passion for saturating her romance with a rich sense of history -- between the political tensions of the time and her strongly-realized characterizations, the pieces are in place for a winning formula, and I very much look forward to Axtell's next offering in this vein.

Sometimes it is hard to tell if you are the cat or the mouse...

Lady Celine Wexham seems the model British subject. French by birth but enjoying life in 1813 as a widowed English countess, she is in the unique position of being able to help those in need -- or to spy for the notorious Napoleon Bonaparte.

When Rees Phillips of the British Foreign Office is sent to pose as the countess's butler and discover where her true loyalties lie, he is confident he will uncover the truth. But the longer he is in her fashionable townhouse in London's West End, the more his staunch loyalty to the Crown begins to waver as he falls under Lady Wexham's spell.

Will he find the proof he needs? And if she is a spy after all, what then will he do?

With sharp wit, fast-paced dialogue, and infectious intrigue, Ruth Axtell deftly creates a world where black and white burst into a confusion of colors -- and no one is who they seem.

*My thanks to the publisher, Revell, for a review copy.
Posted by Unknown at 12:29 PM

I've seen lots of comments/reviews that are mediocre on this book however I love the title - it's so romantic and appealing.

Happy you enjoyed it, Ruth!

I loved this one. I didn't want to put it down.

@Rissi - I wouldn't call it mediocre by any stretch -- but I do think there are some story/character issues that would've improved the flow. I have high hopes for Axtell's next release! :)

@Holly - So glad you enjoyed this one so much!