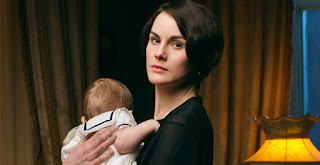 I woke up this morning to discover a slew of Downton-related casting news! Without further ado, here's the scoop on the new characters that will be visiting the Crawleys in the show's upcoming fourth season:

Tom Cullen as Lord Gillingham, an old family friend of the Crawleys who visits the family as a guest for a house party - no idea who this guy is, but he's cute! :)

Nigel Harman as Green, a valet - apparently he was in a 2010 Marple? I need to re-watch that.

Dame Harriet Walter as Lady Shackleton, an old friend of the Dowager - perhaps most familiar as Fanny Ferrars Dashwood in the 1995 Sense and Sensibility, Walter has also appeared in period dramas ranging from Marple to Little Dorrit.

Joanne David in a guest role as the Duchess of Yeovil - perhaps they mean Joanna David, as the IMDB doesn't list a Joanne. If that's the case, this David is a period drama vet (Bleak House, Foyle's War).

Julian Ovenden as aristocrat Charles Blake - HOLLA ANDREW FOYLE! And that's all I have to say to that.

Dame Kiri Te Kanawa as a guest who sings in the house - famous singers at house parties seem to happen quite frequently in Christie novels, it's about time one came to Downton. :)

The article also confirms the return of Shirley MacLaine as Martha Levinson for the Season 4 finale. I couldn't be more thrilled about that as I loved Martha!

Also, apparently O'Brien is OUT...this is kind of a shocker, but I really shouldn't be surprised given her storyline in the Christmas episode. My bet is that we discover she took the position of ladies' maid for Lady Susan.

Thoughts?
Posted by Unknown at 7:11 AM

I wondered it they were setting up O'Brien to leave with Lady Susan. FIne with me!

Others look interesting. I especially love Dame Harriet Walter. She was so politely wicket as Fanny Dashwood!

This is AWESOME, Ruth! Thanks for the information and keeping us all so informed.