Review: Love in a Broken Vessel by Mesu Andrews 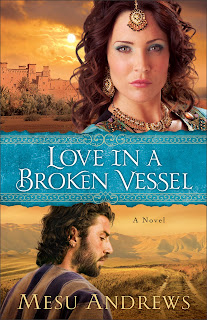 As a young prophet-in-training, studying under the likes of Amos and Jonah at the prophets' camp in Judah, Hosea dreamed of the day God would make complete the prophetic call on his life, granting him his first prophetic mission. But when the message comes, it contains a caveat the likes of which Hosea never dreamed. Called to return to Israel, the homeland he'd left twelve years before to study God and His word, Hosea is filled with a mixture of fear and honor when God grants him his first prophetic mission to return to Israel, admonishing the people to abandon their idolatry and return to Yahweh. But the message is only half the mission -- for Hosea is to marry a prostitute, an unfaithful harlot, and in loving her -- in binding himself physically and spiritually to a woman who embodies everything a righteous Israelite would find abhorrent -- become a living, breathing example of God's never-failing love for His faithless people. When the woman in question turns out to be Gomer, Hosea's childhood friend, long thought lost, Hosea is shaken to his core -- for loving this woman will test his faith in God's promises like he'd never thought possible. For this woman, this known harlot, threatens to break his heart far beyond the bounds of human endurance, filling Hosea with a love that only a God who loves us in our brokenness, who loves us in spite of ourselves, in spite of our failings, could comprehend.

Gomer lost all faith in the goodness of man when her father, the man who should have protected her innocence, sold her to the priestesses of Asherah for personal, political gain. When her affair with a Baal priest threatens scandal, Gomer is left at the door of a brothel, consigned to a life working the dusty Samarian streets. With survival her only aim, she has long since resigned herself to doing whatever she must in order to protect herself from harm. When she earns the ire of a powerful general for disrupting the king's sacrifice to Molech, her shocked surprise at Hosea's appearance is quickly overcome by his offer of marriage and what it means -- the rare chance to escape the brothel. But life as a prophet's wife presents its own set of challenges, and with little faith in Hosea's promises and even less in his God, Gomer finds herself returning to her former life again and again -- anything that facilitates her control over her life, protecting a heart battered, scarred, and shuttered by years of abuse and neglect. Time and again Gomer rejects Hosea and his God -- and time and again Hosea, propelled by faith in his God, offers her mercy. Could even her life, shattered and cracked beyond all human hope of repair, be redeemed into fresh life and purpose if she but surrenders to Yahweh?

With her third novel, Mesu Andrews continues to astound with her gift for bringing scripture to life on the page, and like its predecessors, Love in a Broken Vessel speaks powerfully to God's never-failing love and provision, bringing stories thousands of years old to life with a compelling, undeniable relevancy. The scriptural background for Hosea and Gomer's personal lives is relatively limited, especially when compared to the scripture covering Job and Solomon for her previous books. The Book of Hosea is one of the Old Testament's slimmest texts, and of the fourteen chapters only the first three discuss Hosea and Gomer's marriage, setting the stage for its use as an illustration of God's relationship with unfaithful Israel in the subsequent eleven chapters of prophetic poetry. Thus their lives are ripe for fictional interpretation, but as always Andrews carefully grounds her suppositions in scripture, research, and historic fact, lending her construct of the Hosea/Gomer relationship an undeniable sense of authenticity.

Hosea and Gomer's story has been brought to life before, perhaps most notably Redeeming Love by Francine Rivers, which transplants the story and characters into the setting of a prairie romance. Personally, for me, that lessens a critical component of the story -- their lives and marriage in relation to God's plan for Israel, His chosen people. By recreating their lives against the backdrop of the turbulent times in which they lived, Andrews succeeds in bringing to life the scriptural text with a spiritual relevancy that evokes the times in which they lived and the timelessness of the message, sketching the continued relevancy of the scripture today against her dramatic backdrop.

Love in a Broken Vessel is most similar in tone and content to Andrews's debut, Love Amid the Ashes, with its stirring, challenging examination of the role suffering plays in a believer's life. It's always been a bit easier for me to see Hosea in terms of his prophecies, but this novel is a stark, poignant reminder of the prophet's very human side, and the very real cost (and struggles) that came with his obedience to God in all things. When reading Hosea, it is potentially easy to fall into the trap of viewing the personal aspects of the text as ancillary, forgetting -- or merely not connecting -- the potent personal drama playing out between Hosea and Gomer with the tumult the straying nations of Israel and Judah faced during their lifetimes.

Like her previous efforts, here Andrews once again brings the "bones" of scripture to vibrant life, restoring the relatability and passion to Hosea and Gomer -- all too easy to classify as "characters" in scripture, while here the full scope of their lives is vibrantly reimagined on the page. I loved Hosea's passion for God and the raw honesty with which he grapples the full implications of what God is working out in his prophetic ministry as well as his personal life. But Gomer - oh! - she broke my heart. Perhaps one of Andrews's best-realized characters, the tragedy of her life -- the numerous betrayals, the pain of living to endure rather than thrive -- just broke me. By fleshing out Gomer's character, restoring her humanity, Andrews gives full sway to the heart-breaking reality of God's heartache over Israel's idolatry on a national/global level through this extraordinarily personal account of a woman who, over and over again, rejects the redemption and restoration Hosea and his Lord offer -- all because she's bought into the lie that she's come too far to be redeemed.

Where Job faced suffering from a position of faith, Gomer does so as an outsider, as one unprepared and ill-equipped to believe in sovereign God who loves her. While in our humanity one might often mistake silence or the absence of action, of prevention, for a lack of care, here the balance is redressed -- human failings, choices, free will, are heart-breakingly wrought out, but through ever tear, every disappointment Andrews weaves a ribbon of faith that brilliantly illustrates God's sovereignty, redemption, and passion for His people. Rich with history, intrigue, and personal and political turmoil, Love in a Broken Vessel is a stunning story of God's love, of His delight in His children, of His passion for welcoming the prodigal, healing the wounded, and restoring the broken. This is a tale that will stay with you long after you finish the final pages -- a story of conviction and encouragement, one to savor -- an extraordinary gift that will encourage and inspire. Bravo, Mesu -- very, very well done.

God gives Hosea a difficult command -- marry a prostitute in order to show God's people the nature and depth of His love for Israel. When Hosea goes to Israel to proclaim the Lord's message, the woman God directs him to marry turns out to be his childhood friend Gomer. He finds her broken and abused, unwilling to trust Hosea or his God. But when marrying Hosea becomes her only means of escape, Gomer does what she's good at -- she survives. Can Hosea's love for God and God's love for Israel restore Gomer's broken spirit?

With her powerful combination of in-depth research and masterful storytelling, Mesu Andrews brings to life one of the most complex and fascinating stories of love and forgiveness in the face of utter betrayal.

*My thanks to Revell for the review copy, and my apologies for being late with posting this review.
Posted by Unknown at 2:11 PM