Review: A Conspiracy of Alchemists by Liesel Schwarz 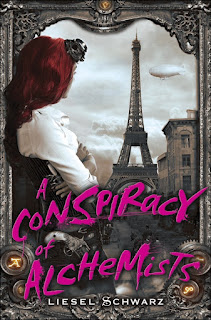 Eleanor "Elle" Chance is far from your typical turn-of-the-century miss, foregoing traditional female pastimes such as teas, dances, and gossip for a career piloting her beloved dirigible, the Water Lily. But being a pilot is a risky and expensive enterprise, and in order to help fund her independent efforts Elle agrees to an under-the-table commission -- transporting a box from Paris to England. The seemingly innocuous cargo proves to be more than Elle bargained for, as she is attacked by an alchemist and barely escapes Paris with her ship intact. Forced into an uneasy alliance with the dashing Mr. Marsh (a.k.a. the Viscount Greychester, a.k.a. a powerful warlock), Elle finds herself thrust into a fight between the forces of Light and Shadow, a fight that threatens to disrupt the delicate balance of the world forever. Forced into a brewing war not of her own choosing, Elle uncovers dark secrets in her past, secrets that force her to reevaluate the world as she knows it and her place within it, promising to change the trajectory of her life forever -- if she survives.

With steampunk stories fast becoming a new favorite genre, I jumped at the opportunity to read Schwarz's debut. I loved her world-building -- she has all of the traditional steampunk elements, from dirigibles to clockwork inventions -- but where she separates her vision of early twentieth-century Europe from the rest is  in her delineation between the elements of Shadow and Light. The Light represents Elle's familiar world -- her father's work as an inventor of spark-powered flying machines, a world of scientific, rational thought and technological advancement. On the flip side of that coin is Marsh's world, the world of Shadow, encompassing all elements of the magical and paranormal, from alchemists and warlocks to spells, potions, and absinthe-loving fairies. The concept of all being right with the world when these two opposing forces are balanced is an intriguing one, particularly as Elle approaches life from a very scientific, rational standpoint. As the novel progresses she quickly discovers to her chagrin that she possesses a power within capable of balancing these two worlds, a power that calls on the belief, recognition, and use of forces she is loathe to understand or even acknowledge.

While I really liked Elle's spunk and determination to take care of herself, there were moments when her independence danced on the border of foolish willfulness. Also, her pivot from outright rejection of her heritage to acceptance seemed too abrupt, too conveniently played. That said, as there are at least two sequels planned there are lots of opportunities for growth as regards her character and motivations. I loved Marsh -- I  mean seriously, what's not to love about a dishy warlock/viscount burdened with long life and a tragic romantic past? While I find him infinitely more interesting than Elle, I wish Schwarz had started to delve into his past earlier in the novel, rather than waiting until nearly two-thirds of the way through to flesh out Marsh's character in a truly meaningful manner. I also find his initial rather blind obedience to his order and its tenets somewhat troubling, as there isn't even the pretext of above-board respectability in that regard. That aside, I loved Marsh's manners and deeply ingrained sense of honor, and the few swoon-worthy moments he shares with Elle midway through the novel, though overall I was underwhelmed by their relationship and chemistry. They are however extremely likeable characters, rich with potential for growth both individually and as a power couple within Schwarz's brave new steampunk universe, so I look forward their relationship playing out in the promised sequels.

Schwarz's debut effort delivers a world rich with character potential and one of the more interesting, fully-fleshed out mythologies that I've had the pleasure of discovering since I first began to explore steampunk-themed fiction. I cannot wait to see how sequels further explore this potentially explosive conflict between the elements of Light and Shadow, particularly when two powerful players such as Elle and Marsh renounce their expected allegiances and go rogue. :) Schwarz's world-building is one of her writing's greatest assets, and coupled with her penchant for high adventure, with more polished characterizations and bit more romantic sizzle this series has great potential that I hope to see further realized in future installments. A Conspiracy of Alchemists is a very solid debut, sure to mark Schwarz as an author to watch in this explosively popular genre.

In a Golden Age where spark reactors power the airways, and creatures of Light and Shadow walk openly among us, a deadly game of Alchemists and Warlocks has begun.

When an unusual cargo drags airship-pilot Elle Chance into the affairs of the mysterious Mr. Marsh, she must confront her destiny and do everything in her power to stop the Alchemists from unleashing a magical apocalypse.

Thanks to TLC Book Tours for the review opportunity!
Posted by Unknown at 2:11 PM

I liked Marsh a lot too while having mixed feelings about Elle. Overall I preferred the world-building more than the character development and I'm not sure I'll be returning for the second installment.

Steampunk is one of my new favorite genres and this one sounds quick fun!

Thanks for being a part of the tour. I'm featuring your review on TLC's Facebook page today.

@heathertlc - It is fun, I hope you enjoy it! And thanks for the tour opportunity, and the feature on the TLC FB page! :)

I finally finished it, and I think I know what you mean. The beginning was great, and I loved Elle, but about a quarter of the way through it just stopped engaging me.