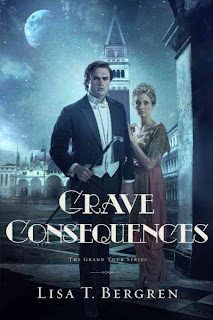 In two brief months, the course of Cora's life has irrevocably changed, leaving her reeling in its wake. From a future secure in the knowledge of her parents' love, with plans to attend Normal School and become a teacher, she discovered the life she'd always claimed as hers to be built on a lie. In truth the illegitimate daughter of copper baron Wallace Kensington, Cora's birth father swept into her life like a whirlwind, determined to bring Cora into the fold of his family and open her eyes to a world replete with wealth and possibilities beyond her wildest imaginings. Reluctantly joining her half-siblings and their friends on their own fabled Grand Tour of Europe, Cora finds herself coming to care for her companions, individuals once thought so unlike her proving more similar in their hopes, dreams, and struggles than she'd ever assumed children of privilege could be. And the longer she experiences the power and privilege attendant with being recognized as a Kensington child, Cora begins to fear that rather than simply expanding her horizons, this trip might fundamentally change her, leaving her with an identity no longer of her own making.

When unexpected danger finds the tour group on their sojourn in Paris, tensions are heightened and the tenuous alliances and friendships between members of the group are tested. Continuing the tour under a shadow of danger, Cora finds herself increasingly anxious about her future and determined to establish a life and a future for herself beyond the auspices of the Kensington name. She also finds herself torn between two very unlikely men -- the young apprentice tour guide, or "bear," William, and the wealthy and dashing French nobleman Pierre. The latter promises a life of ease and adoration, establishing a life for Cora in her half-siblings' aristocratic circles, while the latter sees Cora as she truly is -- a simple farm girl, oft-times overwhelmed, determined to make her dreams come true. Amid the glittering European sights, stalked by a shadowy menace, Cora must discover if she possesses the courage to follow her heart, taking the best parts of her past and present to establish a new identity, and to stake her claim to a future of her own making.

The first novel in Bergren's Grand Tour series, Glamorous Illusions, was one of my favorite reads last year, the wait for its sequel interminably long -- but proving well worth the wait, proving true the adage that patience is a virtue. Grave Consequences possesses all of the elements that made its predecessor a stunning success -- glamorous settings, well-drawn characters, and all the romance and intrigue of a bygone era that fans of costume dramas like myself could wish for. This is a novel that creates Cora's newly-glamorous world wholly and completely on the page, bringing the sights, sounds, and customs of her journey to brilliant, vibrant life with the scope and sensibility of a gorgeously-rendered film. Bergren has a gift for sprinkling facts and description liberally throughout the text, never overwhelming the story -- instead, transporting readers to stand alongside Cora in wonder of the sights and opportunities the tour has given her.

Cora continues as, generally, one of the most likeable, honest and relatable heroines I've met on the page. I love her strength, intelligence, and determination to be her own woman, the courage of her desire to carve her own path in a world where women were still very subject to the dictates of a patriarchal society. However, in this volume I had to remind myself numerous times that Cora is only two months into her relationship with the Kensington family and their world of power and privilege. Perhaps it was her first brush with danger -- but Cora spent half the novel clinging to a foolish, unbelievably naive view of her father's power and nature at odds with her perspective in the prior book, a frustrating regression character-wise that remains unresolved until the novels final quarter.

That said, I love Cora's suitors, and the push-and-pull between her forbidden, wildly blossoming feelings for the young bear, Will, and the continued, delicious havoc the gentleman Pierre continues to wreak on her fragile emotions. Will is an absolute darling, with his quiet regard for Cora and his determination to behave honorably as regards his intentions. But I do wish that, with Will sharing third person point-of-view scenes, that the end game as regards this love triangle wasn't quite so clearly telegraphed -- because Pierre is easily Will's equal in the handsome nobility department. :) I desperately hope that Pierre gets something resembling his own happy ending in the upcoming third volume, as I tend to feel that Cora tends to not give him a fair shake more often than not here. I suppose I can't help but cheer for the underdog. *wink*

If Grave Consequences is any indication, Bergren is on track to achieve something rare when it comes to series fiction -- three consecutive novels, one epic story, all parts equally compelling and stunningly realized on the page. With the added threat of kidnappers shadowing their journey, Bergren further underscores the life-changing nature of this trip not only for Cora but each of her companions -- a literal and symbolic transition from childhood to the responsibilities of adulthood -- and the consequences attendant on striving to take responsibility for one's own life. With a subtly-drawn, organic faith thread, well-crafted characters, and a plot brilliantly executed in its simultaneous meticulous attention to detail and breathtaking scope, Grave Consequences is the rare sequel that nearly matches its predecessor beat-for-beat. I cannot wait to rejoin Cora and her family in their final chapter travelling across European world, one final chance to visit an opulent world in the twilight of its powers.

For Cora Kensington, the journey of a lifetime has taken unexpected turns. And her future -- her very life -- depends on the decisions she'll make at each crossroad. As the Grand Tour with her newfound family winds through France, Austria, and Italy, an unseen enemy trails close behind. And a forbidden love continues to put everyone's plans at risk.

Cora must escape the bonds of the past and discover the faith to make the right choices...because each one has grave consequences.

*My thanks to Litfuse Publicity for the review opportunity. Click here to read what others are saying about Grave Consequences.
Posted by Unknown at 4:53 PM

Ruth, you have again put - exactly - into words just what this series/novel is all about! How wonderful your review is, friend.

What you think of the love triangle is exactly how it comes alive on the page and Cora is indeed a very "real" and relatable heroine - she is the "face" of this entire series and I love her to death. Here's hoping Pierre isn't too hurt. ;)

I really do like Cora too, and I cannot wait to see how Bergren wraps up this story. Though I have to admit, it is a bit bittersweet even thinking about the ending, knowing the war is coming the following year. That's the mark of memorable characters, though, if they feel *that* real IMO. :)