Once Upon a Time - the novel! 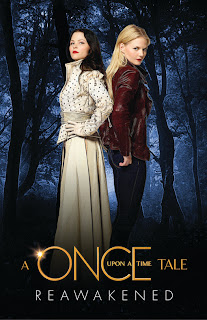 ABC is continuing its tradition of publishing novel tie-ins to popular shows (i.e. Castle) by releasing Reawakened in just a few weeks -- the first in what may be a series of books. Per the Entertainment Weekly article, the "novelization of the show’s first season and promises to give “fans of the show a whole new look at their favorite characters and stories.” The narrative will be told in alternating points-of-view—that of Emma Swan (portrayed by Jennifer Morrison in the show) in the real world of Storybrooke, and Snow White (Ginnifer Goodwin) in Fairy Tale Land. The novel is written by Odette Beane, and based upon the TV series by Adam Horowitz and Edward Kitsis."

The e-book version of Reawakened will be released April 27th, followed by the paperback on May 7th. Here are the Amazon links: Kindle/paperback. You can read an excerpt of Reawakened here.
Posted by Unknown at 5:07 PM

This should be fun! Always did mean to look into those Castle books and never have.