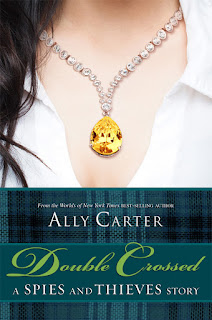 Over Christmas 2011 I discovered Ally Carter's writing and absolutely devoured the first two books in her Heist Society series, Heist Society and Uncommon Criminals. People, I am head-over-heels in love with those books -- they are so much FUN. So it was with eager anticipation that I looked forward to the release of the third installment of Kat and Hale's thieving adventures, Perfect Scoundrels. Thankfully, my always-overwhelming TBR pile delayed my diving into that new release, time in which I discovered Carter's short story release, bridging not only the gap between Heist Society #2 and #3, but featuring characters from her other well-known young adult series -- the spy-centric Gallagher Girls.

Having not yet started Carter's Gallagher Girls series (despite my love of spycraft in film and fiction), I was a little worried that the novella would lose me by introducing a world and characters with which I was totally unfamiliar. But I needn't have been concerned -- this novella is an absolute delight from start to finish. By narrowing the focus from each series to two characters -- the charismatic and dishy Hale from the Heist books, and Macey McHenry, society darling and spy-in-training. With two characters from such familiar socio-economic backgrounds but very different lifestyles, it was a brilliant stroke to reveal both series take place in the same world, with endless possibilities for future crossover adventures.

Within the short-span of the novella format, Carter packs all of the ingredients that makes her Heist Society novels such fun -- high stakes targets, danger, and a dash of humor and romance in the vein of films like To Catch a Thief -- though as a firm Hale/Kat-shipper, Hale and Macey's banter adds spice and humor to their interaction while only confirming that Hale's heart is very much taken by one brilliant thief named Kat. AS IT SHOULD BE. *wink*

It's such fun seeing Carter juxtapose the very different worlds of her two series -- one ostensibly dedicated to promoting law and order and the other always on the lookout for their next mark. Forced to work together in order to survive, the tension that results positively sparks from the page and leaves me hoping that further crossover adventures -- whether short stories or full-length novels -- will be in the offing, perhaps each focusing on different sets of characters from each series. Double Crossed is a charming addition to the world of both series, sure to please existing fans -- and create new ones -- with its glamour, cracking pace, and oh-so-memorable characters.


W.W. Hale V—Heir to an American dynasty or master thief?

There are two sides to every coin. Whether these two can work together is a tossup.

Born into privilege, Macey and Hale are experts at mingling with the upper class. But even if they’ve never raised an eyebrow at the glitz, neither teenager has ever felt at home with the glamour.

When Macey and Hale meet at a society gala, the party takes a dangerous turn. Suddenly they’re at the center of a hostage situation, and it’s up to them to stop the thugs from becoming hostile. Will Macey’s spy skills and Hale’s con-man ways be enough to outsmart a ruthless gang? Or will they have to seek out the ultimate inside girl to help?

The worlds of Heist Society and the Gallagher Girls collide in Ally Carter’s fast-paced, high-stakes and tantalizing new story. Get a behind the scenes glimpse as Ally delivers an irresistible thriller that is full of her signature style and savvy twists.
Posted by Unknown at 6:43 PM

So excited to begin reading this series - love that they are such good reads. :)

Thanks again Ruth for the recommendation. :)