Review: The Assassin and the Desert by Sarah J. Maas 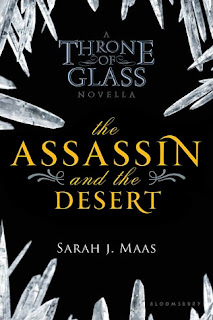 When Celaena Sardothien disobeyed master assassin Arobynn Hamel's directive to negotiate the purchase of slaves, she paid a dearer price than she ever expected. As Arobynn's heir and Adarlan's Assassin, she once thought herself untouchable. But when Arobynn beats her to within an inch of her life following her "betrayal," followed by exile to the Red Desert to train with the Master of the Silent Assassins, Celaena begins to question not only her future but her very loyalty to the order -- and the man -- that has played such a crucial role in shaping her into the feared killer she is today. At the home of the Silent Assassins Celaena discovers a culture and way of life totally beyond her realm of experience -- one that celebrates shared knowledge, fosters friendships, and -- perhaps most importantly -- forces Celaena to prove herself afresh. In the Red Desert, the reputation of Adarlan's Assassin counts for little. When a spy is discovered and a plot unfolds, bent on destroying the Silent Assassins, Celaena is faced with a choice and an unexpected lesson. Can a woman who prizes needing no one risk herself to save others? And will the cost of mercy prove too high a price for this cold-blooded assassin to risk?

After devouring Celaena's first adventure in just a day, I eagerly dived into the second of four prequel novellas to Maas's Throne of Glass, and I was most assuredly not disappointed. The Assassin in the Desert is a welcome thirty pages longer than its predecessor, allowing for more action and character development. Celaena's forced sojourn in the Red Desert stretches and challenges the fiercely independent, smart, driven assassin in ways that not only develop her unique skill set, but forces the youthful warrior to grow up -- i.e., begin to realize that she cannot rest on her laurels, cannot assume pre-eminence in a field that thrives on double-crosses and operating in the shadows merely by virtue of her name and history. I LOVED the character growth Celaena undergoes in this novella, and the choices she faces at the story's conclusion broke my heart. This is a fast-paced, thoroughly entertaining novella with moments of unexpected depth. Maas has succeeded in creating a character and a colorful, richly-textured world that I cannot wait to spend more time in, uncovering its secrets. Very well done -- and bring on the next chapter of Celaena's story, asap! :)

The Silent Assassins of the Red Desert aren’t much for conversation, and Celaena Sardothien wouldn’t have it any other way. She’s not there to chatter, she’s there to hone her craft as the world’s most feared killer for hire. When the quiet is shattered by forces who want to destroy the Silent Assassins, Celaena must find a way to stop them, or she’ll be lucky to leave the desert alive.
Posted by Unknown at 6:26 PM