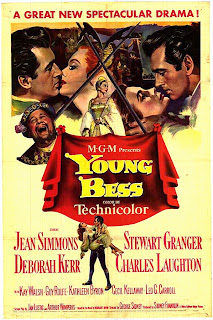 Released to coincide with the coronation of Elizabeth II in 1953, Young Bess is a glossy historical epic, a Technicolor spectacle as only a studio like MGM could deliver. Based on the 1944 novel of the same name by Margaret Irwin (which I was happy to discover that Sourcebooks recently re-released), the film plays a little fast and loose with history in its attempt to provide a highly romanticized view of why Elizabeth I remained unmarried. But any historical fudging aside, the resulting product is a thoroughly enjoyable and engaging film that provides some fascinating insight into what Elizabeth the teenager might have been like.

The film is framed by Mrs. Ashley (Kay Walsh), Elizabeth's long-time governess and companion, and Mr. Parry (Cecil Kellaway), the princess's steward, celebrating the news that their charge will soon achieve the ultimate triumph - being crowned Queen of England. Their reminiscences take the viewer back to Elizabeth's tumultuous childhood, where her status at court was in near-constant upheaval thanks to her father's whims and remarriages. This film gave Charles Laughton the reprise his take on Henry VIII, a role he'd previously won an Oscar for in 1934's The Private Lives of Henry VIII. Physically Laughton is an excellent match for Henry's portraits, and he brings all of the life and bombast to the character that I always imagined the real-life Henry possessing.

One of the interesting things about this film is how it positions the upheaval losing her mother to the axe and her father's subsequent remarriages must have had on the young Elizabeth's pysche (Noreen Corcoran). Corcoran is an excellent young Elizabeth, bringing just the right balance of childhood insecurity and the determination and survival skills that would later define her as a ruler to the role. The "young adult" Elizabeth was played by Jean Simmons, in one of her best performances. Simmons was twenty four at the time of Young Bess's release, just one year shy of the quarter-decade mark when Elizabeth I ascended the throne. So though she's a bit older than the teen Elizabeth was during the history depicted on-screen, the Simmons' slight frame and pixie-like features work in her favor, lending her an air of youthful fire and vulnerability.

The object of Elizabeth's romantic yearnings in this film is Thomas Seymour, played by Simmons' real-life husband Stewart Granger (the two were married from 1950-1960 and appeared in four films together). The chemistry between Simmons and Granger is practically palpable, and lends credence to the script's assertion that Elizabeth and Seymour had a really passionate little thing going on. Now I love Stewart Granger. LOVE HIM. But this, my friends, is not his best work. He's a little too earnest here, hamming for the camera with his best "look at me, I'm an awesome romantic lead" emoting. I prefer the roles that allowed him to be a bit more playful, to balance the on-screen heroics with a sly glint of humor (i.e. Scaramouche).

The always-classy Deborah Kerr plays Catherine Parr, Henry's sixth and final wife, and the woman who stands between Thomas and Elizabeth. Kerr is all cool, kind regality to Simmons' more fiery emotionalism. This was an on-screen reunion for Kerr and Granger (there is some speculation they had an affair); the pair had made King Solomon's Mines three years prior. Whether or not the affair speculation is true, Kerr and Granger had a degree of on-screen chemistry that made Thomas Seymour's conflicting feelings for two very different women fairly believable.

My absolute favorite part of this film is Rex Thompson's scene-stealing performance as Edward VI. Young Bess marked Thompson's film debut at the age of eleven, and he'd continue to work, mostly in television, for the next thirteen years - a notable exception being his turn as Louis Leonowens in The King and I. Thompson is amazingly adept at stealing the scene every time he appears on-screen with his enthusiasm, prepossing demeanor, and confidence. This kid has the royalty thing DOWN - and to top it off his accent is quite good, especially considering that he's from New York (I was shocked when I discovered that fact). While this film paints, I think, an overly-positive portrait of the brother/sister relationship between Elizabeth and Edward, in the context of this film Simmons and Thompson's regard and camraderie work extraordinarily well. The film basically elminates their half-sister Mary, and focusing instead on the court intrigue the pair endured vis-a-vis Ann (Kathleen Byron) and Ned Seymour (Guy Rolfe), the latter appointed Lord Protector since Edward was a minor when crowned king. Elizabeth and Edward's struggles to survive court intrigues and the machinations of nobles who would seek to usurp their right to rule bonds them in a way that makes their childhood struggles poignant and sympathetic.

Young Bess was nominated for two Academy Awards - Art Direction and Costume Design - and is a veritable feast for the eyes. The sets and costumes are simply sumptuous, supplemented by a gorgeous score by Miklos Rozsa. Despite liberties taken with the historical record, Young Bess brings to life a youthful Elizabeth and her struggles in a compelling, highly watchable fashion. A slick, polished example of the classic Hollywood historical epic!
Posted by Unknown at 3:53 PM

I forgot that Jean Simmons and Stewart Granger were married. It would be cool to see how their chemistry came off the screen. (You see, I like when real life couples act together =)

I'm just popping in to say that I have a blog award for you, Ruth! :) You can find it here if you're interested:

Even though this film is as far from authentic as it can get, I really loved it -- I think I still have it saved on my DVR from the last time it aired on TMC! =D

@Ella - In that case, keep an eye out for this film, I suspect you might enjoy it! :)

@Charity - Yay for another 'Young Bess' fan! :) And I agree - though this film is far from authentic, one of the things I think that makes it still resonate today is the way it brings the teenage Elizabeth to life - in some respects, anyway, that still feels very genuine and true-to-life.