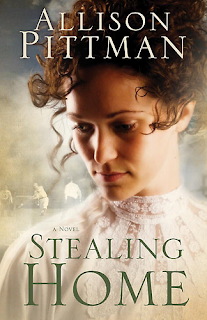 It's 1905 and the Chicago Cubs are banking on superstar Donald "Duke" Dennison's golden arm to help them win the pennant. Only one thing stands between Duke and an unprecedented ten thousand dollar contract: alcohol.

When Duke is whisked away to the one-horse town of Picksville, Missouri, to sober up in anonymity, he bides his time flirting with Ellie Jane Voyant, who would rather hide herself in the railway station ticket booth than face the echoes of childhood taunts.

Ned Clovis, the feed store clerk, has secretly loved Ellie Jane since childhood, but he loves baseball and Duke almost as much - until he notices Ellie Jane may be succumbing to the star's charm.

Then there's Morris, a twelve-year old Negro boy, whose only dream is to break away from Picksville. When Duke discovers his innate talent for throwing a baseball, Morris might just have found his way out.

Four individuals, each living in haunted isolation, each harboring a secret passion. Providence brings them together. Tragedy threatens to tear them apart. Will love be enough to bring them home?

Picksville, Missouri, is a small town intent on unchanging and steeped in tradition until a whirlwind arrives, shaking up the status quo and forcing the townspeople to re-examine their tightly held beliefs and prejudices. That whirlwind is Duke Dennison, a star baseball player forced into rehab for alcoholism, and staying sober in Picksville is Duke's last hope of salvaging a career damaged beyond recognition by his reliance on drink. The charismatic baseball player's presence in her father's home rocks Ellie Jane's carefully ordered, safe world to the core. Since a childhood incident marked her as a social pariah, the spinster ticket-taker packed her dreams away and settled into a life of social obscurity, insulated from the pain of hope and emotional risk. Ned Clovis, the deaf feed store owner, has loved Ellie Jane from afar since childhood, but it's not until his sports hero comes to town that he dares to dream of stepping outside the isolation of his cotton-wool wrapped comfort zone and vying for her favor. And Morris, the enterprising black youth whose only dream is to leave Picksville, until Duke discovers his hidden talent for baseball and gives the boy a dream of a life beyond his wildest imaginings. Through Morris, Duke begins to rediscover his passion for the game, pure and unsullied by the trappings of fame and addiction. As interest in the game dissolves barriers between class and individuals, will those who've fought so hard to maintain the integrity and safety of their isolated existences grasp the life-changing truth found in the axiom birthed from America's love affair with another sport (football) - "it's not whether you win or lose, but how you play the game"?

Stealing Home is a nostalgia lover's dream, a gorgeously realized slice of Americana, shot through with life-changing truths and the type of triumph and heartbreak as can only be found in small town community - where neighbors, whether you like them or not, are extensions of your family. If you love films like The Music Man, this is the novel for you. Pittman sprinkles her story with delicious period detail, from the local diner's food and environment to Ellie Jane's clothing to newspaper clippings chronicling Duke's rise and fall. There is a treasure trove of minutia within the novel's pages, that envelope you in Pittman's narrative until the remnants of a long-forgotten time flicker to life like the images captured in the earliest motion pictures.

Seamlessly alternating between her four main characters (third-person for Duke, Ellie, and Ned, and first-person "journal" entries for Morris), Pittman paints a vivid picture of a small town on the cusp of change, brimming with possibility that overflows when "America's pastime" takes over the town's consciousness. While Pittman excels at world-crafting, it's her characters that will burrow their way into your soul and will break your heart with their shattering, heartfelt authenticity. Ellie, Ned, and Duke, especially, each possess closely-guarded secrets and hurts that have been allowed to define their lives, and it's only as each individual slowly, carefully, gathers the courage to step out in faith and chip away at the walls that separate them do they each discover the freedom found in being truly known and loved just as they are. Morris is perhaps the most clear-sighted of the group - though his skin color sets him apart, he possesses a heart and a great capacity for vision and kindness that elevates and has the potential to unite an entire community.

Dividing the storyline into nine "innings," mirroring the baseball theme, is a gimmick that could have backfired - but Pittman's structure and narrative embrace the theme and beautifully mirror the game that unites these fragile lives, hungry for the chance to matter. Stealing Home strikes just the right balance between baseball and turn-of-the-century charm. It is a beautifully crafted novel that, like the game at its heart, is full of highs and lows and shattering heartache - only Stealing Home isn't the story of a game, it's the story of lives bravely lived, where hope is found in surrendering to the eternal promise of redemption and second chances.
Posted by Unknown at 12:46 PM

Beautiful review, Ruth!! Allison is such a GREAT storyteller, isn't she? :o)

I dont know that I would have picked up a book that revolved around baseball, but this sounds good! love the idea of 'slice of americana', particularly since Missouri is just down the road :) sounds like a really interesting book!~

@Heather - You should give this book a shot - it is SO good!