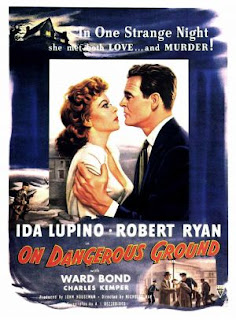 On Dangerous Ground (based on Gerald Butler's Mad eith Much Heart) is one of my favorite film noirs from the 1950s -- it's a gritty tale of a policeman at the end of his rope and the tragic case that gives him a chance at salvation. It can be argued that Ground is an odd ("off-kilter") film. On one hand you have this almost wholly unlikable antihero and a tense manhunt, while on the other hand there's this unlikely love story between the cop and the sister of a murder suspect. Melodramatic? HECK YEAH. Strangely mesmerizing and compelling? ABSOLUTELY. :) Thanks to snappy direction and charismatic leads, the seemingly disparate storylines manage to work.

Robert Ryan plays Jim Wilson, a horrible, horrible policeman whose lack of a life outside of work has warped him into depressed, angry man, prone to excessive use of force in his "investigations" -- a real live wire! I really love how the film sets up the difference between Jim and his less crazy partners, "Pop" (Charles Kemper) and Pete (Anthony Ross). Pop and Pete each have concerned and loving families seeing them off to work. By contrast, Jim spends his dinner obsessing over mug shots (and has this pathetic sink in his apartment that I kid you not, looks like it comes to Ryan's knees -- as a tall person I sympathize). Jim has an appalling lack of perspective in his life -- a fact whose negative implication is quickly born out over the course of the next half hour where he beats two suspects nearly senseless. His boss sends Jim out of town to assist with an investigation -- an exile that the embittered cop, full of self-loathing for who he's become (and, this is key, having lost hope that he can be saved), little realizes will save his life.

Before I start dissecting Jim's journey towards redemption, I have to discuss some of the more technical aspects of the film's city scenes. On Dangerous Ground is direct by Nicholas Ray, perhaps best-known for the teenage-angst-ridden classic Rebel Without a Cause (the IMDB lists Lupino as an uncredited director as well). However the directorial duties played out, Ground features some truly fascinating, ground-breaking camera work and the use of light and shadow to heighten emotion and tension is particularly striking. When Jim and his partners are on patrol, the film puts a camera in the car with them, giving you their perspective and thrusting the viewer straight into the action. A hand-held camera was also employed for the foot-chase scenes. Instead of relying on the more conventional "static" camera angles, this film is intent on putting the viewer right in the middle of the story's tensest moments, and it works, brilliantly aided by a stellar Bernard Hermann score. Between Jim's shocking (for 1952) propensity for violence, the camera work and the way the city is shrouded in dark, oppressive shadow all play to the idea that Jim is a character literally drowning in the dregs of society, because he hasn't anchored his life to anything pure and meaningful.

Things start to look up for Jim when he's sent to the FRIGID NORTH to assist in a manhunt for the perp who killed some poor girl on her way home from school. Now, if you've never seen this film you might be tempted to think that Jim's northern exile means all sorts of depressing things like bleakness and aloneness, etc. And sure -- there is some of that, but the film saturates Jim's drive (again, much of it seen from the driver's perspective) north with light. There's an emptiness to the snow-covered land, but it's coupled with a purity that you can see start to work on Jim even before he liaises with the posse. 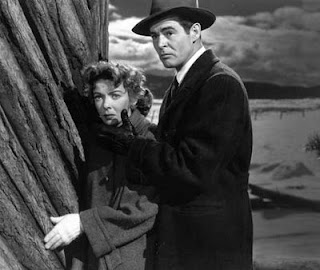 And what a posse it is -- the manhunt is just bizarre, because everyone seems to swarm around the countryside like ants or something, with no apparent regard for order or not stomping out their suspect's trail. It's a little nuts, especially because Jim comes off as being the reasonable one, like "let's interview witnesses," etc., and everyone else is all forget about THAT, city boy! Given what we've seen Jim do when he's coming off as level-headed you KNOW something's up, just sayin'. So Jim partners up with the victim's grief-stricken, revenge-mad father Walter Brent (Ward Bond), and they start running every which way, through the snow. And if you're at all like me you will find the fact that Jim is wearing dress pants and (presumably) city shoes while wading through knee-high snow drifts VERY distracting. The fact that Jim's legs don't freeze off at the knees is as much a miracle as his eventual transformation.

After A LOT of running, and a pretty spectacular single-car wreck on an icy road, Jim and Walter stumble on a desolate farmhouse inhabited by the beautiful Mary Malden (Lupino). Jim quickly deduces that Mary is blind (Walter is a little slow on the uptake), and is immediately smitten with her beauty and grace. I love watching Ryan watch Lupino in their scenes together. He takes the too-tightly wound character of Jim and throws himself into showing the powerful impact meeting Mary has on Jim's psyche -- though she may live in darkness, she is the light to his black despair, and her faith in him gives him something to live up to. Mary's blind faith (no pun intended) gives Jim a lifeline, a reason to want to be a better man, a goal to strive for -- and so he promises to do everything in his power to ensure that her crazy brother gets a fair trial.

Lupino and Ryan complement each other extremely well in this film, giving what in other hands could've been an extremely sappy, silly love story a nice measure of depth and gravitas. Lupino, with her exotic good looks and slightly gravelled, low-pitched voice was something of a fixture in film noir, making appearances in Moontide, Road House, and They Drive By Night to name a few. Likewise, Ryan was a fixture in noir and western pictures, often playing harsh, aggressive characters thanks to the presence and laser-like intensity he brought to the screen. Notable films include Crossfire, The Naked Spur, and The Longest Day. I love their on-screen chemistry, and I never tire of watching Ryan fall for Lupino. For all their characters' differences, Mary struggles with loneliness and trust just as much as Jim. I'm a complete sucker for redemption stories like this, where broken people find hope and healing and second chances, and Mary and Jim hit all the right notes, despite the at first blush improbability of their romantic pairing.

When Jim fails in his mission to "save" Mary's brother, he's so crushed it just KILLS ME, and there's this moment when you fear that he's given up on his newly-awakened hope for a better life. As cliched as the ending of On Dangerous Ground might be, in my view it is the perfect ending to a film that at its core is about people fighting their way free of the chokehold of despair. Sure, Jim and Mary will have their challenges -- but we're left with hope. A hope that's anchored by Ryan's believably nuanced performance from a character brimming with rage and self-loathing to a man whose heart has been melted by a chance encounter with a woman who dared to have faith in him. Literally and figuratively Mary becomes Jim's "safe harbor" as he's navigated the "dangerous ground" of the criminal world, once at risk of being completely consumed. Their relationship and Jim's transformation are the unexpected emotional core of the film, and are what makes On Dangerous Ground one of my all-time favorite film noir classics.
Posted by Unknown at 1:23 PM

Hi, Ruth, my daughter, Gabrielle (Ella) suggested I visit your blog because I am a huge classic movie fan. I just reviewed this movie a couple weeks ago on my classic movie blog.

I am a HUGE Robert Ryan fan...he's about my 5th or 6th favorite actor of all time. Gabrielle told me I was INSANE to like him even more than I like Jimmy Stewart, but I do. Go figure!

I'll be following your blog, as I love to read others' reviews of classic films. With just a few exceptions, I really feel that Hollywood just doesn't make 'em like they used to!

@Patti - Hi and thanks for stopping by! I took a quick look at your classic movie blog and LOVED your reviews, I'll be coming back! :)

I think Robert Ryan is a bit overlooking in the grand scheme of classic film-dom, don't you? LOVE him in this movie.