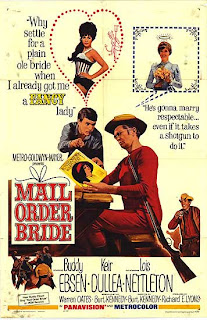 I should not like this movie as much as I do. No, no I should not like it much at all, considering I am almost, without fail, violently *ahem* allergic to prairie-type romances. But 1964's Mail Order Bride is an exception, thanks to its zippy pace, laugh-out-loud funny moments, and Buddy Ebsen's turn as a long-suffering and reluctant matchmaker. Based on a short story by some person named Van Cort that appeared in The Saturday Evening Post, Mail Order Bride is a nice little reminder that Ebsen's career consisted of a lot more than his stint as Jed Clampett on The Beverly Hillbillies.

Ebsen plays Will Lane, an aging ex-lawman who travels to the town of Congress, Montana, to fulfill a friend's dying wish - that Lane "mentor" his friend's wild son and hold his property in trust for him until such a time, if ever, that Lane deems the son responsible enough to take charge of his inheritance. The son in question is Lee Carey, played with a rather kinetic mix of energy and petulance by actor Keir Dullea. (Side note: Isn't he GORGEOUS?) 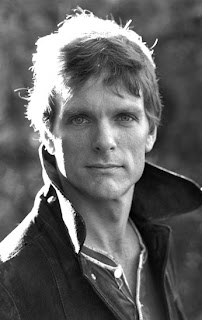 Dullea was apparently something of a name in the 1960s thanks to starring in films like The Thin Red Line, Madame X, and 2001: A Space Odyssey. Anyways, back to Lee...basically, he is SPOILED ROTTEN and has no apparent desire to make anything of his life, instead choosing to while away the hours drinking, gambling, and carousing with his merry band of wild west frat boys and the town's sole loose woman, if you catch my drift. Lane decides this will not do, no this will not do AT ALL. However, as Lee proves remarkably stubborn, Lane determines that his only hope of salvation is to marry the kid off. With the help of the latest catalog from the outhouse (really - HA!!), Lane compiles a list of potential mail order bride applicants and travels to Kansas City to interview the lucky women (HA! again).

I think what I love most about this film is Ebsen's performance - he's so upright and unflappable and determined that come hell or high water he's going to save his friend's son from self-destructing - basically, the living, breathing embodiment of the "honorable cowboy." Lane's stubborn insistence on dragging Lee to salvation provides the film with most of its humorous moments, as Lee and his Gang of Stupid get wildly frustrated with the fact that Lane ALWAYS WINS. The only time he gets remotely rattled is on the "bride" interviews. After meeting a couple of wildly unsuitable candidates, Lane wanders into Hanna's Saloon, where he meets Hanna, a.k.a. Carrie (Marie Windsor). Turns out Carrie, sick of saloon life, wrote the ad, but since she's a bit too old for Lee she sends her UNNATURALLY VIRTUOUS FOR WORKING IN A SALOON maid, Annie (Lois Nettleton) and her young son off with Lane. As an added bonus she throws out the teaser that she doesn't think Lane is half bad, so he can chew on THAT surprise all the way back to Montana, thank you very much.

When Lee and Annie meet, sparks fly, but of course Lee doesn't want a ready-made family so he explains Lane's hold on his ranch and the two agree to a marriage in name only. (Riiigggghhhttt....that's gonna work, sure...) Look for a quick cameo appearance by Denver Pyle (a.k.a. Uncle Jesse from The Dukes of Hazzard) as the preacher who marries Lee and Annie. So while Lee and Annie fake affection and kiss in public (only for Lane's benefit of course!), the decrepit ranch starts to take shape and lo and behold, Lee can actually build a HOUSE when he puts his mind to it! He also finds himself rather rising to the occasion and filling the father role in the life of Matt, Annie's young son (Jimmy Mathers, the brother of Jerry, THE BEAVER HIMSELF), because it is an unwritten rule in this type of story that small children will make wannabe frat boys grow up.

Lee is really, really slow on the uptake, but after his "friends" nearly kill the junior BEAVER while torching his ranch, he realizes he really does love Annie and he's tired of getting ripped off. Because seriously, even in the most cliche-ridden of stories, a character has to stop with the doormat thing at some point, especially when that status is thanks to rank stupidity. Speaking of cliches, Lee gets his wedding rings from the hooker-with-a-heart-of-gold, Marietta (Barbara Luna) - in this film's world, that kind of plot twist makes perfect sense. As terribly cliched as that is, I LOVE IT. This cast is just nutty enough to make it work. *wink*

Mail Order Bride is really a good-hearted little movie, that manages to strike just the right balance between humor and action and emotion. I love the fact that it's a different twist on the familiar marriage of convenience story (you don't get much more unexpected than Buddy Ebsen as a matchmaker, just sayin'!). And the ending, where Lane leaves the new little happy family he helped create and returns to Kansas City and Hanna is PRICELESS. After all, why should the young people have all the fun, hmmm? *wink*
Posted by Unknown at 2:07 PM

I have never, ever heard of this movie, but I'm about to go find out if I can get it on Netflix! It sounds like my cup of tea! ;)

I think I've looked at this before in movie catalogs. Maybe it should be one of the rare classic movies I rent. =) Sounds cute and I've seen Lois in roles she played as more of a grandmother/mother-type character.

@Christy - It's a really cute little movie. :) Not sure if Netflix will have it, but I know TCM airs it periodically and I think they've even made it available through Comcast On Demand. Warner (http://www.wbshop.com) sells it on DVD and Windows download through their Warner Archive program. Keep an eye out for it, I think you'll like it! :)

@Rissi - I can't think, off-hand, of another movie I've seen Lois in - I need to peruse her filmography a bit closer. She reminded me a bit of a young Deborah Kerr here. Hope you get to see this one sometime!

Lois was in some "Murder, She Wrote" episodes and also the Hallmark movie "The Christmas Card." That is probably my favorite. If you've not seen it, you should really try to get a hold of a copy - such a sweet little holiday film. =)

@Rissi - Oh my goodness, was Lois the mother in The Christmas Card movie? I LOVE THAT MOVIE! :) One of my holiday favs!