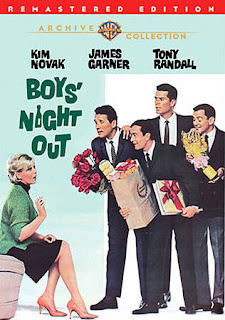 Hey, I might not be a Kim Novak fan, but I do love a silly chick flick. I should add this to my list.

I have to agree, Tony Randall always steals the show =D

Totally random question: do you know if the people who wrote Down With Love were trying to reference Kim Novak with Barbara's name?

@Ella - Isn't Tony Randall great? I love him. :) And you might be surprised by Kim Novak in this film, she seems to be having a lot of fun! ;)

@heidenkind - Oooohhh...I don't know for sure, but I wouldn't be at all surprised if that was the case! Good catch!

sounds fun! I've actually never seen anything with Kim Novak so this might have to be my first!

@Roving Reader - Keep an eye out for TCM airings, it's really cute. I really like Novak in this film and Bell, Book, and Candle.