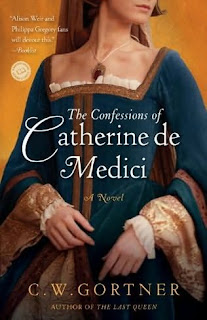 The truth is, not one of us is innocent. We all have sins to confess. So reveals Catherine de Medici, the last legitimate descendant of her family's illustrious line. Expelled from her native Florence, Catherine is betrothed to Henri, son of Francois I of France. In an unfamiliar realm, Catherine strives to create a role for herself through her patronage of the famous clairvoyant Nostradamus and her own innate gift as a seer. But in her fortieth year, Catherine is widowed, left alone with six young children in a kingdom torn apart by the ambitions of a treacherous nobility. Relying on her tenacity, wit, and uncanny gift for compromise, Catherine seizes power, intent on securing the throne for her sons, unaware that if she is to save France, she may have to sacrifice her ideals, her reputation, and the secret of her embattled heart.

Thanks to the ravages of time, the primary image of Catherine de Medici that remains is that of a black-clad, power hungry widow who dabbled in the dark arts, authorized massacres, and murdered her enemies in order to ensure her family's power. But perhaps the truth, as it so often does, lies somewhere between the black and white lines of the historical record, in the gray areas of heartbreak and triumph, wisdom and error that make up a life. From Gortner's extensive research and his solid grasp of the manners and mores of the time in which she lived, Catherine springs from the dust of history to vibrant life - not to apologize or defend herself, but to tell her story. This first-person account of Catherine's tumultuous life is a veritable feast for historical fiction lovers. With deft assurance and an insightful eye, everything from the opulence of the French court to the devastation of the 16th-century religious wars that nearly destroyed the Valois monarchy is resurrected on the page with a startling immediacy and noteworthy attention to detail, immersing readers in Catherine's world. But more than atmosphere, Gortner's recreation of Catherine reveals her to be a woman both wholly of and ahead of her time, possessed of a keen intellect and an unswerving loyalty and will to survive, her greatest strengths also her greatest weaknesses, catapulting her into legend.

Catherine was the last legitimate heir of the Medicis and as such she was raised to be a political pawn, but never a queen. As an child she endured over two years as a hostage when Florence overthrew Medici rule; when she was freed her uncle Pope Clement IV sought to cement an Italian alliance with France via marriage. At the age of fourteen, Catherine wed Henry, the second son of France's Valois king, Francis I. Possessing commoner antecedents, prestige-wise the marriage was a coup for Catherine, who as an outsider had to fight for acceptance in the elitist French court. When the unthinkable happens and Henry becomes France's presumptive heir, Catherine's first fight for survival pits her against her husband's long-time mistress, as she must produce heirs if she hopes to protect her position at court. Gortner spins an engrossing yarn as he reveals how, in her formative years, the disappointment and trials Catherine overcame in her marriage set the stage for the iron-willed regent she would famously become. Gortner strips away the veneer of quiet, unquestioning subservience with which it is easy to carelessly characterize historical women and reveals how Catherine's trying youth served as a proving ground for her quick whits and her apparently fathomless capacity for survival agains all odds.

As fascinating and heartbreaking as I found the first third of the novel detailing Catherine's fight to establish herself as a worthy French queen, the last two-thirds of her Confessions took my breath away. Following her husband's death, Catherine was thrust into a fight to secure her sons' inheritance that would consume the remaining thirty years of her life. The "Protestant problem" that was an irritant to the Catholic French court when Catherine first arrived in France balloons into all-out religious wars. Gortner paints Catherine with a forward-thinking eye to religious tolerance (most controversial in the age of the Inquisition), but when negotiation would fail, the one point Catherine refused to compromise on was anything that would compromise her sons' legacies as France's legitmate rulers. Catherine possesses an admirable and fierce love for her offspring that blinds her to their faults and the resentments that foster thanks to her eagle-eyed focus on protecting the throne, their inheritance. Gornter delivers an unvarnished, honest and heart-rending portrayal of the personal toll Catherine's family and dynasty-centered focus took on the lives of her subjects as well as herself. This culminated in the tragedy of the 1572 St. Bartholomew's Day massacre, a wave of violence against French Protestants the blame for which history has laid largely at Catherine's door.

Gortner has an extraordinary gift for bringing history to life and delivering page-turning, thoroughly engrossing reads. He brings Catherine to vibrant life, the intoxicating mix of her strengths and weaknesses, giving - perhaps restoring - credit due her for triumphs and advancements that has been lost to the passage of time. But more importantly, he doesn't shy away from his leading lady's errors and poor judgements that resulted in both personal and national tragedy and turmoil. In Confessions, Catherine emerges as a fully realized woman, both gloriously strong and tremendously flawed. Gortner's recreation of one of history's most infamous and controversial women is a page-turning triumph from start to finish, a powerful reminder of the fallible humanity behind the legend. Catherine's was a life fully lived, epic in every sense of the word.
Posted by Unknown at 1:30 PM

I read this book last year and at first did not know much of Catherine de Medici. I first read Gortner's words when The Last Queen came out. I have always been fascinated with European history and that story of Juana and her husband intrigued me to read more of this authors work. I agree with you, that Gortner has a wonderful gift for bringing history to life, as some of this particular might be fictional, he writes it so convincingly, that you never know...it can be. Anyways, I agree again, this novel was indeed epic!

@Marissa - Thanks for stopping by my blog! I'm sorry it's taken me a while to respond to your comment.

I have yet to read 'The Last Queen,' so I'm looking forward to diving into its pages (hopefully soon). Great to meet another fan! :)