Come Live With Me 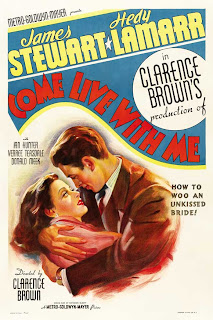 Come Live With Me is one of a string of romantic comedies that James Stewart made in the 1930s that saw Stewart play the romantic lead before his "aww shucks everyman" persona saw him transition to suspense, western, and more "fatherly" roles in the actor's post-World War II career. Apparently Stewart's co-star, the lovely Hedy Lamarr, received some of her best acting notices for her performance in this film. Starring opposite a star of Stewart's persuasion, that should come as no surprise. *wink* Come Live With Me is a sweet-natured, charming confection from start to finish, necessary viewing for fans of Lamarr and especially Stewart.

In a case of life (vaguely, at least) imitating art, Lamarr's character in Come Live With Me is an Austrian political refugee, illegally staying in New York after her visa expires rather than face deportation back to Nazi-occupied Austria. (In real life, Lamarr was the only daughter of Jewish parents who married Viennese arms manufacturer Friedrich Mandl, a Jewish Nazi sympathizer. In 1937 Lamarr fled the marriage, obtained a divorce in London, and arrived in Hollywood in 1938.) Johnny has been carrying on an affair with Barton Kendrick (Ian Hunter, King Richard in The Adventures of Robin Hood), a publisher who is apparently in some sort of "open marriage" that allows him to carry on his romantic shenanigans with the "blessing" of his wife Diane (Verree Teasdale) - or so he THINKS, because in reality good ol' Barton is a classic example of male STUPIDITY. :P (Really, the thought that Lamarr would choose Barton over Stewart is in my mind proof the woman could act!)

Johnny's happy times in the US are in peril when I.C.E. raids her apartment (I exaggerate, but the result is the same - also, were immigration officials referred to as I.C.E. agents in 1941? Who cares --) to kick her out of the country because of her flagrant disregard for visa expiration dates. But the I.C.E. agent takes pity on Johnny, urging her to get married ASAP so she can stay in the good ol' US of A (I'm sure immigration officials LOVED that). Johnny's in a quandary - she doesn't want to get deported, but the man she's in love with is married and she doesn't want to be the cause of a divorce that would hurt his wife (gotta love that reasoning - *sigh*). But the perfect solution drops in Johnny's lap when she meets Bill (Stewart), a penniless writer with a bit of a chip on his shoulder (because no one wants to publish his great American novel). She proposes a marriage of convenience - his name allows her to legally stay in the country, while she provides him with $17.80 a week in living expenses (SERIOUSLY! I cannot wrap my head around how CHEAP that seems!) so he can continue to write. And we all know how marriages of convenience end in romantic comedies, right? They remain STRICTLY PLATONIC of course! (Riiiigggghhhtttt...) :)

I really just love watching Stewart in this movie, as he's at his adorable best falling in love with Johnny through their once a week meetings and writing his best work inspired by his fascination with her and their extremely unorthodox arrangement. Seriously, how can you not love a guy who insists to his divorce-minded, recalcitrant bride that they must get to know each other before they can get divorced - so he "kidnaps" her and takes her to his grandmother's house. 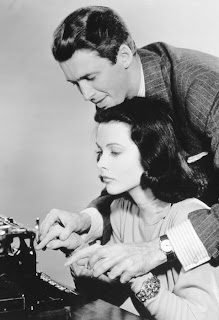 And Bill's grandma is a pistol. Come Live With Me was Adeline De Walt Reynolds film debut - at the age of 79! Reynolds must've been QUITE the lady. She raised four children after her husband's death in 1905, survived the San Francisco earthquake of 1906, and entered college in her 60s, graduating at 70. And then, THEN she embarked on a film career that would last nineteen years! Talk about INSPIRATIONAL, just sayin'! Even though she doesn't appear until the film's final third, Grandma's folksy wisdom and humor are central to the love story, playing a large part in softening Johnny's heart towards Bill.

If you think about the ending too hard, you won't be able to watch this film with a straight face. I am convinced that only Jimmy Stewart could deliver the whole spiel about firefly mating habits with a straight face and manage to come off as earnestly romantic in the bargain. Between delivering a toothbrush, the firefly speech, and reciting Christopher Marlowe if you allow yourself to surrender to the romanticism of the moment, you cannot help but be charmed by this film and Stewart's off-the-charts adorableness. A wonderful showcase for Stewart's understated brand of charisma and featuring one of Lamarr's best performances, Come Live With Me is a sweet treat for classic film fans.

"The Passionate Shepherd to His Love" by Christopher Marlowe

Come live with me and be my love,
And we will all the pleasures prove,
That Valleys, groves, hills, and fields,
Woods, or steepy mountain yields.

And we will sit upon the Rocks,
Seeing the Shepherds feed their flocks,
By shallow Rivers to whose falls
Melodious birds sing Madrigals.

And I will make thee beds of Roses
Andd a thousand fragrant posies,
A cap of flowers, and a kirtle
Embroidered all with leaves of Myrtle;

A gown made of the finest wool
Which from our pretty Lambs we pull;
Fair lined slippers for the cold,
With buckles of the purest gold;

A belt of straw and Ivy buds,
With Coral clasps and Amber studs:
And if these pleasures may thee move,
Come live with me, and be my love.

The Shepherds’ Swains shall dance and sing
For thy delight each May-morning:
If these delights thy mind may move,
Then live with me, and be my love.

With a taste in poetry like that, one wonders why Bill felt the need to go off on his fireflies tangent. *wink*
Posted by Unknown at 9:43 AM

I LOVE this movie--Jimmy is my favorite old movie actor and in this, he is just so darn cute! I have to agree with you, no one could deliver the ending as well as Jimmy. He does it with a combination of sincerity and sweetness, yet it is still funny, if you know what I mean.

Do you notice how Jimmy uses a lot of the same mannerisms in his films? Or certain phrases? I seem to catch them all the time =)

Okay, here is one for you--have you ever seen "Vivacious Lady" with Jimmy Stewart and Ginger Rogers? We just watched that one recently and it never gets old!

I'm LOVING reading about these classics I've missed! You find the best stuff! One of these days I'll get to sit down and watch some of them for myself. :)

@Ella - I know EXACTLY what you mean about Jimmy - that man had the perfect balance of sincerity and sweetness AND humor - I completely agree! :)

And you know, I don't think I ever stopped to think about his recurring mannerisms/quips, but great call! It makes one wonder how much of what we see on-screen was just him!

I started watching 'Vivacious Lady' last time it aired on TCM, but I sadly was unable to finish it! I'm definitely going to keep my eyes out for repeat broadcasts because from what I saw it looked right up my alley - super cute!

@Anne - Thank you so much for your sweet feedback! I love classic movies so much I'd be writing about them even if no one was reading, but I confess I LOVE it when I hear someone discovers a new favorite after I write (read: gush) about it. So thank you!! :)